Medvescak finally got off the mark with a comfortable home victory over struggling Severstal, but CSKA’s winning start to the season came to an end in Minsk.

Goalie Kevin Lalande made his debut for the Army Men on his return to the arena where he previously played for Dinamo Minsk, but his former colleagues ensured it was an unhappy return.

Charles Linglet opened the scoring in the fourth minute as the home team made a lively start and Artur Gavrus doubled that lead before the first intermission.

Linglet then turned provider, claiming an assist on Ryan Vesce’s power play effort early in the third before CSKA stepped up a gear.

The visitors led the shot count 13-3 in the middle session, and Vladimir Zharkov got them on the scoreboard just after midway. The third period was even more one-sided, with CSKA registered 15 unanswered shots on Lars Haugen’s net, but only one, from Stephane Da Costa, found its way to the target as Dinamo held on for a 3-2 win.

In Zagreb things were rather more comfortable as Medvescak ended a four-game losing streak in its first home game of the campaign.

The Croatian team put on a show for its fans, powering into a 4-0 lead by the 34th minute. Andrew Hutchinson was the architect of first period goals for Martin St.Pierre and Nathan Perkovich before Mark Katic and Pascal Pelletier extended the lead in the second.

Severstal got a goal back in the 39th minute, but Medvescak continued to have the better of the game. The teams traded third-period goals and Bill Thomas hit the bar with a penalty shot as the Bears handed a 5-2 mauling to Severstal. 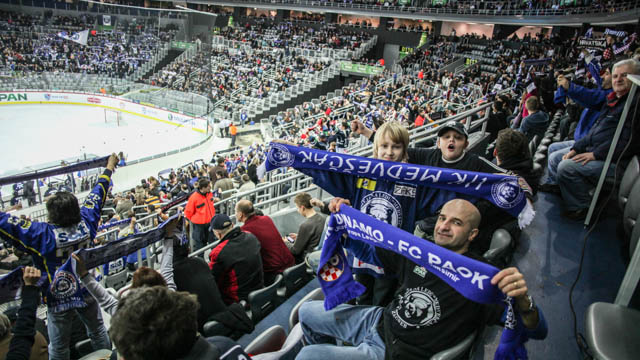 Salavat Yulaev got the better of Amur in the first of back-to-back games between the two teams. Denis Tolpeko opened the scoring in his first game back from injury, and Alexei Glukhov’s deflected shot in the third period made it 2-0. Vladimir Sokhatsky made 36 saves to record his first ever KHL shut-out.

Jarkko Immonen’s shoot-out winner gave Torpedo the verdict following a 2-2 tie at Slovan. The Finn had a productive night, picking up 1+1 in the first period, but Slovan’s hot shot Ladislav Nagy tied it up in the second to take the game to extras.