Dynamo Moscow held on for a morale-boosting 3-2 victory at home to Ak Bars, and offered some signs that Harijs Vitolins and his team are putting the disappointments of their first two games behind them.

The Blue-and-Whites led three times on the night, but still had to endure a nervous finale as Ak Bars piled on the pressure in the third period.

The opener came in the 11th minute as Dmitry Vishnevsky ripped home a one-timer off Filip Novak’s pass to the point, but penalty trouble helped Ak Bars tie it up before the first intermission. Dynamo survived a 5v3 PK, but couldn’t kill the remaining penalty. Oskar Moller’s shot from the blue line was screened by Alexander Svitov and Alexander Lazushin could not react fast enough.

The home team went back ahead at the start of the second when Konstantin Gorovikov found the top corner after just 17 seconds but Fyodor Malykhin tied it up after winning a determined battle on the slot and forcing the puck home.

This time parity lasted less than a minute, though. Denis Mosalyov scored on a wraparound to make it 3-2 and this time the lead held – just.

Ak Bars pushed hard in the third, aided by two penalties on Gorovikov. But the Kazan team’s best chances went astray: Alexander Burmistrov fired just over from an acute angle after space opened for him in the right-hand circle then Lazushin slid sliding nimbly across his crease to block an Artyom Lukoyanov effort on a 2-v-1 breakaway.

Ak Bars pulled goalie Emil Garipov with 53 seconds left but the gamble did not pay off: Dynamo twice missed the empty net, and ran down the clock with greater comfort than it had played much of the closing stanza. 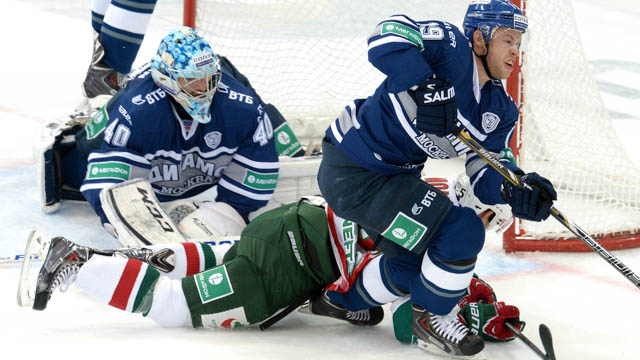 Helenius denies Traktor
Jokerit had goalie Riku Helenius to thank as its first KHL road game ended in a narrow 2-1 win at Traktor. The netminder had 31 saves in a game-winning display that enabled his team to come from behind and take the points.

Stanislav Chistov opened the scoring deep in the first after Kyle Wilson fed the puck temptingly across the face of goal, but that advantage did not last long. Juhamatti Aaltonen tied it up 55 seconds into the middle stanza, scoring on a strong burst down the left.

The winner came right at the end of the second, Ryan Gunderson converting a Jokerit power play with a powerful effort from the blue line. The Finns defended solidly in the third to keep Traktor at bay and make it three wins from four in the KHL. Traktor suffers a second defeat in succession. 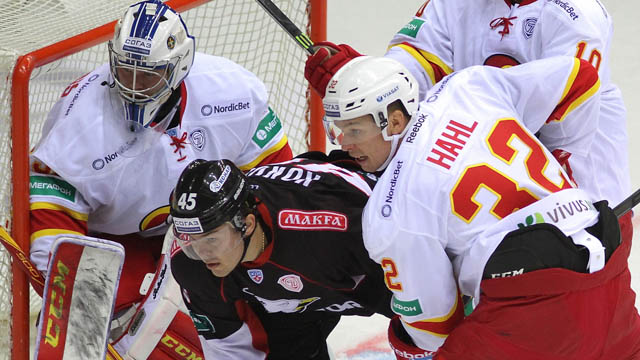 Kovi’s treble
Ilya Kovalchuk led from the front for SKA, scoring a hat-trick in his team’s 4-2 win at Lada.

Petersburg’s star man opened the scoring on a fourth-minute power play, and Tony Martensson doubled that advantage midway through the first period.

Lada made a game of it, with Stanislav Bocharov and Martin Zatovic finding the net, but Kovalchuk added two more of his own in the third to maintain SKA’s 100% start to the campaign.

Magnitka marches on
Danis Zaripov was the star man for Metallurg Magnitogorsk, scoring twice to lead his team to a comfortable 4-1 win at Lokomotiv.

Both his goals came in the opening period. First he finished off a fine move involving his partners Jan Kovar and Sergei Mozyakin, then he fired home from a tight angle of another Mozyakin assist.

Things didn’t improve much for Loko: an unsuccessful power play ended when Sergei Tereshchenko came straight off the bench to fire home a one-timer with his first touch and Yaroslav Kosov made it 4-0 midway through the third.

Yegor Yakovlev got a consolation goal for the hosts, but there was no denying Magnitka.

Sibir fightback in vain
Sibir clawed back a 0-3 deficit at home to Avangard – but still ended up losing 5-3. Sergei Shirokov was the star man with a hat-trick for the Omsk team, but Sibir’s Alexei Kopeikin will be disappointed to finish on the losing side after scoring twice.

It had seemed so easy for Avangard early on. Shirokov scored two and Kirill Lyamin added a third shortly after midway. But three goals in 10 minutes either side of the second intermission – Andreas Thuresson adding to Kopeikin’s contribution – tied the scores with 13 minutes to go.

Avangard kept its nerve, though. Sergei Kalinin made it 4-3 in the 51th minute and Shirokov put his third into an empty net to seal the win. 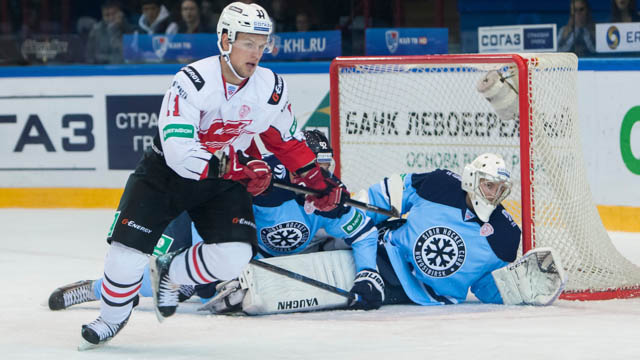 Barys wasted little time in overpowering Metallurg Novokuznetsk. The Astana team won 5-2, with all the goals coming inside the first 32 minutes. Dustin Boyd’s double early in the second period proved decisive, stretching Barys’s lead to 4-1 and leaving no way back for the hosts.

Dinamo Riga edged Neftekhimik with a 3-2 verdict in Nizhnekamsk. All the goals came in the middle session, with Lauris Darzins claiming the game-winner.

Vityaz blitzed Avtomobilist with three goals early in the third period to cruise to a 6-1 victory in its first home game of the season. The teams were locked at 1-1 after 40 minutes, but Robert Kousal, Roman Horak and Anton Korolyov took the game away from Avto in the space of five minutes. 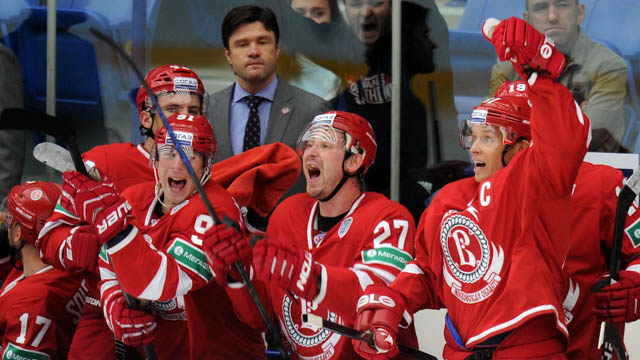