And it took two goals from defenseman Anton Belov – not a man noted as a free-scoring blue-liner – to give SKA an unexpectedly hard-fought 3-2 victory against a Sochi team that belied its status as an outsider and played a vibrant role in an engrossing contest on the shores of the Baltic.

Defenseman Andrei Pervyshin took the honor of the Black Sea team’s first ever goal in a competitive match, lashing home a one-timer from the point off a Pavel Koledov pass.

SKA could hardly say there was no warning: a menacing Mikhail Anisin raid had earned Sochi the first power play of the game, and as soon as the game went to four-on-three the visitors converted the advantage.

At the other end Ilya Kovalchuk went close as SKA enjoyed its first power play of the night, but there was more danger for the home team when Ilya Krikunov went in search of a wraparound and fired his shot narrowly wide.

That bright start couldn’t last, though. SKA steadily tightened the screws as the game went on and apart from one smart save from Alexander Salak early in the second there was little beyond some smart goal-tending from Tomas Popperle and some committed defense from Mark Olver to suggest the home team wouldn’t find its way back into the game.

Sadly it was slack defense that handed Belov the equalizer as the game reached its midway point. The SKA blue-liner burst out from his own zone leaving Pervyshin caught between two options and ultimately showing his opponent a clear path to the goal.

A home power play quickly brought a second goal: Evgeny Dadonov’s shot got tangled in a flurry of skates around the crease and Artemy Panarin reacted first to score a tap in.

But that wasn’t the end for Sochi. Early in the third Krikunov sought another wraparound and this time his wrist shot flew over Salak’s shoulder and just under the bar. There were a couple more chances at either end and for a moment the visitors could dare to dream of an unexpected win.

However Belov had the last word, ripping a one timer inside Popperle’s post off a Panarin pass to seal SKA’s second success of the season. 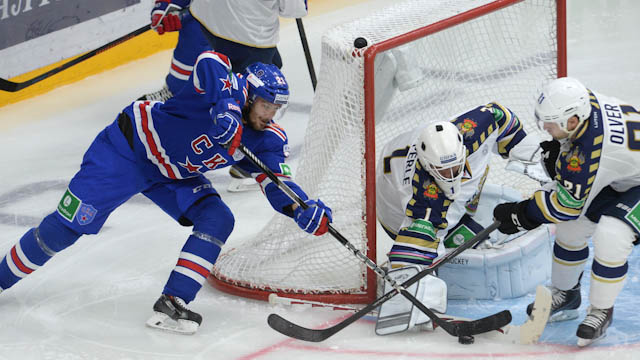 Slovan stuns the champion
Ladislav Nagy is turning into the star man of the early stages of this season. The Slovak forward followed up a hat-trick in his opening game with a sensational game-winner to give Slovan a memorable 3-2 victory at Metallurg Magnitogorsk.

He scored from a tight angle with 10 minutes to play, and goalie Johan Backlund did enough to keep Magnitka at bay until the hooter.

The victory was deserved: Slovan bounced back from conceding a power play goal on four minutes to Jan Kovar (assisted, inevitably, by Sergei Mozyakin). Unusually, though, that was the end of the scoring contribution from Magnitka’s first line. Instead Vaclav Nedorost tied it up five minutes later, putting away the rebound from a Nagy shot. And Slovan took the lead late in the first when Milan Bartovic scored off a great Rok Ticar pass to stun the home team.

Evgeny Grigorenko made it 2-2 midway through the second but even though Metallurg always outshot Slovan there was no further scoring until Nagy’s decisive effort. Magnitka won its first seven home games last season: this time the team tasted defeat on its second outing in own building. 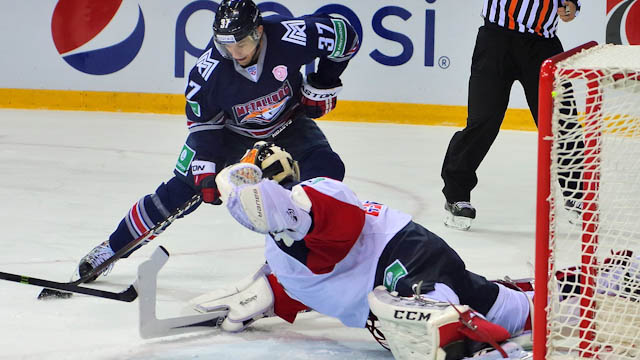 Jokerit claims first victory
After an overtime defeat on its KHL debut, Helsinki’s Jokerit bounced back to sink Lokomotiv 3-2 – thanks largely to a double from ex-Loko forward Niklas Hagman.

Hagman, who also scored on Thursday against Dinamo Minsk, opened the scoring here in the third minute, converting the rebound from a Ville Lajunen shot.

Jiri Novotny cancelled that one out before the first intermission, but in the second stanza Hagman struck again just before midway, finishing off some strong work from Juhamatti Aaltonen. Linus Omark quickly extended that lead and the home team held off Loko’s third-period response, killing a two-man penalty along the way. Sergei Plotnikov got one back with 90 seconds remaining but it wasn’t enough to save Loko from a second defeat of the season.

Atlant downs Ak Bars
There was a rude wake-up call for Ak Bars as the Kazan team went down to a heavy defeat at home to Atlant.

Matt Gilroy laid the foundations of the 4-1 scoreline, setting up Andreas Engqvist’s first-period opener before doubling the lead himself midway through the second.

Veteran Vyacheslav Kozlov scored his team’s third power play goal of the night 25 seconds into the third to leave the home team with too much to do. Oscar Moller’s consolation goal was trumped by an empty-netter for Ondrej Nemec to finish it off.

Avangard sinks Admiral
Avangard bounced back from its opening game shock at home to Metallurg Novokuznetsk with a 4-2 home success against winless Admiral.

The decisive passage of play came late in the second period as the home team scored twice in a minute to snap a 1-1 tie. Summer arrival Denis Parshin got his first goal in the black jersey of Avangard on the power play, then defenseman Nikita Pivtsakin followed up with what proved to be the game winner.

Enver Lisin struck with 10 minutes left to give Admiral hope, but Sergei Shirokov made the points safe with a 58th-minute goal. 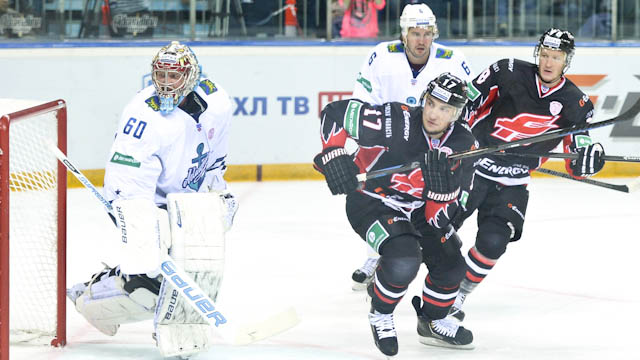 Salavat Yulaev thrashed Vityaz 6-1 despite conceding an early goal to Mario Kempe. The home side turned the game around to lead 2-1 at the first intermission, but after a goalless second stanza it all went wrong for Vityaz in the third as the Ufa team scored four times from six shots on goal. Alexei Kaigorodov stretched the lead, and two goals from Dmitry Makarov paced Salavat Yulaev to a convincing win.

Igor Yemeleyev scored on 59:15 to complete a dramatic 3-2 win for Avtomobilist at home to Medvescak. The Zagreb team opened up a 2-0 lead through Anthony Stewart and Pascal Pelletier, but Jakub Petruzalek produced a goal and an assist in quick succession to tie the scores by the end of the second.

Nigel Dawes followed up Thursday’s hat-trick with the decisive penalty shot as Barys beat Amur in a shoot-out. Earlier the teams traded four goals with Ruslan Bashkirov scoring for Amur for the second game in a row.

Traktor bounced back from its opening defeat in Nizhnekamsk to inflict a second loss on Severstal. Denis Abdullin settled a 3-2 verdict early in the third; Pavel Buchnevich had 1+1 for Severstal.

Ugra made it two wins from two after coming from behind at Torpedo. Juuso Hietanen gave the home team a first-period advantage but goals from Andrei Sergeyev, Sergei Lesnukhin and Ben Maxwell led Ugra to a 3-1 success.

Dinamo Riga opened up with a 4-2 win at home to its namesake from Minsk. Pyotr Schastlivy marked his Dinamo debut with 1+1 while Oscars Cibulskis claim the game-winner. Jonathan Cheechoo added 1+1 to his hat-trick in Helsinki.