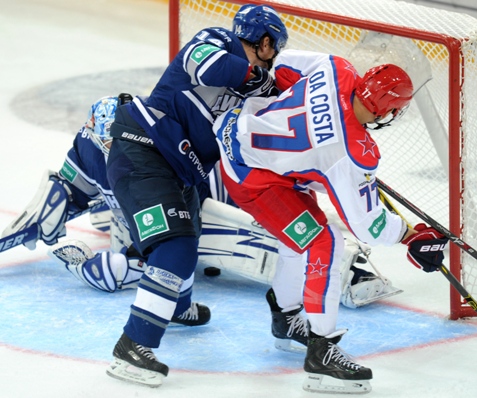 The French international made the move from Ottawa over the summer, making KHL history as the first of his countrymen to feature in the competition, and he made an immediate impact at Luzhniki.

He got his first goal in the 16th minute, touching home an Igor Grigorenko pass at the far post to snap a 1-1 tie, and followed it up seconds after the intermission with a goal on the wraparound.

That was more than enough to see off a disappointing Dynamo which, for the second game running, grabbed an early power play goal only to fold under pressure.

This time it was Nikolai Zherdev who opened the scoring, claiming his first for Dynamo in the KHL with the help of a deflection in front of Emil Galimov’s net.

But after Alexander Radulov picked up the first of his three assists to tee up Grigorenko for a beautiful one timer over Alexander Yeryomenko’s shoulder there was little resistance from the home team.

Da Costa’s finishing and a string of penalties – many of them unnecessary – handed the Army Men control of the game and gave the team swift revenge for last weekend’s Mayor of Moscow Cup defeat on the same ice.

Young defenseman Nikita Zaitsev completed the scoring on a 5v3 power play in the third to hand Dmitry Kvartalnov a winning start to competitive life behind the bench in Moscow. The former Sibir coach can look at his top line with satisfaction after bringing in da Costa ahead of young Nikolai Prokhorkin and seeing that troika fire in three goals.

For Dynamo, however, the unhappy start to the post-Znarok era continues. A team once noted for its solid character and well-balanced lines currently looks slightly out of step with itself. Small wonder Harijs Vitolins was forced to shuffle his pack during the course of the game in a bid to spark the right chemistry on the ice.