Vyacheslav Bykov’s eagerly-awaited return to KHL coaching ended with a victory for SKA over Lokomotiv – but the Petersburg team showed its qualities and problems in an entertaining 5-3 win.

Everyone knows about SKA’s powerful offense, and it took just seven seconds for summer signing Jimmie Ericsson to open the scoring, pouncing on the rebound from a Viktor Tikhonov shot. A power play effort from Yury Alexandrov doubled the advantage in the fourth minute and Loko’s new head coach Sean Simpson was forced to call an early time-out.

Whatever the former Swiss national coach said had the right effect, though: Kirill Kapustin and Geoff Platt scored to tie it up before the first intermission to remind the home fans that defensive frailties still need to be addressed here.

Two power play goals early in the second took it to 3-3: Evgeny Dadonov got a debut goal for SKA before ex-Lev man Martin Thornberg cancelled it out within a minute.

Ultimately though it fell to Ilya Kovalchuk to win it. He made it 4-3 in the 37th minute and wrapped it up with an empty-netter to rubber-stamp his return to full fitness with a game-winning 2+1 contribution. 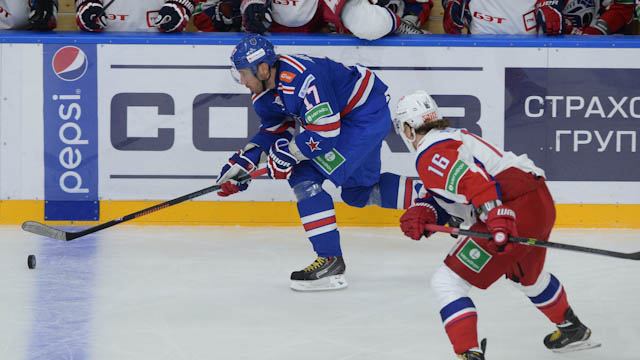 Bill’s back with a win
Zinetula Bilyaletdinov made a winning return to Ak Bars – but his team had to withstand a late rally to clinch a 3-2 verdict over Avtomobilist.

Two goals in 15 seconds late in the second stanza set up the win: Ilya Nikulin’s characteristic power play effort from the blue line was swiftly followed by a Janne Pesonen strike to give the home team a 3-1 lead. But it proved to be a nervy finish: Alexei Simakov made it a one-goal game with 10 to play and the hosts’ penalty kill was tested to the maximum in closing stages before the siren brought relief to the men in green.

Earlier the former head coach of Team Russia got a warm welcome as he climbed back behind the bench in Kazan but the first period was a hard-fought battle with Avto just shading the shooting chances. The teams then traded goals early in the second, with Vladimir Tkachyov putting Ak Bars in front only for Alexander Bumagin to tie it up.

Lada loses out on return
There was no dream return to KHL action for Lada – after a bright start the Togliatti team went down to a disappointing 2-5 defeat at home to Dmitry Yushkevich’s new-look Ugra.

For a minute, everything went right for the newcomer – Peter Podhradsky thumped home the opening goal from the blue line after just 49 seconds to delight a capacity crowd in the new Lada Arena. But that was as good as the evening got: Igor Magogin tied it up in the eighth minute and Toni Rajala put Ugra in front in the second.

The game got away from the home team in the final session –further Ugra goals put the result beyond doubt and Martin Zatovic’s power play late on was merely a consolation effort. 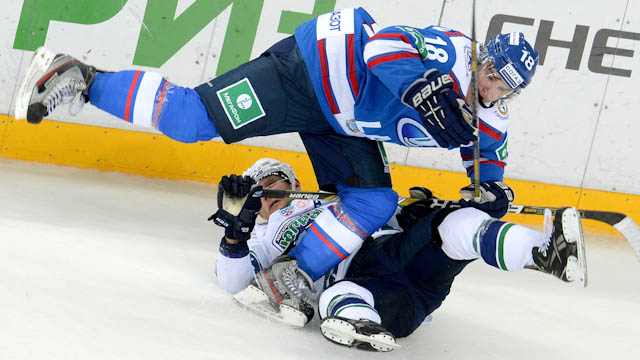 Cheechoo treble outplays Jokerit
Jokerit hosted Dinamo Minsk as KHL hockey made its Finnish debut – but the team from Helsinki could not produce a winning start at the Hartwall Arena.

A hat-trick for Dinamo’s Jonathan Cheechoo helped the Belarusians snatch an overtime victory after a thrilling 4-4 tie kept a 13,000+ crowd thoroughly entertained.

Niklas Hagman, once of Lokomotiv, had the honor of scoring Jokerit’s first KHL goal, converting a fifth minute power play. But, in a premonition of the night’s action, that lead didn’t last long before Cheechoo tied it up.

Then the third period exploded in a flurry of goals in a four-minute spurt. Twice Cheechoo gave Dinamo the lead, twice Jokerit levelled through Petr Koukal and Steve Moses.

The decisive goal came four minutes into overtime. Tommi Huhtala took a holding penalty and Matt Ellison got the winner off a Cheechoo pass. Errka Westerlund’s Jokerit must wait for its first win.

Sorokin shuts out Avangard
Young Metallurg Novokuznetsk goalie Ilya Sorokin posted his first ever KHL shut-out, making 37 saves as his team snatched a shock 1-0 win in Omsk. Alexander Komaristy got the decisive goal on a second-period breakaway. For unfancied Kuznya it’s a dream start to the season; for Avangard it’s an unwelcome reminder of last season’s struggles.

The Far East derby saw Amur and Admiral trade nine goals, with Amur claiming the verdict. The home team had to retrieve a 0-2 first-period deficit, but as an even game went into the final stanza Vyacheslav Litovchenko and Ruslan Bashkirov set up a 5-4 win.

In Astana there were two hat-tricks as Barys beat Salavat Yulaev by the same 5-4 scoreline. Finnish forward Antti Pihlstrom notched a treble inside just 12 minutes for the Ufa team, but was eclipsed when Nigel Dawes snatched a last-second winner and completed a hat-trick of his own notching 3+2=5 points in total.

Torpedo left it late to down Severstal 2-0 in Cherepovets. Dmitry Kazionov and Vadim Krasnoslobodtsev scored in the last five minutes; Ivan Kasutin made 29 saves.

A Ladislav Nagy hat-trick helped Slovan to a 5-2 win at home to Medvescak. The new signing netted twice in the opening period and wrapped up the scoring in the 58th minute. Martin St. Pierre got a debut goal for Medvescak. 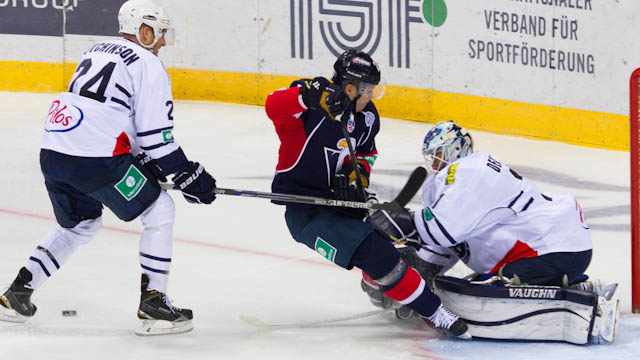