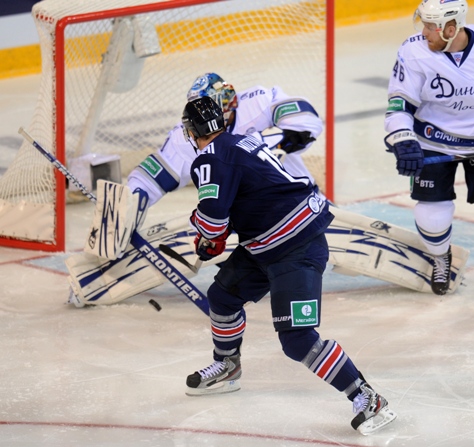 The defending champion put on an impressive display against last season’s regular season pacesetters, recovering from the shock of conceding an early goal to exert full control over the game.

And once again it was the all-conquering Mozyakin-Kovar-Zaripov line that did the damage, sharing 10 points to take the game out of reach of the Muscovites.

It didn’t take long for the action to hot up. Dynamo made a bright start, forced a penalty and opened the scoring inside the first three minutes. Filip Novak had the honor of the season’s first goal; the Czech defenseman got to the slot to deflect Alexei Tereshchenko’s pass beyond Vasily Koshechin.

But Dynamo’s delight lasted just 21 seconds before that man Mozyakin reminded everyone what he’s all about. Jan Kovar provided a smart feed from the slot and Mozyakin placed his backhander beneath Alexander Yeryomenko’s pad to tie the scores.

With Magnitka’s first line already clicking into gear, the last thing Dynamo could afford was penalties. After all, Magnitogorsk’s power play was prolific last season and it delivered once again to open up a 3-1 lead. Mozyakin picked out Danis Zaripov for the go-ahead goal before leaving Dynamo’s defense in disarray as he drifted into space and fired into an empty net. 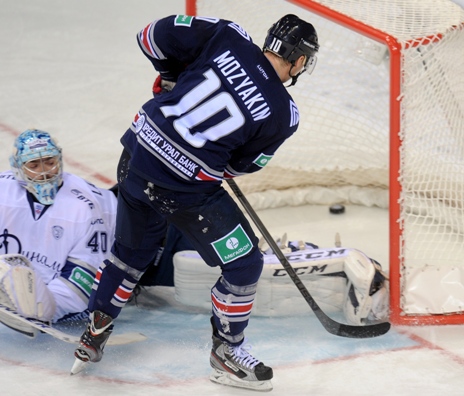 That power play was also converted, albeit in freakish circumstances. Yaroslav Kosov fired the puck back across the red line towards Maxim Yakutsenya and was as surprised as anyone when a fortuitous ricochet took it over the line off Lazushin’s skate to make it 4-1.

Dynamo was unable to get any kind of hold on the game – over the first 12 minutes of the second stanza the Blue-and-Whites were outshot 11-2. That dominance helped Mozyakin to his hat-trick: as Dynamo’s offense desperately tried to force the pace he burst onto a loose pass to set up a one-on-one, only to be fouled on his approach to goal. The subsequent penalty shot was despatched with ease, and the caps flew onto the ice as ‘Simply the Best’ boomed around the arena.

The final stanza was exhibition stuff with the result beyond doubt. Magnitka added one more goal thanks to Chris Lee’s thunderous shot from the point, completing a winning margin that eclipses Dynamo’s 5-1 opening day triumph over Traktor one year ago.