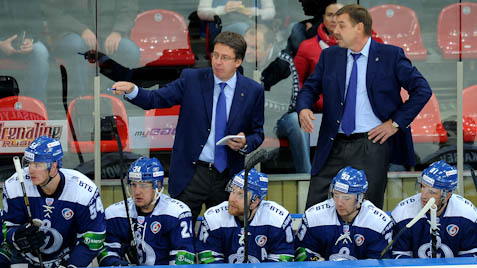 For the fourth time Dynamo Moscow finds itself playing in the Opening Cup – but it’s the first time the Blue-and-Whites will take part in the annual curtain-raiser without the familiar presence of Oleg Znarok (right of picture) glowering out from behind the bench.

Znarok, of course, has taken over from Zinetula Bilyaletdinov at Team Russia and enjoyed immediate success with a triumphant march to World Championship gold in Minsk last May. He’s staying at the club as a consultant, but the day-to-day running of the team is now in the hands of Harijs Vitolins (left of picture), Znarok’s long-serving right-hand man at HC MVD, Dynamo and the national teams of Latvia and now Russia.

Dynamo is hoping for a seamless transition: years of working closely together to build teams that have won two Gagarin Cups and a World Championship, as well as a KHL silver medal with outsiders HC MVD and a regular season title at Dynamo last time out should ensure that the Vitolins era can build on the best of Dynamo’s recent success.

It’s also worth keeping in mind that, technically, Vitolins joins two of his rivals this season, Bilyaletdinov and Vyacheslav Bykov, in winning a World Championship final as head coach. He took the lead behind the bench in this year’s 5-2 victory over Finland after Znarok was banished to the stands by the IIHF officials.

Vitolins, however, has had to contend with some high-profile departures from the roster over the summer. Leo Komarov, a fan favourite for his spiky performances in games and his cheer-leading after every victory, has returned to Toronto, while experienced defensemen Alexander Boykov and Dominik Granak have also left the club. Czech forward Marek Kvapil, a useful outlet on the third line, has also moved on to join Severstal.

To make matters worse one of the big summer signings, former Ak Bars forward Alexei Tereshchenko, picked up an injury in pre-season, slowing his progress. That ups the pressure on Nikolai Zherdev, a player with plenty to prove after last season’s struggles at Spartak and Severstal. The former Columbus, NY Rangers and Philidelphia Flyers forward retains hopes of an international recall, and knows that impressing under the guidance of Vitolins can only enhance his chances.

The other intriguing summer arrival is Kaspars Daugavins, a Latvian forward well known to his compatriot Vitolins. In Minsk the former Servette man was at the heart of much that was good in team Latvia’s play, weighing in with goals in memorable victories over Finland and the USA. Combining an eye for the spectacular play with a willingness to throw his weight around on the ice, he could be a natural replacement for Komarov, both in terms of what he brings to the team and what he offers in the locker room.

A further new face, defenseman Mat Robinson, made an immediate impact in the Mayor of Moscow Cup. His hat-trick set up a 5-3 win over CSKA to clinch the pre-season tournament and hand Vitolins his first trophy as head coach.

Overall, though, Dynamo fans will see plenty of familiar faces when the team travels to Magnitogorsk for Wednesday’s curtain-raiser. The steadying influence of Alexander Yeryomenko remains in goal, the familiar hard-working contributions of Konstantin Gorovikov, Denis Kokarev, Denis Mosalyov and others are all present and correct. The question remains – will the unique team ethos that has made Dynamo so hard to beat stay intact without Znarok at the helm? Only Vitolins has the answer. 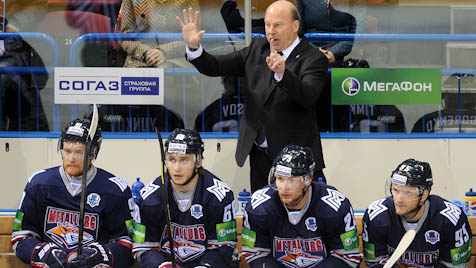 It’s been a fairly quiet summer in Magnitogorsk, with Metallurg content to keep hold of most of last season’s roster and add a couple of judicious signings to the squad.

That means defenses will once again face the torments of Magnitka’s powerful top line of Sergei Mozyakin, Jan Kovar and Danis Zaripov, a trio which posted 85 post-season points on the way to lifting the trophy.

Pre-season form suggests that they are already on their game, with Keenan reveling in the power of his forwards after they topped the scoring in the pre-season Romazan Memorial Cup. “What more do you want? You want another line like that?” he said to reporters after the troika clicked once again to down Traktor early in the tournament. “You won’t find another one like it. We just need to look for the same balance and chemistry in our other lines.”

Those other lines will continue much as before as well, with just four new signings confirmed over the summer. Of those, the most notable is probably Maxim Yakutsenya, previously with Donbass, although former Atlant defenseman Rafael Batyrshin also adds depth to the roster. For the most part, though, it’s a familiar and formidable roster heading towards the upcoming campaign.

Pre-season results have been fairly encouraging as well – a disappointing start with a poor show at the pre-season tournament in Ufa has been balanced by home success in the Romazan competition, clinched with a revenge win over Salavat Yulaev. Another traditional rival, Ak Bars, was vanquished in Kazan and Keenan is content with the preparations his team has made.

“We had a tough camp,” he said after the final warm-up contest. “Everyone worked hard and while it was difficult, everyone felt the benefit of that effort. Now we have to deal with being the team to beat, and be ready for that.”

With a roster of proven champions at his disposal, a fully-fit Magnitka is sure to see Keenan pushing hard for more silverware in 2015.