On the Russian hockey calendar, late summer is a time of serious business, with players fighting to earn the approval of their coaches in the last tournaments of the preseason. But not everywhere. In recent years a cheerful charity game, From a Pure Heart, has emerged as a popular August tradition, one which attracts some of the finest exponents of the game, past and present, as well a number of famous names from show business, big business and even the lofty heights of politics - Russia’s Deputy Prime Minister, Arkady Dvorkovich, took part in Saturday’s event, held to raise funds for the care and treatment of children suffering from serious illnesses. This was the fifth such exhibition game in the program’s three-year history and the fifth different host city. This time, following in the footsteps of Kazan, Moscow, Magnitogorsk and Tver, the venue was the Moscow Region town of Chekhov.

The choice was a wise one. Chekhov is currently celebrating its 60th anniversary, and it is a year since the town’s KHL team, Vityaz, moved back “home” to Podolsk, so the hockey-starved citizens were eager to welcome the arrival of a brigade of big-name stars. Ilya Kovalchuk and Evgeny Malkin, world class players with impeccable reputations, captained the competing teams, and they were accompanied by a band of legendary names whose presence would guarantee the success of any event - Vyacheslav Fetisov and Alexei Kasatonov, Valery Kamensky and Alexei Zhamnov, Vyacheslav Kozlov and Alexei Yashin, plus, of course, the inimitable Alexander Ovechkin and Alexander Radulov. 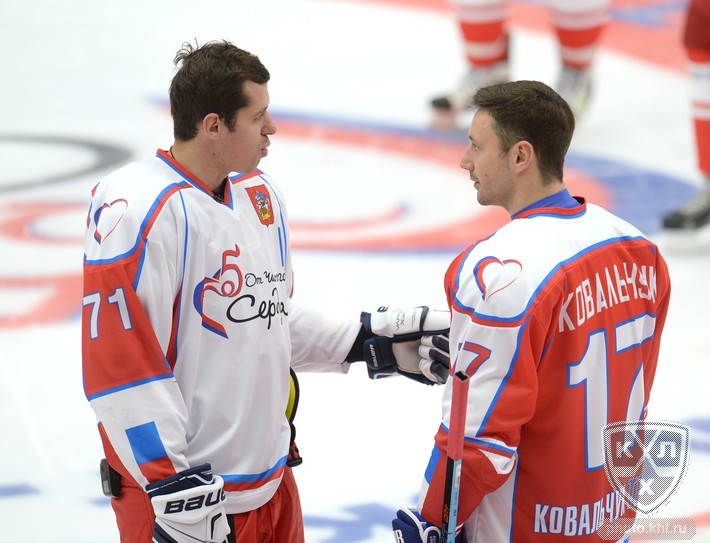 The game itself finished in a tie, and while the score, 17-17 could cause some readers to suspect complacency and a lack of discipline in the proceedings, the reality was rather different: the celebrities competed admirably, and the main mission – to delight and entertain the fans with unconventional moves and a dash of humor – was carried out in full.

The protagonists somehow managed to cram 22 goals into the first period. Kovalchuk’s red team raced into a 3-0 lead and Malkin’s men in white swiftly stormed back to gain a 5-3 advantage. In the blink of an eye, the scoreboard showed Kovalchuk was ahead again, 7-5, and then the game swung Malkin’s way, 9-7. With the final few seconds of the period ticking away and the reds 11-10 ahead, whites’ coach Vladimir Petrov pulled the goalie and his men launched an all-out assault. The tactic paid off, the game was tied, and the move even drew a respectful smile from the coach of Kovalchuk’s reds, the redoubtable Boris Mikhailov.

At this stage, the game could well have deteriorated into a mere shooting practice session, so something out of the ordinary was required for the second period. It was provided by a goaltender change in team Kovalchuk – taking his place between the pipes was … Alexander Radulov, who had already notched a hat-trick in the opening stanza. The plot took an even more unexpected turn when Kovalchuk, straight from the face-off, gathered the puck and smacked it into his own net, putting Malkin’s boys in front. The captain, it seemed, merely wanted to loosen up his new goalie, and if that was the intention it certainly worked. The larger-than-life character from CSKA Moscow produced a score of incredible saves, including one from a penalty shot and several vital stops in spells of serious play. Such exploits certainly earned him the accolade of unofficial MVP, and he even found time to put away a penalty shot at the other end. Swashbuckling stuff, as ever, from Radulov.

There were more surprises in store for the grateful Chekhov public. Deputy PM Dvorkovich enjoyed shifts for both teams and gave a creditable performance, and Andrei Vorobyov, Governor of Moscow Region, joined in the reds’ team talk during a timeout toward the end. Two promising young netminders from the Vityaz school were given 5-minute spells in goal, which must have been like a dream come true for the boys and their proud families. There was also a light-hearted military display, organized by KHL President Alexander Medvedev and set to music by producer Victor Drobysh, and a fitting finale to the game – a dramatic, last-gasp leveler from Evgeny Malkin. 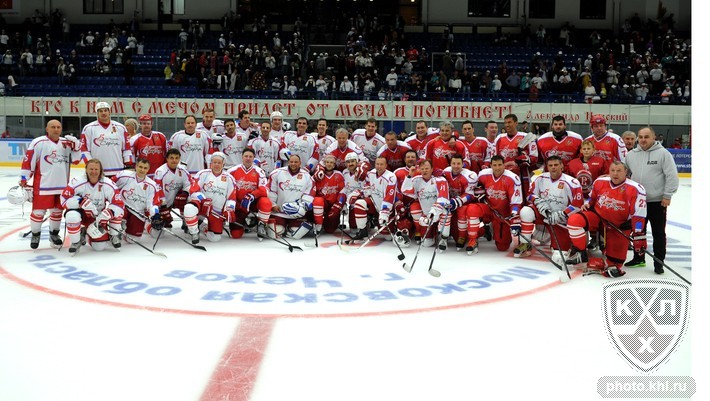 The most important result, of course, was not the 17-17 on the scoreboard, but the 16m rubles (approx, $432,000) raised by the event, to aid seriously ill children across the region. Nothing better illustrates all that is good about the game of hockey – not just entertainment for the public, but a source of hope, inspiration, and real-life help to those less fortunate than we are.