Two teams in the KHL have contested all six seasons to date without reaching a single play-off. Vityaz, now based in Podolsk, Moscow Region, and Metallurg Novokuznetsk are out to snap that streak in season seven. But with the league getting more competitive every year, can either of these underdogs finally scratch that seven-year itch.

According to the league table, last season was a case of same old story for Vityaz. The team moved from Chekhov to a larger arena in Podolsk but still found itself stranded at the foot of the Western Conference, 26 points adrift of the play-off places.

But closer inspection suggests that a young roster did make some progress – up until January Vityaz was in contention for a top-eight finish, only for the wheels to come off spectacularly on the closing straight. 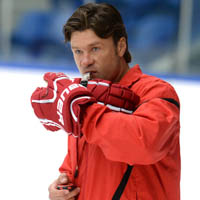 Back to the drawing board, then. Oleg Orekhovsky (right) comes in to become the youngest head coach in the KHL, and brings big ambitions to the club. A play-off place, of course, and also supplying players to the Russian national team. One day, on a personal level, the 36-year-old dreams of stepping behind the bench for the Red Machine himself, but for now he’s hoping to see some Vityaz players called into Oleg Znarok’s squad.

One player in international contention is defenseman Denis Grebeshkov, a former World Champion and Vancouver Olympian whose career has meandered somewhat in recent seasons. His arrival in Podolsk reunites him with Maxim Afinogenov, evoking memories of the pair’s much-trumpeted arrival at SKA in 2010. Back then the duo’s return from North America was seen as a coup for the KHL, while the prospect of them playing for a club like Vityaz was remote.

Grebeshkov himself admits that when his friends heard he was heading to Podolsk they asked him if he was taking up boxing, such is the club’s goon-like reputation in the game. But after a difficult time in recent years, including an unsuccessful return to Edmonton Oilers last season, the lure of big game time and a spot on the first line meant it was too good a chance to miss, especially with Znarok’s management team holding the door open for an international recall for any player whose form justifies selection.

Orekhovsky also identified Vyacheslav Solodukhin and Anton Korolyov as players who might be on the cusp of a break-out season. The 26-year-old forwards have grown in stature in recent seasons, and if they build on that it could make the difference between grabbing a play-off spot and facing another season of frustration.

In the Eastern Conference, Metallurg Novokuznetsk’s story has been one of financial hardship. While many clubs wrestle with small budgets, Kuznya’s plight has often prompted speculation that this Siberian outpost will be unable to continue. The consequences on the ice are predictable – a high turnover of players, with stars sold on to keep the organization afloat, and finishing positions near the foot of the table. Last season only Amur had a worse record in the East. 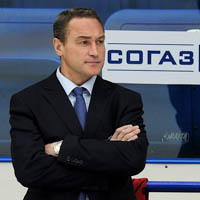 Hope comes in the form of youngsters: 19-year-old goalie Ilya Sorokin ousted Finland’s Niko Hovinen from the crease and did enough to earn a draft call-up from the New York Islanders. But too often, bright talents are whisked away to bigger clubs, frustrating head coach German Titov’s (left) rebuilding efforts. This summer saw Damir Zhafyarov lured to CSKA, while top scorer Evgeny Lapenkov moves to Avtomobilist. Defensive prospect Zakhar Arzamastsev also moved on, for Severstal, meaning another busy summer to assemble a roster for the new campaign.

Again it seems that youth will be crucial: young forward Tomas Rachunek arrives from Lev and an assortment of hopefuls have been called up from the MHL and VHL to stake their claims for top-level careers. But pre-season results have not been encouraging so far, and it’s difficult to see Kuznya break its play-off duck this time around.