All was not lost. Glinka Memorial Cup, Day 4 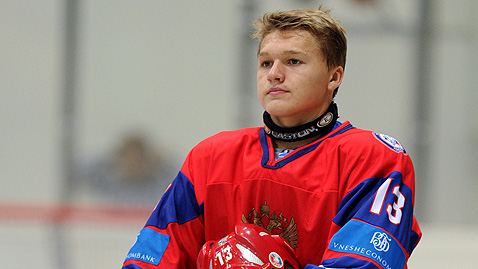 Russia’s juniors salvaged some pride as they bade farewell to the Ivan Hlinka U-18 Memorial Tournament, beating the Slovaks 5-2 to secure seventh place in the final standings. Ivan Yemets, Artyom Ivanyuzhenkov and Mikhail Byakin grabbed a goal each and Kirill Kaprizov (pictured, left) scored a double, and as befits the number one pick in this year’s KHL Junior Draft, the Novokuznetsk youngster finished the tournament as Russia’s top scorer with five goals. Head coach Yury Rumyantsev declined to offer a quick comment straight after the game, saying it would be better to make a long and thorough evaluation of all that had happened.

Meanwhile, in Breclav, Finland and Switzerland contested fifth place, although this was yet another game which bore little resemblance to a contest. The Finns were 3-0 ahead after only five minutes, and eventually inflicted a crushing 9-3 victory. Sebastian Aho, selected by Severstal in May’s KHL Draft, recorded a hat-trick to join Kaprizov on five goals for the tournament. 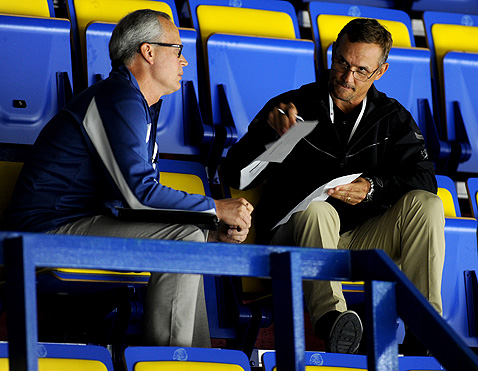 Then it was time for the important and decisive encounters - above all, the eagerly anticipated semi-final between Canada and the United States. Among those here to witness this clash in Piestany was Steve Yzerman (on right of picture), legendary former Detroit Red Wings captain, current Tampa Bay Lightning general manager and, as executive director, one of the team which guided Canada to Olympic glory in Vancouver and Sochi.

This game fully lived up to all expectations: as the Canadians began at maximum speed and kept their feet down on the throttle right until the very end.

“This is why I love this tournament and this age group,” said the delighted double Olympic champion and talent scout, Vladimir Lutchenko. “The games are always played with the same spirit; every period seems to fly by in five minutes, with a speed and a passion that you simply don’t get with the seniors. Nor will you see these youngsters lingering with the puck behind their own net, waiting an age while they decide what to do. Soccer coach Eduard Malofeyev, trying to produce the game in its purest form with Dinamo Minsk, coined the phrase, “whole-hearted football,” and this tournament more than any other gives us genuine, whole-hearted hockey.”

This North American derby served up a cocktail of earnest effort, high emotion, powerful hits and an abundance of goals. The Canadians have stood head and shoulders above the rest throughout this tournament, winning all three group games by a 5-1 score and without ever moving into top gear. To the Americans’ credit, they forced their neighbors from the Great White North to battle every second right from the opening face-off. 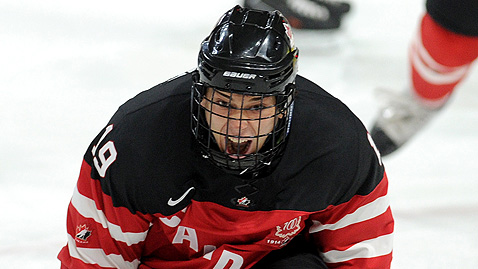 A mere 50 seconds into the game, Dylan Strom (left) opened the scoring, and even though a wonderful solo goal from the stand-out star of Team USA, Thomas Novak, soon restored parity, the Canadians kept up their relentless and ruthless pressure and by the halfway mark they had already racked up a comfortable 5-2 lead. This effectively put the result beyond doubt, but American heads refused to drop and they valiantly fought on to the very end, with the scoreboard heralding an 11-5 triumph for Canada. The current stats make interesting reading: the United States team now boasts the tournament’s top goal scorer, Brock Boeser (6 goals), and top point scorer, Thomas Novak (4+6), while the Canadians have scored more overall, but their goals and assists are more evenly distributed among their finely balanced offense.

The other semi-final was a much closer affair, with the Czechs earning a hard-fought 4-3 victory over the Swedes, thus progressing a step further than in the previous year when they finished third. Judging by what we have seen over the past five days, second place may well be the best the hosts can hope for, but of course, nothing in this sport is certain. If we cast our minds back a little further, we should remember there was an exhibition game played in Breclav between the two teams who will contest the final. This was part of a pleasant tradition of giving the fans an opportunity of seeing both North American teams, so Canadians went on to Slovakia for the tournament proper while the Americans played an exhibition game vs. Slovakia in Piestany before crossing the border into the Czech lands for their games in the group stage.

The Canadians began that game in sluggish form, and the Czechs were ahead in the scoring for much of the match before the Canadians’ late rally gave them a 7-5 win. So there may be similar twists and turn on Saturday when they meet again here in Breclav. Earlier in the day, the United States and Sweden will play for third place in Piestany.