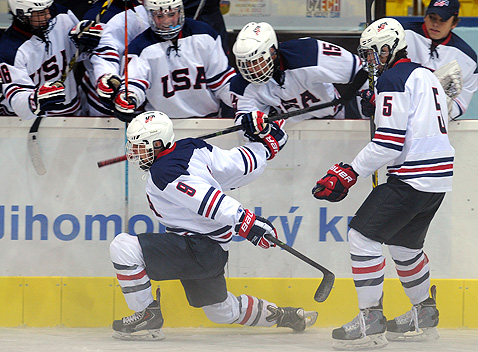 As the Ivan Hlinka Memorial Cup went into the third and final day of the group stage on Wednesday, the situation in Group A and B had followed near-identical narratives: in both cases, first place was already sealed (by the Czech Republic and Canada, respectively) and fourth spot also confirmed (Russia and Slovakia), leaving the second and third-placed teams to face each other for the vacant spot in the semis. So these two games formed a de facto knockout stage for the competing teams, USA vs. Finland in Group A and Sweden vs. Switzerland in B.

The latter turned out to be another mismatch, with the Swiss rolled over by the marauding Scandinavians – a 7-2 win for Sweden and the fourth one-sided contest in five Group A games, underlining the vast gulf in class between the four teams.

In Group B the USA also settled matters with a five-goal margin, recording a 9-4 victory, but the final score does not do justice to the fierce resistance offered by the Finns. In contrast to the cakewalk in Group A, the plot of this encounter closely followed that of the Americans’ previous outing against Russia on Tuesday: once again, they had a shaky start and twice fell behind before fighting back and applying overwhelming pressure late in the game. The result of this affair was still in doubt with six minutes remaining, until a four-goal avalanche settled matters and sent Team USA into the semis. 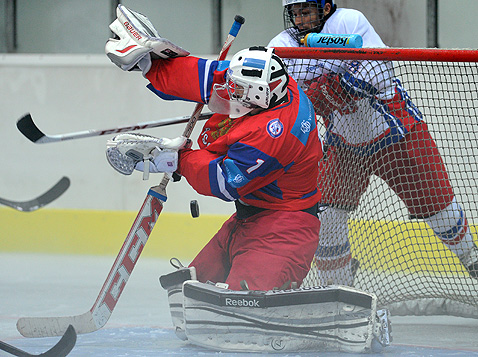 The biggest hero of the USA juniors, and now the tournament’s top scorer, is Thomas Novak, who after two games was the only one of the Stars and Stripes team to draw individual praise from Vladimir Lutchenko: "This guy can do everything," said the two-time Olympic champion, and Novak confirmed this verdict with some aplomb, racking up four points (2 +2) during the game. Yet again, a young American distinguished himself with a hat-trick, but this time it was Troy Terry, who had failed to notch a single point in the previous games. And Dennis Yan, whom we discussed at length in yesterday’s report, topped up his balance with a goal.

So now we know what awaits us in the semi-finals: we can look forward to a North American derby in Piestany and see how the Swedes will cope against the Czech hosts in Breclav. The other two games on Wednesday could not influence the group standings, but the Canadians nonetheless issued an ominous warning to the other three contenders with another 5-1 win, this time over Slovakia, finishing the group stage with an impressive goal differential of 15-3.

At the other end of the scale, the holder of the worst statistic in this regard is, alas, the Russian team. Having been dealt an 11-2 hammering by the Czechs, the for-and-against columns now display a horrific 8 against 23, and Yury Rumyantsev’s boys now head to Piestany to try to salvage some prestige in the play-off for seventh place. Their opponents will be the Slovaks, who shipped 14 goals in their three defeats and only hit a pitiful 3 in reply. One of these teams will regain a modicum of pride on Friday evening, but it will be scant consolation.

Games to be played on Friday, August 15:
Play-off for 7th place: Slovakia vs. Russia
Play-off for 5th place: Finland vs. Switzerland
Semi-finals: Czech Republic vs. Sweden; Canada vs. USA

Oleg Vinokurov and Yuri Kuzmin (photo), in Breclav and Piestany