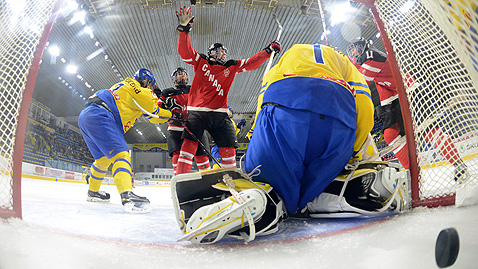 The second day of the Ivan Hlinka Memorial Cup got underway with an appetizing clash in Piestany between two of the tournament’s strong favorites, Canada and Sweden, both brimming with confidence after convincing wins the day before.

One side’s winning momentum had to falter, of course, and it was the Swedes who emerged crestfallen, as the Canadians, proudly sporting special jerseys to mark Hockey Canada’s centenary, recorded their second successive 5-1 triumph. But before any bilingual Maple Leafs fans say, “It’s déjà vu all over again," they should note that their youngsters had to overcome far tougher resistance than they faced on Monday, when the team secured victory fairly early in the game. In Tuesday’s encounter, the opening goal did not arrive until the 27th minute, and the North Americans went into the final period with only a slender 2-1 lead before unleashing an offensive blitz which yielded 3 goals from 24 shots. In the other Group B game, the Swiss bounced back from their loss against Canada by recording a 3-1 win over the Slovaks.

Having spent the opening day in Breclav at the Group A games, the double Olympic champion and eight-time world champion Vladimir Lutchenko had travelled to Piestany to see how the other half were performing. This is the 11th edition of this tournament to be played under his watchful gaze, and he says it would be wrong to assume that the wealth of talent on display has improved from year to year. 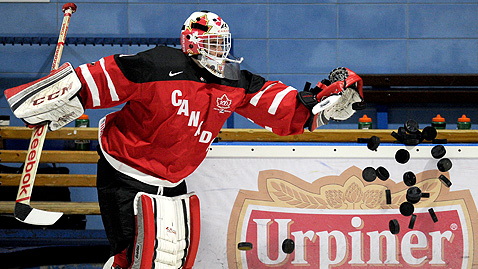 “For me, the most memorable was the first one I visited, in season 2003-04, when I saw Evgeny Malkin and many other great youngsters who went on to become real stars. Since then there have been other outstanding tournaments, but overall I would have to say that today’s players are not as talented as in previous years. The Canadians, of course, stand out from the crowd; they have the best individual skills and team play, and they’ve had the finest coaching. The result is powerful hockey, with great teamwork and strength. I regard the Swedes as the second strongest, but they are not as impressive as they were last year when they had William Nylander, picked by Toronto as 8th overall in this year’s NHL Entry Draft, spearheading the offense. The Swedish defense is sound and disciplined, but there’s a lack of creativity and ingenuity in offense. I do not find the Americans impressive, in general, but this is understandable as their most talented juniors are not here. This team has virtually no entertaining performers, but they can produce competent, training-manual hockey and they will fight until the very end.”

These were the very qualities which the Americans displayed in the game against the Russians. It was a match-up between Monday’s two losers, so one of the pair was destined to suffer a second defeat and wave goodbye to any realistic hopes of reaching the semi-finals. The outlook seemed bright for the Russians for much of the game, as they enjoyed a lead of 1-0, then 3-1, and then 4-3, but the Americans had restored parity by the end of the second period and hit Russia with three unanswered goals in the third, thus sealing a 7-4 win. 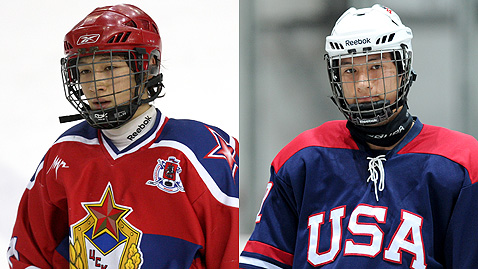 Kirill Kaprizov and Artyom Ivanyuzhenkov each scored a brace for Russia, while Brock Boeser hit a hat-trick and Dennis Yan collected four points (2 +2) for the USA. Yan is a Portland-born lad of Russian stock who played for CSKA as a child, and his presence and a number of other appearances and absences made this game a poignant reminder for anyone who saw the 2010-11 Moscow Championship.

Among the ten top scorers of that tournament, we find the names of five Army Boys, two of whom -Nikita Korostelev and Ivan Kashtanov – were not selected for this U-18 team as they have crossed the Atlantic, and Yury Rumyantsev has chosen to rely on Russia-based talent. Nor is there a place for Vladimir Studennikov, but Pavel Karnaukhov and Dennis Yan are both here, although the childhood team-mates are now opponents. Add the presence in the Russian ranks of Alexander Zhebelev and Mikhail Byakin, two more forwards who featured in those top ten scorers, and we can see why Yan seemed to be fighting a familiar battle on the ice. In the treasure trove that is our photo archive, we found a picture of a 14-year-old Yan proudly sporting CSKA colors, to place alongside one of Yan of the present day.

With a five-point haul from his first two games, Dennis Yan leads the list of tournament scorers, while another native of the former USSR is currently the stand-out goalie: Zachary Sawchenko of Canada, pictured above, has a GAA of 1.0.

And so Team USA won and kept its semi-finals hopes alive, while the Russians’ defeat left them grasping the straw of a mathematical possibility of qualification via an unlikely sequence of results, but this faint hope was extinguished in the final clash of the day, an open, exciting encounter in which the Czech Republic defeated Finland 4-3 to secure their place at the top of Group A and a berth in the semi-finals.

With one game each remaining in the group stage, the standings are as follows:
Group A: Czech Republic - 6 points, Finland and USA - 3, Russia - 0;
Group B. Canada - 6, Sweden and Switzerland - 3, Slovakia - 0.

Thus, the identities of two semi-finalists are already known, and the remaining two places will be taken by the winners of the Finland vs. USA and Sweden vs. Switzerland games on Wednesday.