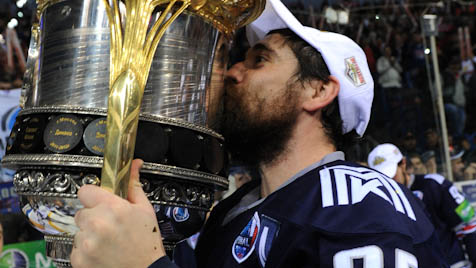 The League’s most coveted piece of silverware continues its journey across the nation as the champions of Metallurg Magnitogorsk bring the trophy back to their home towns and cities.

Last weekend the village of Dyum-Dyum, in the Republic of Tatarstan’s Yelabuzhsky District, welcomed the Gagarin Cup, brought here by the local hero and three-time Gagarin Cup champion Danis Zaripov. The Russian international left-winger was born in Chelyabinsk, but Dyum-Dyum is his parents’ birthplace and is where Danis spent his childhood, so it is no surprise that everyone in the village turned out to greet him.

Also present was goaltender Emil Garipov, his former Ak Bars teammate and fellow Tatarstan native. The event was success – Zaripov somehow managed to comply with the many autograph requests and everyone in Dyum-Dyum got to hold the famous trophy. The versatile sportsman ended the day by taking part in a football match with local children.