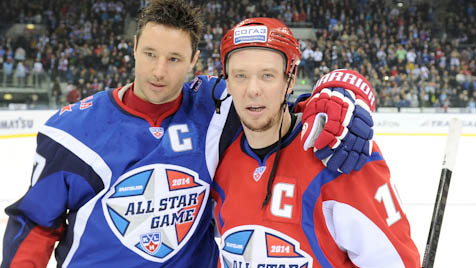 The evening is also notable for a giant fish. Yegor Milovzorov, of Neftekhimik, dons the unlikely headgear for his attempt in the penalty shoot-out in the skills test. Not to be upstaged, Ak Bars goalie Konstantin Barulin offers a passable impression of the incredible hulk, ripping off his jersey to reveal a pumped-up inflatable torso before the final shot of the contest. Satan is unmoved, though, scoring on him anyway. Barulin’s figure-skating turn from the previous season is not repeated, but Nikolai Prokhorkin pulls off a moonwalk after anchoring the West’s success in the relay.

In league action Dynamo Moscow completes a 10-game winning run that puts it on course to top the regular season table. Somewhat surprisingly it was Ugra which snapped the streak with a shoot-out success after a 2-2 tie at Luzhniki. Dynamo also becomes the first team to confirm its play-off spot. 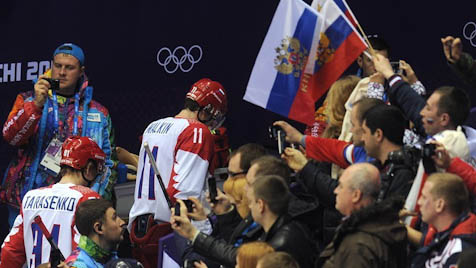 Hopes are high for Russia, with many believing a combination of home ice advantage and a powerful offense will be enough to bring gold for the first time since 1994. In the event though, only Finland’s KHL contingent – Sami Lepisto (Avtomobilist), Juuso Heitanen, Sakari Salminen, Jarkko Immonen (all Torpedo), Juri Lehtera (Sibir), Petri Kontiola (Traktor), Antti Pihlstrom (Salavat Yulaev) and Leo Komarov (Dynamo) – return with medals. The Finns take bronze, Canada repeats its Vancouver triumph after blanking Sweden in the final.

In the KHL Lokomotiv brings in Dave King as head coach for the climax of the season. King begins with four straight victories at the end of the regular season to secure a play-off spot, eliminating Atlant in what the coach later describes as a mini play-off. 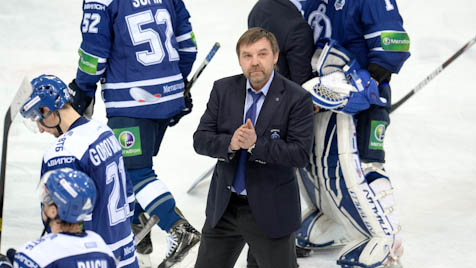 March
The Eastern Conference has a dramatic conclusion with three teams chasing down the last play-off spot. Avangard and Traktor, runners-up in 2012 and 2013, surprisingly lose out to newcomer Admiral, bringing play-off hockey to Vladivostok at the first time of asking.

Admiral’s voyage goes little further, though: a 1-4 reverse against Metallurg ends the play-off push in the first round as the Mozykain-Kovar-Zaripov line continues to do its damage.

The big shock, though, is in the West. Defending champion Dynamo Moscow was a big favorite against Lokomotiv, especially after winning its first two games. But Dave King’s young roster turns it around and wins the series in seven. Ex-Dynamo stars Ilya Gorokhov and Sergei Konkov help to sink their former club as Loko enjoys crushing victories in games six and seven to steam into the next round.

There’s also a surprise in the East, where Sibir casts a shadow on Zinetula Bilyaletdinov’s return to Ak Bars. The new GM in Kazan watches on as his team is dumped out at the first hurdle. Barys fares better, overcoming Avtomobilist to win a play-off series for the first time.

The shocks continue in round two as Lokomotiv takes down SKA in six games, while the match-up between Lev and Donbass sets a new record for the longest game in KHL history. Donbass finally wins it 4-3 in overtime when Andrei Konev scores on 126:14, but the series goes to the Czechs. The series also features three games played on neutral ice in Bratislava, due to a combination of political uncertainty in Donetsk and a double-booking in Prague.

The end of the month brings confirmation that Oleg Znarok will replace Bilyaletdinov in charge of Russia’s national team. Znarok will remain as a consultant coach for Dynamo Moscow, where Harijs Vitolins steps up from his assistant role. 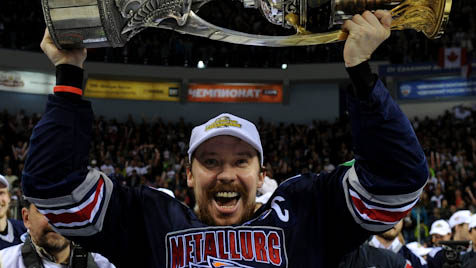 April
The Lokomotiv fairy tale finally hits the buffers against Lev. Dave King’s youthful outsiders put up a brave fight but the energy expended in overcoming Dynamo and SKA is too much for them. Lev produces a textbook display of defensive hockey, conceding just once in the first three games of the series to secure a 4-1 victory overall.

Metallurg advances by the same scoreline after producing too much firepower for Salavat Yulaev. The Ufa team does inflict the first shut-out of the play-offs on Mozyakin & Co but cannot prevail in the series. With Lev becoming the first non-Russian team in the KHL final, Magnitka is crowned champion of Russia ahead of the Gagarin Cup showdown, making Mike Keenan the first North American to conquer Russian hockey.

The grand final itself is a classic. It takes seven games to separate the two teams, and when Lev’s Ondrej Nemec suggested that in the end it was good fortune as much as ability that saw Metallurg squeak a 4-3 verdict it was hard to disagree with him.

Any thoughts that Magnitka would plow through the series with little trouble were quashed in game one: Lev won 3-0 in Magnitogorsk to stun the home fans and serve notice that this was to be a full-on battle. Metallurg replied with a 4-1 win, and the teams traded further wins in Prague before KHL record-breaking attendances.

Sergei Mozyakin stretches his scoring feats for the season to new heights: his final tally of 106 points outstrips any previous marker in Soviet or Russian hockey. But the two goals he gets in Game 5, to give his team a 2-1 overtime win, might well rank as the most important of his prolific career.

Lev refuses to give up, though, and battles to a 5-4 overtime win in Game 6; Mikko Maenpaa ties it up with barely two minutes left to deny Magnitka the trophy; Nathan Oystrick finishes the job in the extras to take us to a winner-takes-all showdown.

Here, finally, Metallurg secures its first Gagarin Cup. The 7-4 win fittingly sees both Mozyakin and Lev’s Justin Azevedo on the scoresheet; Azevedo becomes the first man to score in all seven games of a final series but still doesn’t get his hands on the trophy. Danis Zaripov, with 1+3, orchestrates a memorable triumph as Iron Mike Keenan brings glory to Russia’s Steel City.

Keenan signs off with an impromptu karaoke session in the locker – Russian shanson and the timeless ‘My Way’ are on the playlist – and announces he’ll be back next year to try to do it all again. Three new clubs will be among the competitors: Jokerit Helsinki moves from the Finnish Liiga, Lada Togliatti returns to the KHL and a new, currently nameless team will move into Olympic Sochi in time for the big face-off in September.