After having lifted Gagarin Cup, the KHL ultimate trophy, Metallurg Magnitogorsk head coach Mike Keenan reflects on the glorious season in an exclusive interview to khl.ru.

“Does each and every success taste the same?”
“No, not the same. They are all similar in the sense that it’s a celebration, but every group is different, and we had a great group of players to work with. It took a lot of energy on their behalf to help us mold and develop the team over the season, and then learn the lessons of winning over the course of the season and in the playoffs. So they’re a really great and receptive group to work with. We had many young players who hadn’t won anything. Only had three players in the team – Zaripov, Yunkov and Kazionov – had won the Gagarin Cup before, and the rest of them had to learn. Like I said, a good group to work with.”
“How would you rate this season against all the others in your long career?”
“It was one of the better seasons I’ve had as a coach. The coaching staff – Ilya [Vorobyov], Mike [Pelino] and Thomas [Bjuhr] - made it worthwhile. They were completely committed to working as a coaching team, and it ranks up there as one of the better years. I’ve had many, many great years, in the NHL and other locations, with championship teams at many different levels, but this was a unique experience, obviously, because we had to rely on Ilya. He was our lifeline for the translation and communication. That was a big gap that we had to bridge, and Ilya made that happen for us.”
“You have a wealth of experience in training all kinds: young players, old players, star players, so what kind of experience was most useful for you here?”
“I think all your experiences accumulate and give you the knowledge you need to deal with players, from superstars like Mozyakin and Zaripov, to Antipin and the other kids on the team that were learning their trade and their skills. So it was a mixed bag from the top, experienced people to some very young players that needed nurturing, and needed to be developed and pushed and needed to learn. And they did learn.”
“Can this team be compared to any of your previous teams?”
“The comparison is with the teams that won. They all have a common thread. The common denominator is that they finally learned the lesson of working together and winning together, that it’s a team sport, the ultimate team sport, that the sum of the players is greater than the individual parts, the synergism, that it’s really a vast, limitless aspect of human development, that you can get more out of individuals than they thought they could give. It’s exciting and fun, and this team ranks amongst the groups that I had success with; it is the same understanding that made them a good team.” 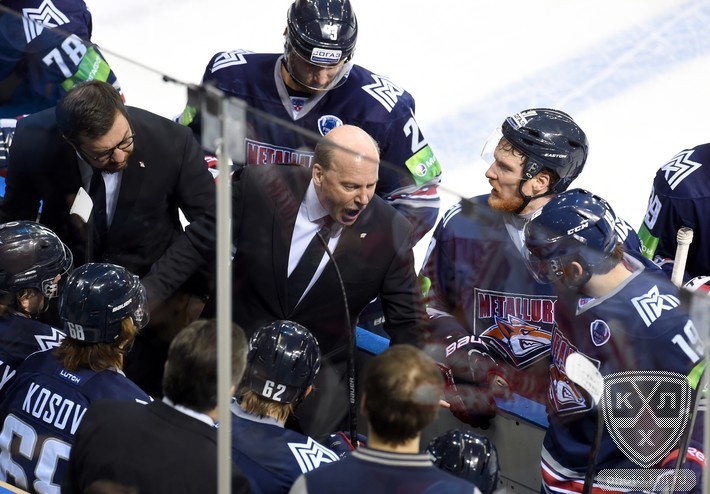 “As we discussed before the season when you had just arrived, you have had various kinds of success in your career: instant success, when you just arrived and won, and also gradual, long-term success. You must know better than most: what must you do now to keep them progressing?”
“We have to have the players invested again, and I’m not going to ask them to do that now, while they’re celebrating the success that they had. It takes a lot of commitment. It’s very, very hard to win at any level in any league. Now they need rest and they need to recover, and then we’ll set some standards when we come back for training camp and try to be a better team than we were this year.”
“Will it necessarily involve some roster changes?”
“That will be up to Gennady [Velichkin, club vice-president] and Mr Rashnikov [club president], because they are in charge of the roster and the budget and they decide what they want to do in terms of playing personnel. But most of this group will be back.”
“Is it possible to progress further with the same group?”
“That’s what we hope, and that’s what we are going to try to accomplish; it’s tough to repeat, but as I said, we have a young group and they still have a lot to learn about winning, so there’s room for improvement of their individual abilities to bring them together as a team.”

“Can you say a few words about your personal experience of new country, new environment, new league…?”
“When Michael and I came here, we said to each other: we’re coming here to win, and we’re coming here to immerse ourselves in the culture of the Russian people and understand how they think, how the athlete thinks, how their environment influences their behaviour, and what the expectations are, so I think that was a really important part of our existence here - that we made sure we were part of the Russian culture here; we embraced it and tried to take full advantage of our own skill sets to learn more about the people, in what is for us a foreign land; we’re the imports here. We’re not in Moscow or St Pete’s – we’re in Russia, heartland Russia, working-class Russia, and so that was definitely something we wanted to really feel.”
“Was anything more difficult here?”
“No, not really difficult. It took work on our behalf to immerse ourselves and make sure that we understood what we were doing here and understood the people. That takes dedication. That takes a commitment to an organization and to a group of players, and we committed ourselves and we sacrificed our time to a great extent, not having family here for most of the winter, but we understood that when we took this responsibility on so we wanted to give them our best shot as coaches. Ilya, in particular, made that transition much easier; it could have been more difficult, but because of his experience with a coach - his father [Pyotr Vorobyov], a legendary coach - he could capture the imagination and the essence of what we were trying to communicate on every level: emotional or intellectual, and he was the lifeline for the team. I’m sure the team appreciates what he did for us imports - Michael, Thomas and me - and what he did for the players. 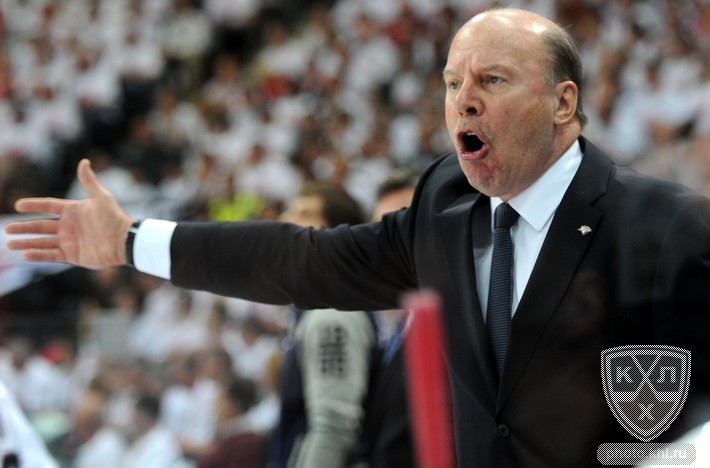 “Are you still the same Iron Mike that you were a couple of decades ago?”
“In principle, I am, but maybe not in methodology. The methodology, I believe, has certainly softened, but I think the principles that I try to work with for coaching remain the same.”

“The general principles of managing players?”
“Yes, your expectations of them, the goals you set for them, how you communicate that to them, and how you get them to understand the kind of commitment it takes to be a winning team. I have always followed those principles of winning, but as I said, the methodology has softened.”
“As well as players, you must also deal with referees, and these relations are not always harmonious.”
“Yes, that’s part of the business we work in. Everyone understands the passion that’s involved in hockey, and they’re part of the game because they’re on the ice with the players. It’s just like any other league I’ve coached in: sometimes they get it more right than at other times, and sometimes they don’t. Sometimes you’re passionately invested in what’s happening on the ice. What drives me most is just a sense of fairness for the players, and there are times, if I don’t think it’s been delivered properly, that I want to make sure that’s clear.”
“How about the pressure of your work here in the Russian league?”
“I think I’ve had so much experience, and so has Michael, and dealing with Ilya is a great part of our coaching team, that I didn’t feel that much pressure here. We came with a mission in mind, and I didn’t really feel any extraordinary amount of pressure. I just tried to deliver our best coaching skills every day, and watch for improvement, watch for the team to grow. I didn’t focus on the essence or the pressures of winning; I focussed more on the essence of teaching and coaching, and for that reason, it didn’t feel like we were under a great deal of pressure. Sure, there’s pressure in our job - that’s coaching, but it wasn’t extraordinary.”

“So your general plan for next season is to do the same as you’ve done throughout this season?”
“You have to make an adaptation to the players you coach as well. People always say, “What system are you using?” And I just say, “Well, it depends on what players we’re coaching.” Whether you’ve got a bunch of defensive-minded or offensive-minded players, and you usually end up with both, you have to adapt your system to their skill set: what they are realistically capable of doing. You can’t impart a system on a group of players that could never grasp it; you have to give them something that they can believe in and understand; something they can do and execute on the ice, so I’m sure they’ll be some adaptations next year when we have some different players.” 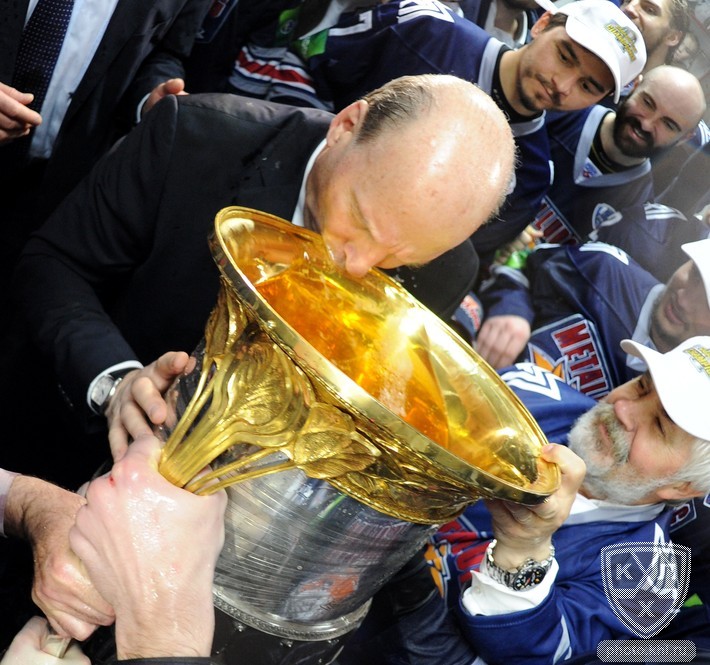