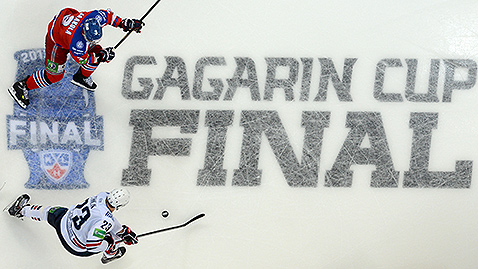 Seven points for Metallurg’s first line – four of them assists for the irrepressible Sergei Moyzakin – lifted the Eastern Conference champion to a series-squaring success in game four in Prague. Mozyakin, whose personal play-off tally now stands at 9+19=28 had a hand in all the key moments while Danis Zaripov and defenseman Viktor Antipin scored two apiece to lead Magnitka to victory.

Zaripov’s goal early in the third period finally turned this roller-coaster of a game in Metallurg’s favor – with a rare defensive lapse from Lev contributing to the Czech team’s downfall. Mozyakin, as usual, was heavily involved, dancing through the home defense with alarming ease before poor positioning from goalie Petri Vehanen and defenseman Mikko Maenpaa presented Zaripov with an empty net to make it 4-3.

It soon got worse for the home team, with Magnitka earning a 4v3 power play and converting the opportunity within 30 seconds. The Mozyakin-Zaripov pairing did the damage again; a diagonal from the former picked out Zaripov at the back post and Vehanen’s desperate lunge across the crease came too late to stop his shot finding the net.

Although there were still 15 minutes to play, the first two-goal advantage of the evening always looked likely to be decisive. Lev dominated the closing stages – Zaripov’s two goals represented two-thirds of his team’s shots on target in the final stanza – and earned three power plays. But as the clock ran down the pressure intensified and errors crept in to the home team’s passing. Apart from a Martin Thornberg shot that rebounded to safety off the inside of the post Metallurg held its advantage fairly comfortably.

Frustrations boiled over in the final seconds resulting in a fight between the home team’s Ryan O’Byrne and the visiting Oskar Osala after the hooter.

Throughout the early stages the teams traded goals and opportunities, with neither side able to build a decisive advantage. Magnitka got the opener early on, with Yaroslav Khabarov rifling home a one-timer as Denis Platonov screened Vehanen.

But for the first time in this series, the team scoring first found itself behind. David Ullstrom tied it up after a defensive mistake before Justin Azevedo kept his streak going to make it 2-1. The Canadian has scored in every game of this series, and his fifth marker in four games came with a wrist shot across the face of Vasily Koshechkin.

That lead lasted less than one minute, though, before Antipin, pushing up from his usual place on the blue line, got on the end of a Zaripov pass to force the puck home from close range and send the teams into the first intermission at 2-2.

Lev took the lead once more on 27 minutes with a characteristic power play goal. As Jiri Novotny screened Koshechkin, Ondrej Nemec let fly from the blue line and beat the unsighted goalie for pace. But Antipin squeezed the puck between Vehanen’s skate and the post to tie it up yet again. Mozyakin supplied the assist.

Tonight’s game set another KHL attendance record, breaking the 17,000 barrier for the first time. 17,073 came to Prague’s O2 Arena, a few hundred more than the 16,435 who saw Tuesday’s game. With the teams already sure to return for a potentially decisive game six on Monday, this record might also prove to be short-lived. Before that, though, Saturday sees the teams back in action in Magnitogorsk in front of a smaller, but no less fervent crowd.