A defensive lockdown lifted Lev to a 3-0 victory in game one of the Gagarin Cup final series against Metallurg Magnitogorsk. Goals from Martin Sevc, Petr Vrana and Justin Azevedo, plus 21 saves from Petri Vehanen, proved to be the winning formula for the Czech team.

That conclusively pooped Magnitka’s party: the home team, widely regarded as favorites before the series, had high hopes of powering through its first ever Gagarin Cup final game with a vocal home crowd behind it. But after a bright start, those plans swiftly went astray.

The whole tenor of the game was transformed in the 11th minute when home defenseman Viktor Antipin was ejected from the game for interference. Antipin landed a crunching check on Lev’s Vrana, who spent some time on the bench recovering from the impact, but while there was no question about the interference call there was some surprise that the officials regarded it as a 5+20 minute penalty.

Handed a big advantage, Lev responded strongly. Throughout that five-minute power play the Czech team kept the puck in Magnitka’s zone; Ondrej Nemec led the way with a volley of five shorts, all from long range, in the space of 45 seconds as the visitors looked to generate traffic in front of Vasily Koshechkin’s net and pressure the goalie into an error. The tactic ultimately paid off on 13:35 when Sevc powered home a slapshot from the blue line while Jiri Novotny did enough to distract Koshechkin in the slot. 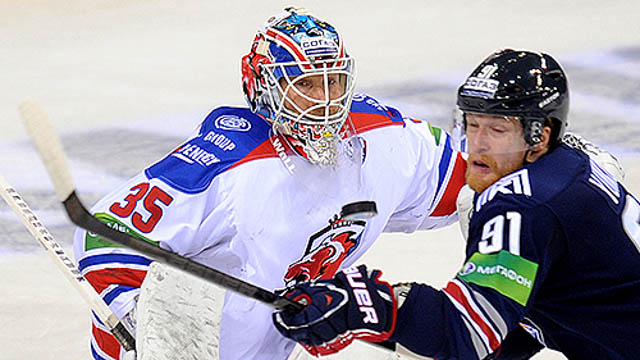 The home team was not without chances of its own, however, and the prolific Jan Kovar almost wiped out his compatriots’ advantage in the closing moments of the opening session. First he forced a point-blank save out of Vehanen after Sergei Mozyakin’s pass from behind the goal, then, on the power play, he rushed on the net and fired a backhander which was desperately hacked away from danger.

But Lev has gone far in this tournament thanks to a solid defense, and especially a reluctance to give up goals on the penalty kill. Throughout the game the visitors limited Magnitogorsk’s opportunities, and Vehanen was up to the shots that did get through to his goal. At the other end, meanwhile, a rare foray up the ice early in the second period enabled Vrana – now restored to full health – to double the advantage. He produced a beautiful finish, pausing in the slot for long enough for Koshechkin to commit himself before lifting the puck over the sprawling goalie.

Lev had never given up a two-goal advantage in this season’s play-off, and already understood that the key was now to restrict the opposition as much as possible. Up until Mikko Maenpaa’s penalty in the 14th minute of the middle session, Metallurg mustered a solitary shot on Vehanen’s goal; in the third Lev focussed on defense to the extent that the team did not manage a single shot at Koshechkin, grabbing a third marker only after the goalie had been withdrawn. Azevedo claimed that empty-netter, wrapping up a convincing opening victory for the pre-final outsider.