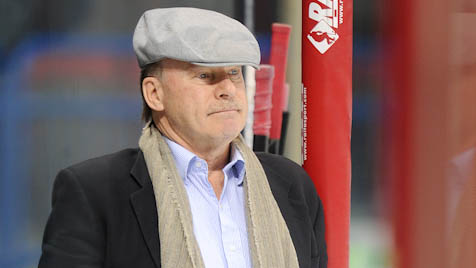 Three forwards have dominated this season, both in regulation and play-off hockey. Metallurg’s front line of Sergei Mozyakin, Jan Kovar and Danis Zaripov has found the net with thrilling regularity, dominating at equal strength and tormenting opponents on the power play. And now Mozyakin, one of the most consistent goalscorers of recent years, might finally win the club title his individual prowess has long deserved.

Indeed, Mozyakin has already secured the Russian championship, as well as a stack of personal scoring records. As soon as Lev confirmed that it would be the first non-Russian team to contest the Gagarin Cup final, Metallurg’s Eastern Conference final against Salavat Yulaev became a de facto Russian title decider. Magnitka’s success ensured that Mozyakin finally had a club award on his CV, having previously been a runner-up with Atlant in 2011.

Lev’s advance also means that Magnitogorsk will be flying the Russian flag in this competition at the end of a difficult season for many Russian hockey fans. The disappointment of the Olympics – with Mozyakin left at home while Russia struggled for goals – is still sharply felt and has prompted serious discussions about possible changes in the rules allowing foreign players and coaches to work with local teams. Seeing the Gagarin Cup head across the border would be another big blow, and defenseman Yaroslav Khabarov is aware that there may be more than just club loyalties on the line in the coming week.

“At Metallurg we always play for the city, for the steelworks, for our supporters and the logo on the jersey,” he said. “But yes, this time we’re also representing our country because our opponent is Czech. Maybe we’ll even get some support from other cities, such as [local rival] Chelyabinsk.”

However, KHL hockey is an international game, and Khabarov pointed out that there are foreigners in the Magnitka locker room as well. Kovar, Mozyakin’s young strike partner, comes from the Czech Republic, and then there is Canadian head coach Mike Keenan. Two decades after winning the Stanley Cup with the Rangers, ‘Iron Mike’ has made history by becoming the first North American coach to win the Russian championship – even though he was surprised to learn that his team was the champion during the press conference after the Eastern Conference final series against Salavat Yulaev.

Keenan’s success in his first KHL season does much to show what foreign talent can bring to Russian hockey; at the same time this battle-hardened NHL veteran is increasingly aware of the rising quality of this competition. “It’s very difficult to win in this league,” he said. “In particular now teams are becoming more difficult as every coach will agree. All the teams are continuing to be better. To win four rounds and win the Gagarin Cup is a formidable task.” 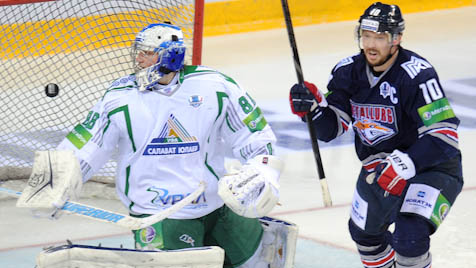 The road to the final:

How Magnitka can win it
With a front line that has produced 48 points in 14 post-season games, it seems pretty obvious that getting the puck to Sergei Moyzakin (7+12=19 points so far in the play-offs) would give any team a great chance of success. But that overlooks other important contributions: Vasily Koshechkin’s 94.4% save percentage tops the play-off rankings, and he pulled out two shut-outs in his last two games as Salavat Yulaev tried to smother the Metallurg offense. As for a Plan B going forward, that’s rarely been tested in these play-offs, particularly when eight of the team’s 12 game-winners have come from that first line. Even so, there have been big moments from Viktor Antipin and Yaroslav Khabarov, stepping up from the blue line for vital goals on the rare occasions that the main forwards have faltered.