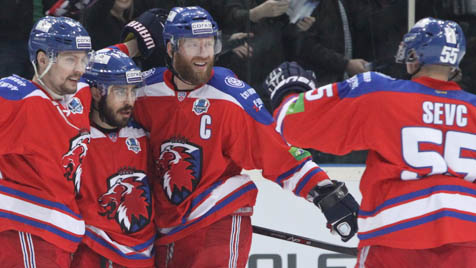 Throughout the season Lev has been flying under the radar. Despite a regular season run to third place in the Western Conference, the focus was always on SKA and Dynamo Moscow; in the play-offs Lokomotiv’s charge to the final captured the imagination of many neutral fans.

Yet Kari Jalonen’s team has performed with enviable consistency throughout the campaign. It’s not the biggest-budget roster in the competition, and it’s not a star-studded line-up, but a well-drilled defense – one which gave up just one goal in the first three games of the series against Loko – looks well capable of proving the old adage about winning championships true once again.

Jalonen is comfortable with the underdog tag, even though his team carries the expectations not just of a club or city, but an entire country. And he’s not overly worried about reputations either.

“I’ve not been following what they are saying in the Russian newspapers but I understand why they say Metallug is favourite and that’s OK with me,” Jalonen said. “We know that the big thing is what happens on the ice. It’s not about money, it’s about the heart and soul that we have. When you’re building a team, that’s what is important, not money. Rashid Khabibulin, our GM, has done a really good job and now we have a great opportunity to win the Gagarin Cup.”

Lev is only playing its second season in Prague, and many are surprised that the team has progressed so far, so fast.

But the roster is studded with title-winning experience in the KHL, in North America, in Scandinavia and at World Championships.

“On our roster there are a lot of guys who have won championships in different leagues,” added Jalonen. “That’s good experience for us. When you are in this situation, and the two best teams are playing, there’s no pressure. We have to go out and enjoy the occasion, give it everything on the ice. That’s the only thing we can do now.”

One man who has seen it all before is Jakub Klepis, a Gagarin Cup winner with Dynamo Moscow and Salavat Yulaev and a World Cup winner with the Czechs. Now he’s gunning for glory with his home town club.

Although Klepis had a stint in the NHL, he admits he never really came across the man behind the bench at Metallurg, Iron Mike Keenan, a Stanley Cup winner in 1994 and a veteran NHLer. But he has a clear idea of where the biggest threat from Magnitak might arise: “They say Keenan’s a hard coach, he’s very strict in practice and everything, but more importantly we know they have got the best line in the league with lots of points and a really good power play.” 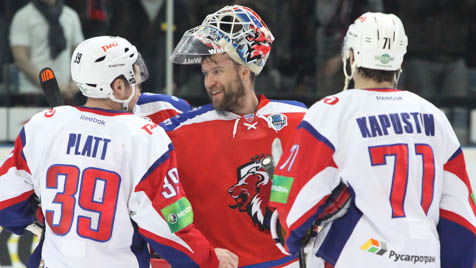 How Lev can win it
It doesn’t happen very often, but even during this play-off blitz teams have managed to squeeze the fearsome Mozyakin-Kovar-Zaripov trio out of the game. Salavat Yulaev limited that line to just five shots – four in the first period – during its 4-0 win in game three of the conference final, while Sibir applied a similar squeeze before going down 2-1 in overtime in game three of that second round series. But spiking Magnitka’s guns will take more big performances from Petri Vehanen and his defensemen, and will also rely on players like Jiri Novotny and Patrik Zackrisson maintaining their high goal-to-shot ratios in support of leading scorers Petr Vrana and Martin Thornberg. Lev’s style doesn’t generate a procession of chances, so the finishing has to be clinical when opportunities arrive.