Metallurg Magnitogorsk booked its place in the Gagarin Cup final – but a dazzling display from Salavat Yulaev goalie Andrei Vasilevsky made for an anxious evening for the home fans.

Yaroslav Khabarov finally broke the deadlock in the second minute of overtime, but before that Vasilevsky made 37 saves as the teams failed to find the net in regulation. 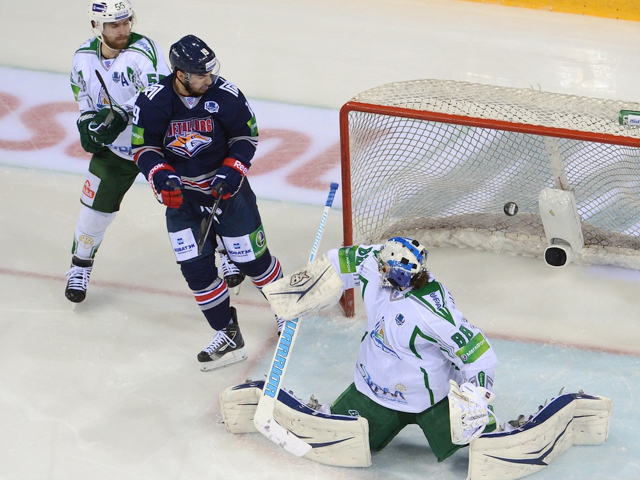 Knowing that victory would wrap up a series victory here in Game 5, Magnitka piled the pressure on, particularly in a dominant second session when at times it seemed as if Vasilevsky was producing a solo display of defiance while his defense drifted astray.

And that pressure finally paid off on 61:14. Francis Pare and Mikhail Yunkov orchestrated a breakaway after an interception in Magnitka’s end; Bogdan Potekhin saw his shot turned around the post but retrieved the puck from behind the net to set up Khabarov for a one-timer from long range to send Magnitogorsk to its first ever KHL grand final.

Earlier it had been a case of how long Salavat could hold out under a tide of Metallurg pressure.

The best chance of the first period came to Metallurg’s Tim Brent when he was sent clean through on Vasilevsky. But the young goalie got everything right, thrusting out a pad to halt his opponent’s rush and keep the scoresheet blank up to the first intermission.

The second stanza saw Magnitka go closer still in the second period. The home side stepped up the pressure, and Viktor Antipin seemed certain to score when the rebound for a Jan Kovar effort dropped for him in front of an almost unguarded net. Vasilevsky stretched out his glove to make a seemingly impossible save, and the video judge confirmed that the goalie had kept the puck from crossing the line.

That wasn’t Vasilevsky’s only big moment in the second session:  Potekhin and, inevitably, Sergei Mozyakin also put him through his paces as Magnitogorsk stepped up its offense and stretched Salavat’s defense to breaking point. But after 40 minutes there was still no way through.

The third period continued with Magnitka still having the edge, but still unable to find a way past Vasilevsky, while at the other end Vasily Koshechkin made 24 saves of his own to secure a second successive shut out and help his team to a second successive 1-0 verdict.

Victory sets up a grand final between Metallurg and Lev and gives Magnitka – the only Russian team left in the competition – a national championship title. The final action is scheduled to start in Magnitogorsk on April 18 and 20, before moving to Prague on April 22 and 24.