Lev will be the first non-Russian team to contest a Gagarin Cup final after completing a series victory over Lokomotiv with a tight 3-2 victory on Thursday.

Twice the Czech team opened up a two-goal lead on Lokomotiv, but the Yaroslavl men kept battling to the very end. In the end, though, Lev’s willingness to get players in the face of goalie Curtis Sanford ultimately made the difference: solid screening contributed to two goals on the night, and did enough to outstrip the individual heroics of Geoff Platt.

The 11th minute highlighted the difference: at one end Loko’s Ilya Gorokhov thumped in a slap shot that was clearly seen by Petri Vehanen all the way, and comfortably saved. Lev turned around possession and on its next attack got traffic on Sanford’s net, before Jakub Nakladal’s shot from the blue line was turned in by Michal Repik with the goalie struggling to see anything.

Lev’s second goal, five minutes later, also owed much to a screen on Sanford. Loko’s Yegor Yakovlev had threatened to snatch his second successive short-handed goal, but soon after it was Justin Azevedo who was celebrating as his shot from the top of the circle flew in as Jiri Novotny dominated the slot. 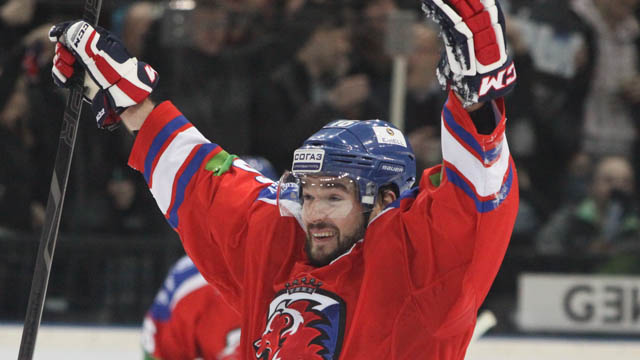 Platt pulled one back before the first intermission with a close-range one-timer, but another breakaway goal reinstated Lev’s cushion early in the second when Michal Birner (pictured) scored at the second attempt.

Loko’s Belarusian-American forward Platt then produced a contender for goal of the play-offs – and probably one of the greatest finishes seen in the KHL’s history. There seemed to be little danger as Sergei Plotnikov struggled to get the puck out of the corner but Platt flicked up his pass, juggled the puck then swatted the disc past Vehanen as it fell back towards the ice.

It was a goal that deserved more than merely reducing the deficit in the game, but it wasn’t enough to inspire Loko to tie the game as Vehanen stood firm in a nervous, scoreless third session to take Lev to its first Gagarin Cup final.

That’s a big achievement for the Prague club in only its second season. It’s also something of a surprise to many: a good regular season performance earned the Czechs third place in the Western Conference, few seriously imagined the team would beat the likes of Dynamo Moscow or SKA to the conference title.

However, once Lokomotiv delivered high-profile shock wins in the first two rounds, the path was clear for Lev to follow up on its wins over Medvescak and Donbass to book a place in the grand final.

For Loko, meanwhile, those fairytale heroics against the section’s big hitters proved impossible to sustain: the adrenaline rush that saw Dave King’s men endure through two rounds despite sneaking into the play-offs in eighth place could not take this young team further. Three defeats in the opening games – and just one goal scored – suggested that this underdog was finally reaching the end of its brave battle.

Game 4 brought hope of a recovery – and a fighting display in game five pushed Lev hard – but in the end the deficit in the series was too much to claw back and the Prague team ended Loko’s hopes. Lev now waits to discover its opponent from the Metallurg vs. Salavat Yulaev series that continues tomorrow with Magnitka one win away from the Final.