Metallurg is on the brink of reaching its first ever Gagarin Cup final – and confirming that a new name will appear on the trophy this season.

A tight 1-0 victory at Salavat Yulaev puts Mike Keenan’s team 3-1 up in the series and means that Friday’s game in Magnitogorsk could be the one that confirms Metallurg’s progress to the grand final.

After Wednesday’s 4-0 drubbing, Keenan had complained that his team looked short of energy and tonight his players certainly seemed better able to match Salavat blow-for-blow. An even opening session saw Magnitka come closest to scoring when Francis Pare rattled the piping late on, but the goalies were on top of their game. 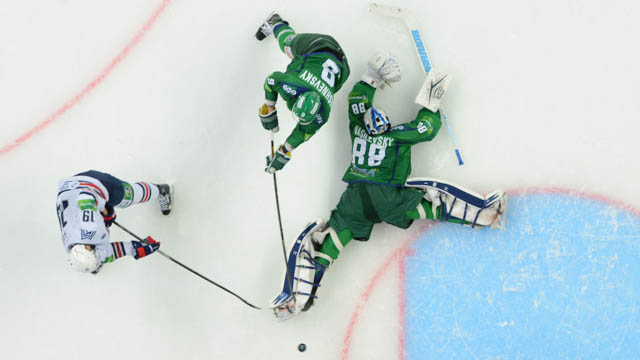 That pattern continued into the second session: Andrei Vasilevsky produced a double save to deny Oscar Osala and Dmitry Kazionov while the home team also kept the pressure on Vasily Koshechkin’s goal.

The only goal came in the 36th minute thanks to a neat combination on the Magnitogorsk power play. A flurry of passes saw Sergei Mozyakin and Jan Kovar set up Viktor Antipin for a one-timer from the slot to open the scoring – and ultimately put his team within touching distance of the final.

But a lack of goals did not mean a lack of action: Salavat, in particular, produced plenty of chances and forced Koshechkin into 39 saves for his shut out. Perhaps the best of these came late in the second as Antti Pihlstrom led a two-on-one breakaway and picked out Igor Mirnov. The forward did everything right, firing a one-timer just inside the post, only for Koshechkin to block with his arm and preserve his team’s lead. That save summed up Mirnov’s evening; the forward had nine shots on goal but could not find a way past an inspired opponent.

Salavat’s hopes of whipping up a storm in the closing moments were hampered by a penalty on Alexei Kaigorodov in the 59th minute. As he skated to the sidelines, the home team’s chances of forcing overtime went with him and Metallurg held on fairly comfortably to take a commanding lead back home ahead of Game 5.