Sergei Konkov picked the perfect moment to grab his first goal of this series – saving Lokomotiv from a series sweep against Lev with just six minutes left to play, and paving the way for Sergei Plotnikov’s overtime winner.

There were only 30 seconds left in the first period of overtime when Vladislav Kartayev fired a close range shot in Petri Vehanen’s pads and saw the puck spin out towards Plotnikov. The young forward, a key player for Loko on the night, took his chance and completed the Yaroslavl team’s recovery from the brink of defeat.

It all means that the action continues in Prague on Thursday, with Loko’s unlikely play-off dream still alive. The Yaroslavl team has already spiked the big guns of the West, and after being roundly written off before beating Dynamo and SKA will doubtless feel that retrieving a 0-3 series deficit here is all in a day’s work. Certainly, the way the home team battled back twice in regulation time here suggests that Dave King’s men still have plenty of belief.

It was belief that kept Lokomotiv battling away in the third, even after Emil Galimov’s 53rd-minute effort was disallowed. Galimov sent Martin Sevc crashing head first into the boards before recovering the puck and shooting home after the whistle had blown. A bout of fisticuffs ensued with Calle Ridderwall and Ilya Lyubushkin picking up double minors for roughing.

But while they were out of the game Konkov glided into the deep slot and unleashed a powerful shot past Vehanen to tie the game.

Galimov’s no-goal wasn’t the first time Lokomotiv was left bemoaning its fate; Lev’s opening goal was credited to Jiri Novotny, but owed a big debt to Lady Luck on its way into Curtis Sanford’s net. Ridderwall’s shot rebounded back out in front of goal and as Novotny followed up, Alexander Chernikov and Yury Petrov went tumbling over one another and unwittingly forced the puck over the line. 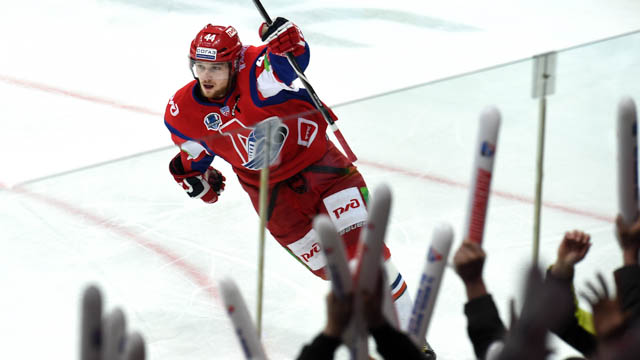 The home team soon tied it up with a short-handed goal from Yegor Yakovlev (pictured). Plotnikov did a superb job to force Lev out of the offensive zone and Yakovlev spearheaded a two-man rush before picking his moment to rip a wrist shot past Vehanen and make it 1-1.

That short-handed success arguably contributed to Lev’s second of the night, however. Another penalty, this time on Plotnikov, saw another audacious counter-attack. This time Petrov’s pass towards Chernikov went astray and Lev swept back down the ice for Natan Oystrick to reinstate the lead. Previously in the series Loko’s lack of goals would have made two goals more than enough to win it, but not tonight.