Not many teams have managed to blunt the fearsome cutting edge carried by Metallurg’s offense this season, but Salavat Yulaev managed it in style to reawaken this series.

Trailing 0-2 after the games in Magnitogorsk, Salavat knew that there was little margin for error if it was to remain in contention in this series. That meant finding a way to stop Sergei Mozyakin’s line, and especially Mozyakin himself after the KHL’s all-time record scorer had grabbed the decisive goal in the previous two encounters.

And rock-solid defense proved enough to pile up the pressure on Magnitka’s entire roster: after shading a tight first session thanks to Antti Pihlstrom’s goal, Salavat restricted Mozyakin to a single shot on goal, while neither Jan Kovar nor Danis Zaripov tested Andrei Vasilevsky at all. 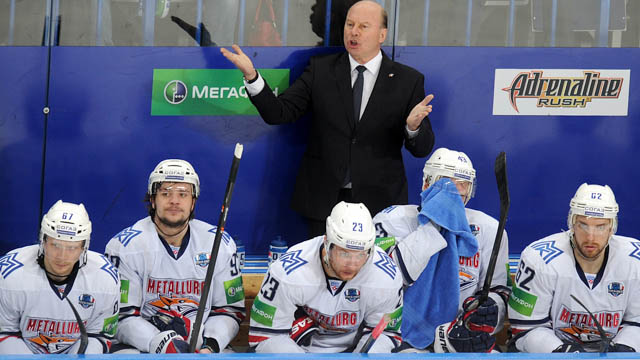 At the other end, some increasingly sloppy defense helped Salavat rattle up a confidence-boosting scoreline, renewing faith that the team could make a contest out of this Eastern Conference final.

Pihlstrom led the way with two goals: his opener came on the game’s first power play, putting away a one-timer off Igor Mirnov’s pass. The second, and Salavat’s third, also came on the power play, deflecting a Kirill Koltsov slap shot past Alexander Pechursky.

Pechursky joined the action after Anton Slepyshev put Salavat Yulaev 2-0 ahead early in the third. His close-range finish on a poorly-positioned Vasily Koshechkin proved the end for the goalie. But his replacement had little more joy, giving up the fourth goal through the five-hole as his defense parted all too easily in front of him.

At the other end Vasilevsky made 22 saves for his first career post-season shut-out, while Magnitka failed to score for the first time in this playoffs.