Rock solid defense is moving Lev to the brink of the Gagarin Cup final – and another lockdown on Lokomotiv’s forwards paved the way for a third successive win.

Two goals from Martin Thornberg did the damage at the other end, but it was an implacable back line that really put this game firmly into the Czech team’s favor. After an even opening period ended with Lev 1-0 in front, the visitors put the brakes on Loko’s offense. The home team mustered a miserly two shots on target in the second period, and added just one more in the first 10 minutes of the third. Goalie Petri Vehanen made 25 saves for his second shutout in three games, while Lev has now conceded just once in its last four outings.

There were a few anxious moments, most notably in the second period Tomas Kubalik had to work hard to distract Geoff Platt when the forward seemed to be on the brink of touching Yegor Yakovlev’s pass into an empty net to tie the score.

Away from defensive heroics, however, it was Thornberg making the difference. The Swedish forward had been the key man in the first round against Medvescak, posting points in every game, before going quiet against Donbass and in the opening games against Lokomotiv. But on Sunday he returned to form in style with two vital goals. 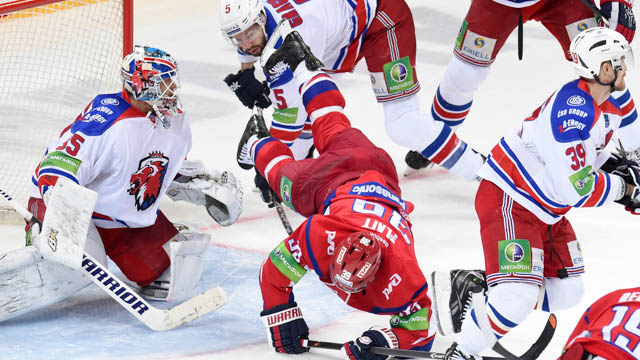 His first came late in the opening session, meeting Petr Vrana’s pass from behind the goal with a one-timer that beat Curtis Sanford. The second was deep in the middle stanza, and it took the video official to confirm that his shot from a tight angle had indeed made it into the top corner.

Any hopes that Lokomotiv could finally get among the goals and launch a challenge in the third period were dashed early on. Natan Oystrick’s blue-liner seemed to clip Staffan Kronwall’s stick and the deflection left Sanford stranded as the puck flew inside the post.

At 0-3 in the game, and facing a 0-3 deficit in the series, the home fell silent. Although the team rallied in the closing stages, finally mustering some serious shots on Vehanen, it was already too late to save this game … and time is now running out for Loko to save the series and keep its Gagarin Cup hopes alive.