Metallurg goalie Vasily Koshechkin pulled off a world-class save deep in the last minute of regulation to save his team from defeat – and the ever-reliable Sergei Mozyakin went on to win it for Magnitka in overtime.

Koshechkin was sent sprawling across the crease with just 15 seconds left in the third period, spreading himself to prevent Igor Mirnov turning in Alexei Kaigorodov’s pass and tie the series at 1-1.

But instead of levelling the series, Salavat must now return to Ufa staring down the barrel of a 0-2 deficit. It took more than 20 minutes of overtime to separate these two teams, but when the decisive goal arrived there was little surprise about the identity of the scorer.

Mozyakin, who had got the game-winner last time out, settled this game 65 seconds into the second additional period. All it took was a little space in front of goal and a pass from Viktor Antipin: the forward collected the puck at the bottom of the circle and advanced to the slot before tucking it away on the backhand to win the game.

Earlier Metallurg took the lead in the 10th minute when Danis Zaripov unleashed a one-timer off a Chris Lee pass, giving Andrei Vasilevsky no chance. But Magnitka only mustered two shots in the first session, despite plenty of threatening moments, with Salavat Yulaev defending stoutly.

At the other end Koshechkin was rather busier. Kaigorodov tested him several times, and the goalie needed to react smartly soon after the goal when a Kaigorodov effort almost dropped for Mirnov to convert the rebound from the slot.

Koshechkin was beaten in the final second of the opening period, though: Teemu Hartikainen played a pass from his own blue line and Antti Pihlstrom collected the puck, got away from Vladimir Malenkikh and deceived the keeper to finish from close range right before the siren sounded.

Salavat went ahead on the power play early in the second, Mirnov smacking home a one-timer after Andrei Zubarev’s shot flashed wide and rebounded back off the boards, but despite continuing to lead the shot count the visitor could not extend its advantage.

That proved costly in the final session when Metallurg finally starting to get some shots on target – and eventually found an equalizer. A marauding run from young defenseman Yaroslav Kosov carved a swathe through the Salavat rearguard and his pass was converted in by Francis Pare, who shrugged off his opponent at the far post. 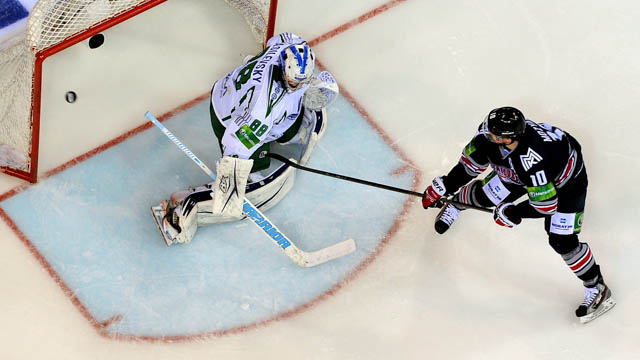