A tale of two goalies 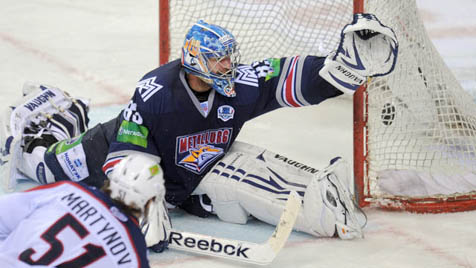 Offense wins games, defense wins championships. Or so the conventional wisdom goes. Which might be why, despite the awesome firepower assembled on Metallurg’s Mozyakin-Kovar-Zaripov line, the outcome of this series could be decided by an intriguing goaltending duel.

It’s a clash of generations as the experienced Vasily Koshechkin of Metallurg Magnitogorsk lines up against the hotly-tipped 19-year-old Andrei Vasilevsky of Salavat Yulaev. The pair have already impressed in these play-offs: Koshechkin was voted the top goalie in round two after allowing just seven goals in a series sweep against Sibir, while Vasilevsky got the nod as the best rookie after facing down Barys’ potent offense over six games.

For Koshechkin, high-pressure hockey is nothing new: he’s featured in two successful Continental Cup campaigns with Lada and Ak Bars, and has been part of five World Championship campaigns for team Russia, getting on the ice in the 2009 golden campaign and the bronze medal win of 2007. He’s also coming off the back of an impressive regular season which included nine shut-outs.

Meanwhile Vasilevsky is still learning his trade. This is his first play-off campaign – last season, although he featured in the regular season he was used as cover for Iiro Tarrki in the play-offs, staying on the bench as Salavat edged Magnitka in seven games during round one. But he’s shown strong signs of maturing into a top-class goalie: on his return from the 2013 World Juniors he made his senior club debut and delivered a vital shut-out in a 1-0 win over Dynamo Moscow. Subsequently he’s established himself as Vladimir Yurzinov’s first-choice between the piping this season and now faces probably his greatest test to date.

The two teams met a year ago in the play-offs, with Salavat prevailing in seven games. But there’s a key difference in the Magnitka team. A year ago this was a club in transition, with many of the cracks papered over by Evgeny Malkin’s blistering regular season form during the lock-out. After his departure, players like Cal O’Reilly and Mats Zuccarello struggled to keep the scoring ticking over. This season the all-conquering troika of Sergei Mozyakin, Jan Kovar and Danis Zaripov has been irresistible. With Mozyakin orchestrating much of what is good about his team’s offense, the Magnitogorsk team has dropped just one game in seeing off Admiral and Sibir; Mozyakin has delivered points in all but one of those encounters, making him the most feared forward of the post-season. Metallurg has yet to contest the KHL’s top prize, but the signs suggest that Mike Keenan might be the man to lead them there this time around.

Salavat has found things more demanding – a seven-game struggle with Torpedo was followed by victory over Barys in six. There’s no stellar scoring to compare with Magnitka, and the defense is posting ordinary +/- numbers. On paper, it should be a relatively straightforward mission for Metallurg, but Salavat has already successfully fended off one potent attack in the previous series. If Vasilevsky’s goaltending can keep Mozyakin & Co at bay as effectively as it blunted Barys’ North American troika, the Ufa team could yet find itself in its second Gagarin Cup final. 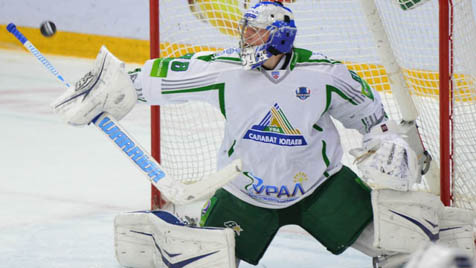 What they’re saying
“We play as a team, not just one line. Sure, the coach trusts us and we get a lot of ice time. In my opinion we have an excellent rapport between us, and I’ve always been lucky with that. At Atlant I played with Albert Leshchev and Nikolai Pronin, then, last season at Magnitka, my line with Evgeny Malkin and Nikolai Kuyomin wasn’t bad either.” – Sergei Mozyakin, Metallurg Magnitogorsk.

“We’ve got this far thanks to our character and the way the coaches have built this team. They found the right words to bring us together, but there’s no time to dwell on that. Now we’ve got a tough series ahead. We know Metallurg very well, and we played them in the last play-offs.” – Alexander Pankov, Salavat Yulaev.