Fairy-tale final in the West

It’s a story of dark horses and proud lions, of a city in the heart of Russia rejoicing under its new King and a pretender from beyond the borders seeking to make history. It’s the Western Conference final. 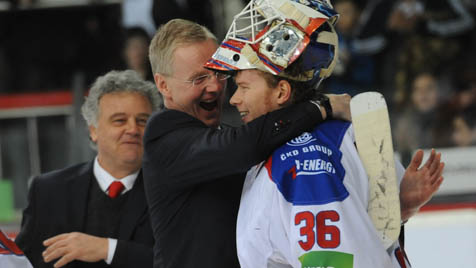 The lions of Lev are hoping to become the first team from outside of Russia to reach a Gagarin Cup final, planting the Czech flag at the summit of the KHL and bringing the top prize to Prague. After dispatching Medvescak and Donbass, Kari Jalonen’s men have already made it deeper into the play-off than any non-Russian team previously – and after finishing third in the Conference, the seeding suggests they should be favorites to go further.

Against them, though, is the Lokomotiv fairy-tale. Dave King arrived from Canada to become the third man to stand behind the bench in Yaroslavl this season. When he landed beside the Volga his team’s play-off hopes were in doubt, but four straight wins at the end of the regular season saw Loko sneak into eighth place. Then defending champion Dynamo Moscow was dethroned, and leading pretender SKA went the same way. With a largely home-grown roster seeking to complete the club’s recovery from 2011’s tragedy, Loko remains the neutral’s choice even if the league table suggests it should be an outsider once again here.

Realistically, though, there’s no clear favorite in this series. Loko has the tradition, with three national championship titles and a runner-up spot in the first ever KHL season. Lev is only in its second campaign, but has proved difficult to beat this time around and has established itself as a popular team in a city with two well-established pro hockey organizations, Sparta and Slavia.

On the ice, Loko has gone with a mix of youth and experience: two Gagarin Cup winners in the form of Ilya Gorokhov and Sergei Konkov both played a big role in seeing off SKA, while youngsters like Sergei Plotnikov and Vyacheslav Kartayev have matured into big game players this season after getting a brief, unsuccessful taste of play-off hockey a year ago.

Lev’s roster, meanwhile, is also relatively youthful – only experienced Finnish duo Petri Vehanen and Niko Kapanen are into their mid-30s and the average age is around 27. Even so, there’s plenty of big game experience. Those two Finns have also lifted the Gagarin Cup while playing for Ak Bars, while Jakub Klepis got the game-winner for Dynamo in its 2012 game seven decider against Avangard.

If there is a big difference to be found in the teams’ progress so far, it perhaps comes in the scoring. Lev has tended to spread goals around: in the first series Martin Thornberg was the main man, but Justin Azevedo joined him on four goals by the end of the second round and Jiri Novotny has a handy habit of picking up game-winners. Overall, though, Lev’s players make no impact on the ‘top fives’ among the play-off stats.

Loko, however, has Konkov, whose seven goals make him the joint-top goalscorer in post season. It also has Curtis Sanford between the piping. He tops the save percentage charts with 95.5%, has a tie for shut-outs (2) and is second only to Torpedo’s Ivan Kasutin for GAA (1.7). Kasutin, it’s worth noting, only featured in six games before his team was dumped out by Salavat Yulaev; Sanford has faced down two of the KHL’s top teams.

Whether he can maintain that form against a well-drilled Lev offense will go a long way to deciding the upcoming series, which starts Wednesday in Prague’s O2 Arena. 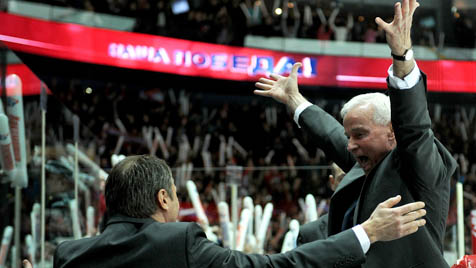 Head-to-head
Oct. 26: Lokomotiv 0 Lev 2
Dec. 6: Lev 0 Lokomotiv 1 (OT)
What they’re saying
“Yaroslavl plays a distinctive style, typical of old-school Russian hockey. They play one-on-one, they don’t give you any room. Plus they have a Canadian coach who has built in a bit of a Canadian style. There’s no favorite in this series.” – Ondrej Nemec, captain of Lev.

“We feel we’ve already played three series, starting with the last four games of the regular season when we were fighting to get into the top eight. So right now we’re a tired team. But this team has character, it has heart and we’ve got really good players who’ve made great progress over the past month.” - Dave King, head coach of Lokomotiv.