Defining duels – the key players in the battle for the East 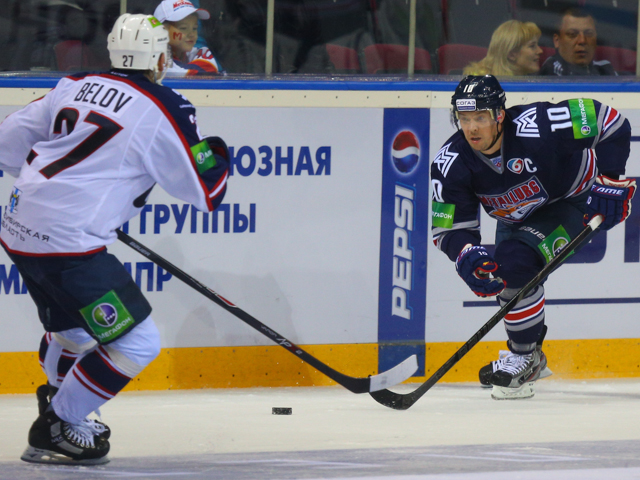 The Mozyakin-Kovar-Zaripov trio combined for 27 points as Magnitka rolled over Admiral in five, with Sergei Mozyakin perhaps proving the star of the show. The winger only scored once – the game winner in Game 5 to settle the series – but his nine assists included some terrific individual plays to supply the bullets for Jan Kovar to fire home. Not surprisingly, he’s had more game time than any other forward in the play-offs, just ahead of Kovar. Nobody who follows the KHL can be unaware of the threat posed by the league’s most consistent scorer, but watching Mozyakin’s orchestrate Magnitogorsk’s offense begs all sorts of questions of opposing coaches.

All that firepower adds up to a huge problem for Sibir – a team which was allowing more than 30 shots a game in its series against a less than prolific Ak Bars roster.

However, there is hope: goalie Mikko Koskinen played a solid series for a 94.7 save percentage and a GAA of 1.5, and with the exception of a 3-6 defensive horror-show in Game 4 the Novosibirsk team did a good job of keeping the scores down. Much of this was due to the defense pairing of Alexander Kutuzov and Konstantin Alexeyev. True, the defensive stalwarts didn’t put up many points, but both players returned +7, the best numbers on the team. Indeed, they wobbled only once, being on the ice together for the first three goals in that 3-6 reverse. In the other five games, Ak Bars managed just one goal when either of those two were patrolling the blue line. Like many on the Sibir roster, these two have spent a long time with the club – Alexeyev’s entire career has been here, while Kutuzov joined early in 2008 and, apart from a short stint at Dinamo Minsk, is a regular fixture in Siberia.

Going forward the familiar threat of Finnish pair Jori Lehtera and Jonas Enlund has been enhanced by a sudden surge from Dmitry Monya. This young forward returned 2+4 from the series against Ak Bars and is showing signs of developing into the player CSKA thought they’d unearthed through their youth system. The Moscow club’s takeover and big-money reinvention left Monya surplus to requirements but, along with fellow ex-Army man Dmitry Kugryshev he’s settled into a new role at Sibir with quiet efficiency. The 25-year-old is also enjoying an effective 2014 thus far – since the turn of the year he’s notched 12 points in 14 regular season games, more than half his overall tally, before going at a point a game post-season.

Head-to-head
Sep. 18: Metallurg 3 Sibir 2 (OT)
Jan. 25: Sibir 2 Metallurg 1
Barys vs Salavat Yulaev
Whatever happens when Barys meets Salavat Yulaev, it’s likely to involve goals. Lots of goals. Barys was the KHL’s top scorer in the regular season, finding the net 182 times. But it was also the weakest defense, leaking 157 goals. However, Salavat was the next most precarious team at the back, shipping 140 goals – the kind of offer that’s likely to be hard for Barys’ forwards to resist. Oh, and the teams shared 14 goals in their two earlier meetings this season. Expect to see the nets bulge. 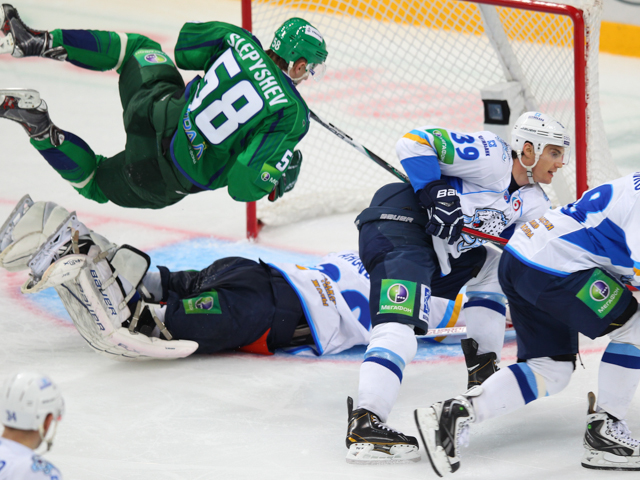 However the Kazakh team’s scoring patterns shifted in the play-offs. After relying heavily on the North American Bochenski-Boyd-Dawes combination in the regular season that line delivered a solitary Brandon Bochenski goal as Barys swept Avtomobilist in round one. Instead, the big contribution came from the second line, where Roman Starchenko (4+0), Konstantin Rudenko (1+3) and defenseman Roman Savchenko (2+2) led the team’s scoring while Nigel Dawes and Dustin Boyd went pointless through the series.

The sudden drop in first-line firepower is a worry: although the Conference runner-up dealt with its opening round outsider in four games, two of them went to overtime and the other two were tight 2-1 verdicts. The job was done efficiently, but not thrillingly.

Defensively things have been improving, with experienced goalie Vitaly Yeremeyev lifting his GAA to 1.71 (against 3.01 in the regular season). However, Avtomobilist’s forwards don’t pose the same threat as Salavat Yulaev’s are likely to offer. The goal-scoring in Ufa came from a mixture of familiar faces and unexpected successes, while Alexei Kaigorodov’s five assists made him the top point scorer and key architect of his team’s offense.

Igor Mirnov and Yegor Dubrovsky top-scored with four apiece: little surprise from the consistent Mirnov but a step forward for Dubrovsky, who only made the step up from Salavat’s VHL farm-club Toros this season and was something of a bit part player until the play-offs began. He hardly arrived in post-season at the peak of his form, having failed to score since Dec. 1, and didn’t feature in the opening game against Torpedo. But once in the side he began to deliver, picking up three power play goals in his quartet to help turn a 0-2 deficit into a 3-2 advantage in the series.

That went a long way to compensating for a disappointing return from Dmitry Makarov. Salavat’s leading scoring in the regular season posted 40 points, but up against his former club he could only manage 1+1.

However, the defense is a concern here too: as well as shipping 140 in regular season, the Ufa team also reminded everyone of its frailties in a 6-2 Game 6 hammering in the first round. Young goalie Andrei Vasilevsky is a hot prospect between the piping, but he needs better protection from a defense which allowed an average of 33 shots per game against Torpedo. Giving that kind of opportunity to Barys will surely be fatal.