Play-off hockey is an emotional roller-coaster, and an occasion for new chapters to be written in the history books. And that’s certainly what fans in Novosibirsk witnessed as Sibir edged a 3-2 victory in double overtime to clinch its first ever KHL series victory.

The scenes after the winning goal were as jubilant as if the club had already hoisted the Gagarin Cup – from the snowman mascot prostrating himself on the ice to the rapturous ovation of the spectators, many bright-eyed with tears of joy, the arena in Novosibirsk experienced an outpouring of the emotions pent-up since last year’s first-round near-miss against Avangard.

Fittingly the historic winning goal went to Stepan Sannikov, a 23-year-old whose entire career has been spent with Sibir. He finally forced home the puck after Ivan Lekomtsev’s slap shot sowed confusion in front of Emil Garipov’s net to spark huge celebrations in the 7,400 crowd.

Triumph was tinged with relief, however, as Sibir had to battle back from 0-2 to tie it up before both sides endured more than 25 anxious minutes of overtime before Sannikov settled the outcome of both game and series.

Ak Bars, knowing that only victory would do, seemed to have a stranglehold on events after scoring twice in quick succession soon after midway. Evgeny Medvedev’s shot from the point squeezed through Mikko Koskinen’s defenses, and within three minutes Alexander Svitov had doubled the lead, tucking away a backhander from close range.

But at the start of the final period Sibir repeated precisely that trick, scoring twice in three minutes to level the scores. Dmitry Kugryshev got the first, then just as Alexander Burmistrov returned from the penalty box Alexander Kutuzov found the net from the blue line.

While Sibir celebrates a historic achievement, Ak Bars is left to confront an unwelcome historical marker: this is the first time in the KHL that the Kazan team has failed to progress beyond the first round of the play-offs, and indeed the first time since 2005 that the hockey season has ended so early in Kazan. 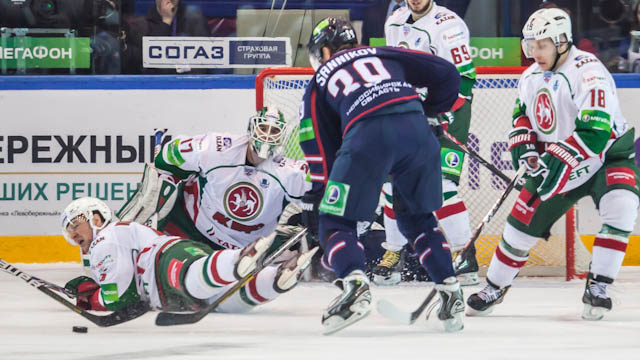 Torpedo seized control of this game in the third period, grabbing four unanswered goals to down Salavat Yulaev 6-2 and taking the series to a decider in Ufa on Tuesday.

With the scores poised at 2-2, and the visitor on the up after clawing back a 0-2 deficit, two goals in 30 seconds steered the outcome firmly in Torpedo’s direction. First Vladimir Galuzin produced a slick one-timer to convert Vadim Krasnoslobodtsev’s neat play, then Sakari Salminen pounced on a loose puck to stretch the lead. That was the second time Torpedo landed a double whammy, and this time it proved to be a decisive blow.

Salminen went on to get his second of the night and fellow Finn Jarkko Immonen also added his second as Torpedo eased to a comfortable victory, but earlier it had looked as though Salavat Yulaev might battle back to settle the series here in Nizhny Novogorod.

The visitor recovered well from the shock of conceding two quick-fire goals in the last minute of the opening session, with Dmitry Makarov pulling one back right on the siren. Then Yegor Dubrovsky leveled the scores midway through the second stanza as Salavat dominated. It looked as though the Ufa team was poised to go on and win the game, but by the 49th minute those hopes were in tatters and Game 7 was already primed and ready to go. 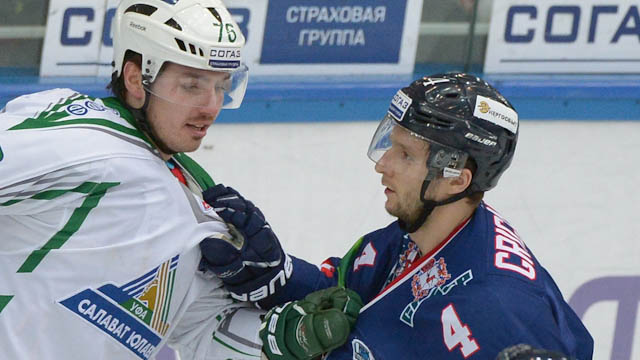