The clocks were close to midnight in Vladivostok when Metallurg’s hopes of securing a series sweep over Admiral exited as abruptly as Cinderella from the ball. It took 85 minutes to finally separate the teams after a 3-3 tie as Admiral completed a thrilling home play-off debut triumphantly thanks to Ilya Zubov’s 86th-minute goal.

It was a strike worthy of winning any game: Zubov started the move behind his own goalline then collected an Igor Bortnikov pass on the blue line before advancing to fire inside Vasily Koshechkin’s near post.

It was Zubov’s second of the night – he also got Admiral’s 2-1 goal on a rebound – and his scoring feat was matched by Felix Schutz, who twice scored off Richard Gynge passes. Magnitka found three equalizers, from Danis Zaripov, Mikhail Yunkov and Chris Lee, but was unable to stretch its advantage in the series to 3-0 and now knows it will continue battle in Magnitogorsk after tomorrow’s game.

After two rounds of overtime, Barys finally managed to settle a game with Avtomobilist in regulation time. Even so, the winning game came late, with Konstantin Rudenko (pictured) getting it in the 57th minute. Once again it was a player from the Barys second line who did the damage, and once again Nik Antropov’s awkward presence on the slot helped to screen Jakub Kovar as Rudenko fired home.

For Avto victory was crucial, and the Yekaterinburg team made a good start when Artyom Chernov scored for the third time in three games to give the hosts a seventh-minute lead on a counter-attack. But Rudenko set up Konstantin Romanov for an equalizer early in the second and once again neither side was capable of really taking control of the game until the late stages.

Victory puts the Kazakh team within a single game of progressing deeper into the play-offs; five previous attempts have ended in failure at the first hurdle, with last season’s 3-4 loss to Traktor being the most painful to date. 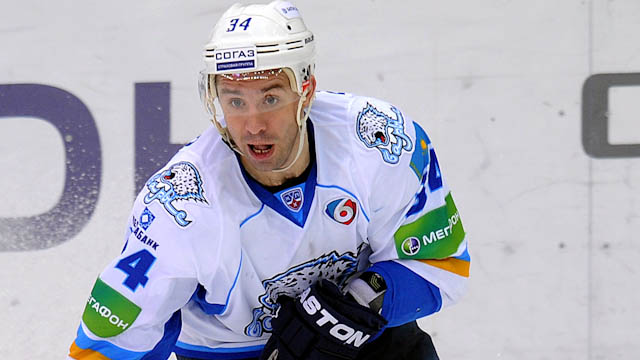 Jonas Enlund (pictured, with Monya) scored the first hat-trick of this season’s play-offs, leading Sibir to a crushing 7-1 victory and giving the outsider a 2-1 lead in the series against Ak Bars.

Enlund put away the first three goals of the game, completing his treble in the 26th minute with perhaps the best of the trio; after collecting Yegor Martynov’s pass he danced past Stepan Zakharchuk and beat Konstantin Barulin. Barulin’s evening was soon curtailed by Dmitry Monya’s goal to make it 4-0, but replacement Emil Garipov had little success either and the scoreline was 6-0 by the time of the second intermission.

Enlund only skated two shifts in the third period with Sibir coach Dmitry Kvartalnov looking to preserve his star’s fitness for the rest of the series, but the outcome was far beyond doubt. Mikhail Varnakov maintained his record of scoring in every play-off game thus far for Ak Bars before Oleg Gubin completed the rout for Sibir. 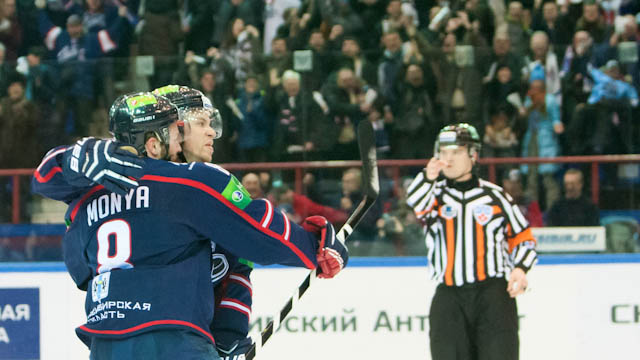 Torpedo and Salavat Yulaev played out the second longest game in KHL history before Alexander Stepanov stopped the clock at 113:24, just over five minutes short of the record set by Severstal and Lokomotiv a year ago.

Stepanov’s goal gave Salavat Yulaev a precious overtime victory, and a lifeline in the series after two home defeats.

But even after the puck beat Ivan Kasutin, the waiting wasn’t over: the video official was called in to rule on whether the disc had fully crossed the line after Stepanov’s shot bounced off the goalie’s helmet and dropped onto the goal-line. After a further agonizing pause, back came the verdict: the goal was good, and the epic clash was over at last.

Earlier Igor Mirnov had given Salavat the lead, turning in a Kirill Koltsov shot in the last minute of the first period. There were few chances at either end, but Torpedo managed to tie it up in the 45th minute when Mikhail Grigoryev forced the puck home at the near post off an Alexei Potapov pass. 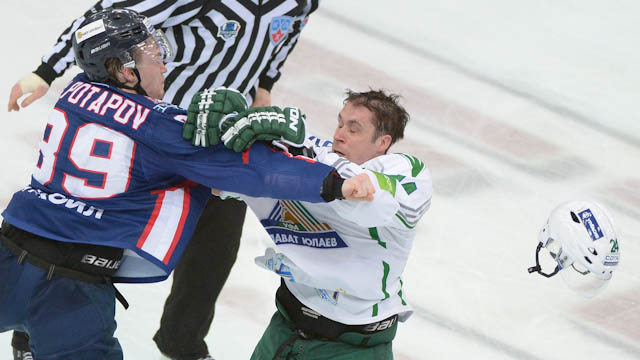