Game 1 of this series was all about Magnitka’s goal-greedy first line; Game 2 was all about the team’s strength in depth. Just one day after Sergei Mozyakin orchestrated a 3-1 win for his team Admiral stepped up its defense around the danger-man and limited his line to a single goal. But if Mozyakin and Jan Kovar managed just one point each, assisting Chris Lee’s power play goal to complete the scoring early in the third, the rest of Magnitogorsk’s attack was ready to take up the slack.

Viktor Antipin opened the scoring in the third minute, only for Niclas Bergfors to tie it up at the start of the second. Admiral had the edge in terms of shot on goal, but it was Magnitka which proved more clinical: Yaroslav Kosov and Tim Brent found the net within 11 seconds of each other to stretch the lead to 3-1 and the visitor never quite recovered.

Play-off hockey makes its first ever trip to Vladivostok on Tuesday, and with a 0-2 deficit to make up Admiral will need to wring every last drop out of its home advantage if it is to get back into contention. 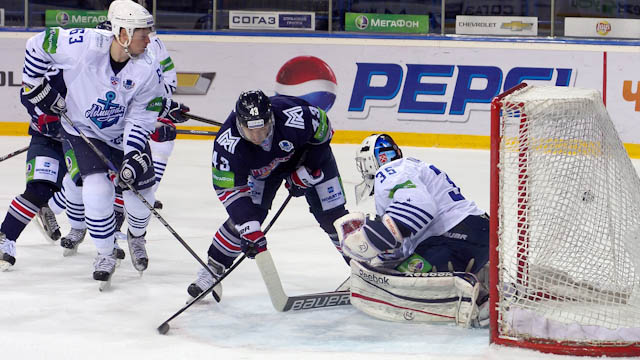 For the second game running Barys needed overtime to shake off Avtomobilist. Mike Lundin got the all-important goal, breaking a 4-4 tie as he forced home the rebound from a Cam Barker shot in the 78th minute.

But for the second game running Avto showed enough to suggest that the series is far from a foregone conclusion, even if Barys now holds a 2-0 lead. Fyodor Malykhin, who orchestrated a turnaround which put the visitors up 3-2 in the second period, demonstrated once again why he’s been a threat all season, while the defense did a good job of closing out the effective Bochenski-Dawes-Boyd troika for much of the game. That line has just one goal in the series so far.

However, Barys has found an alternative source of goals in this series: Roman Starchenko found the net twice to add to his double in game one, and that ultimately tipped the balance in Barys’ favour. 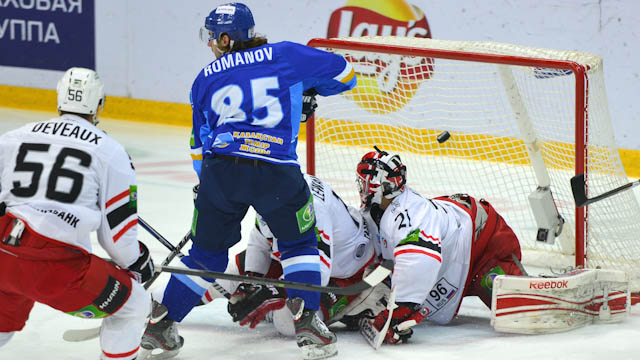 Mikhail Varnakov’s last gasp goal for Ak Bars proved to be a turning point in Game 2 – and could yet be the key moment of the series against Sibir. Varnakov got his second marker of this year’s play-off, roofing the puck from the slot off a Tim Stapleton pass and tying the game at 2-2 with just 58 seconds left to play.

It completed a recovery from 0-2 in the game and in overtime Alexander Osipov denied Sibir a 2-0 lead in the series. He got his second of the night in the 68th minute, putting away the rebound from Janne Pesonen’s shot to give the Kazan team a vital victory.

Early the outsider had threatened a second successive surprise. Dmitry Monya caught everyone by surprise when he opened the scoring after just 15 seconds and Dmitry Kugryshev doubled that advantage in the last minute of the middle session. But Osipov reduced the deficit before Varnakov’s late intervention. 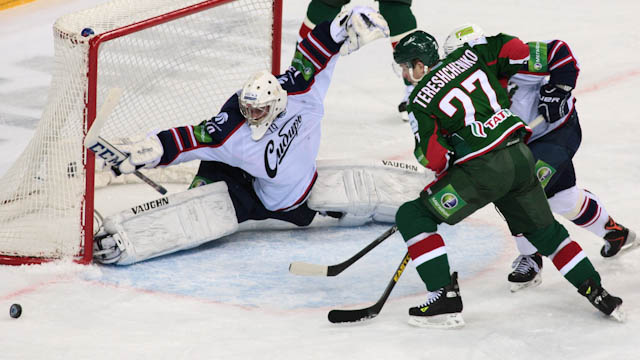 Krystofer Kolanos, who only arrived in Russia during the Olympic break, got the vital goal for Torpedo in a narrow win in Ufa. The Canadian, whose most recent action came in the AHL with Abbotsford Heat, settled Game 2 of this series in the 25th minute, collecting Denis Parshin’s pass and beating Andrei Vasilevsky at the second attempt.

That was enough to take to Topedo to a 2-0 lead in the series, but the win owed just as much to goalie Ivan Kasutin. He had 34 saves for his shut-out in a game where Salavat Yulaev out-shot its opponent 34-18 but could not find a way to tie the scores. After attracting criticism for a sluggish performance in yesterday’s defeat Salavat produced a far more aggressive display in a hard-fought game – which saw 37 hits in total – and occasionally threatened to bubble over into outright violence in the minutes immediately after the goal. At play-off time, no team can afford to step back from a physical battle and in this instance neither team did.

Torpedo, despite being seen as the outsider before the series got underway, now holds a commanding advantage as the action moves to Nizhny Novgorod on Tuesday. 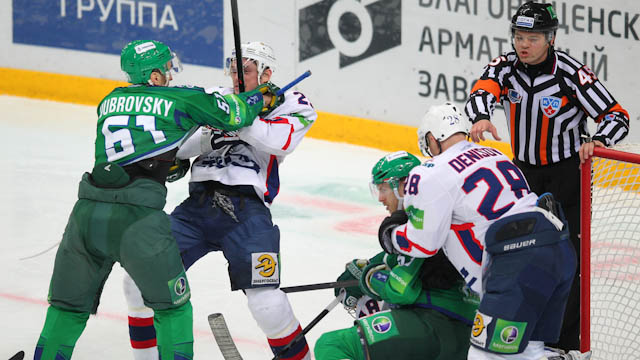