The play-offs’ biggest underdog bared its teeth early – but Magnitka’s prolific Jan Kovar led the way to a comfortable win for the Eastern Conference’s strongest contender.

Admiral certainly startled its high-flying host, however, snatching a third-minute lead through Alexei Ugarov. His power play goal might have been intended as a pass towards the slot, but it slipped through Vasily Koshehckin’s defenses to open the scoring.

The lead did not last long, however. Kovar tied it up with a simple finish after Renat Ibragimov’s shot bounced out in front of goal then Danis Zaripov put Magnitka in front after a terrific play from Sergei Mozyakin. Before the first intermission, Kovar stretched that lead, with Mozyakin again tormenting Admiral’s defense and creating a straightforward opportunity for his team-mate.

The rest of the game was scoreless, with Metallurg content to keep Admiral at bay rather than chase hard for extra goals. 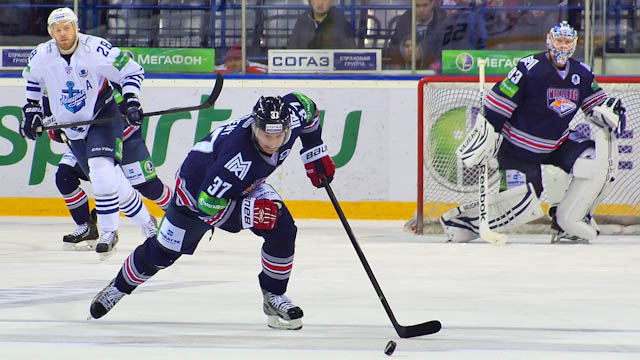 Roman Savchenko spared Barys’ blushes in its play-off opener, snatching an overtime winner 42 seconds in the second additional session of the night. Savchenko’s mighty shot from the blue line whipped through the traffic generated by Nik Antropov and Konstantin Rudenko to beat Jakub Kovar and inch Barys ahead in the series.

Barys qualified for the play-offs early, but an end-of-season slump saw the Kazakh team lose its last four games. And facing an Avtomobilist team in good spirits after securing an unfamiliar extension to its campaign the second seeds in the East found things tougher than the league table might suggest. Avto shaded a scoreless first period and took the lead just 35 seconds after the first intermission thanks to Artyom Chernov.

Unusually the Barys response came from the second line, rather than the North American troika that has dominated the club’s scoring this season. Roman Starchenko tied it up on 24:00 and put his team in front in the 45th minute, only for Sami Lepisto to level the scores two minutes later and take us into overtime. 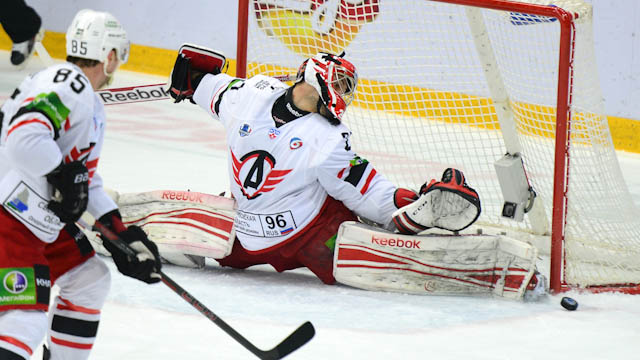 It was scripted to be Zinetula Bilyaletdinov’s triumphant return to Kazan – but Sibir clearly hadn’t learned its line ahead of Bill’s arrival as GM of Ak Bars and pulled off the biggest surprise of the play-offs so far thanks to a second-period storm.

When Mikhail Varnakov surged through on goal, leaving two defensemen in his wake, and put Ak Bars ahead in the ninth minute, it seemed that all was well with the home team and its prospects. But the second session shattered Ak Bars’ composure and set Sibir on the path to victory.

Jarno Koskiranta tied the scores in the 22nd minute, completing a well-worked move when he turned in a Dmitry Kugryshev pass at the far post. Then Igor Ozhiganov gave Sibir the lead with a fearsome one-timer from the point, silencing the home crowd. Worse was to come for the hosts, though: Sergei Shumakov stole the puck on the red line, rushed on goal and dropped the puck off for Oleg Gubin to make it 3-1 before the second intermission. 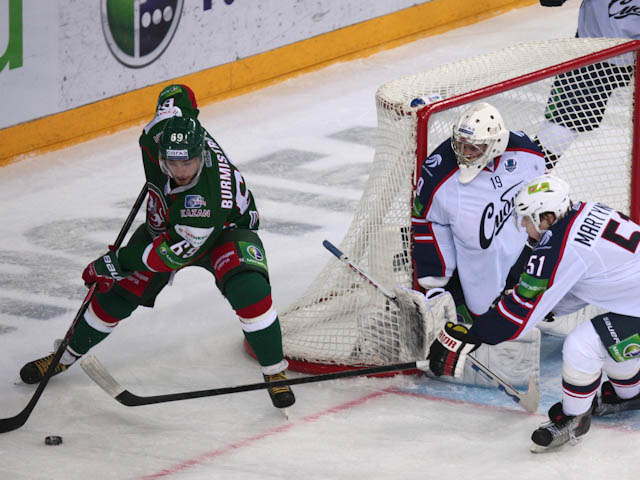 Alexei Badyukov endured a miserable regular season, failing to score for either Avangard or Torpedo. But the two-time Gagarin Cup winner picked the perfect time to open his account, setting the Nizhny Novgorod team on the way to victory in Ufa.

Badyukov opened the scoring in the 15th minute of a first period which the visitor had edged, firing through the legs of defenseman Anton Babchuk and leaving Andrei Vasilevsky unsighted in the Salavat goal.

The pressure on the home team intensified after the interval and Mikhail Grigoryev took just 18 seconds to convert a power play and double the lead midway through the second session.

Igor Mirnov pulled one back for the home team, but Evgeny Skachkov added a goal to his two assists to ensure that Torpedo took the win and became the first team to win against the seeding in this season’s play-off. 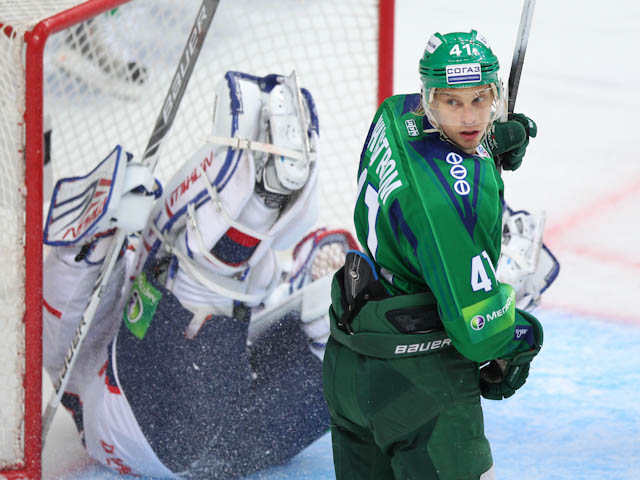