Dynamo Moscow had to draw on all its character to escape a shock defeat in Game 1 of its first-round play-off clash with Lokomotiv.

The defending champion trailed 0-2 after first period goals from Mikelis Redlihs and Sergei Plotnikov, before battling back in the third and eventually snatching an overtime winner thanks to Maxim Karpov.

Less than two minutes of overtime had been played when Karpov collected Andrei Mironov’s pass on halfway and advanced to the edge of the circle before ripping a wrist shot which flew over Curtis Sanford’s shoulder to give Dynamo the edge in the best-of-seven series.

But victory was a long time coming for the Blue-and-Whites after Loko showed off some clinical finishing early on. Redlihs converted a delightful backhand pass from Janis Sprukts to open the scoring on five minutes before Plotnikov continued his personal hot streak by forcing home the rebound from a Jonas Holos shot which came back off the boards.

Lokomotiv held onto that lead until the last 10 minutes, but two goals in 61 seconds shattered hopes of a shock win. Alexander Ryazantsev surprised Sanford from the point before Leo Komarov’s one-timer, off a beautiful pass from Maxim Pestushko behind the goal, tied the game at 2-2. 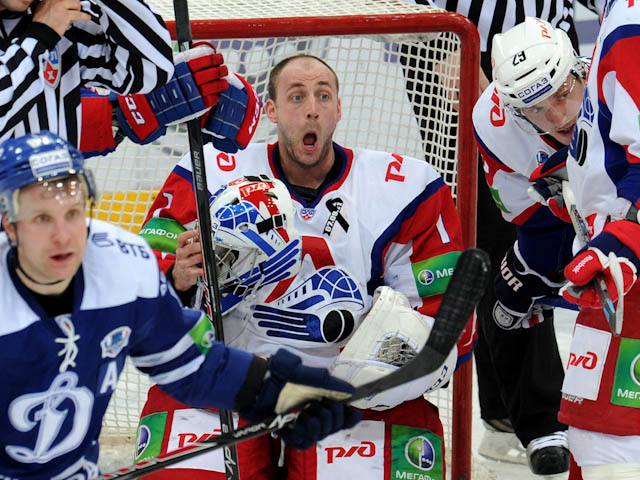 Small margins can make a huge difference in a hockey game, as CSKA’s Oleg Saprykin found to his cost at SKA. The forward had his team’s best chance in a tight encounter, surging through on Alexander Salak’s goal and forcing his shot through the Czech goalie’s pads. But there wasn’t enough power to see the disc cross the line, and SKA survived that scare midway through the second period.

It rather summed up CSKA’s night: good, with 43 shots on Salak’s goal, but not quite good enough. Victory went to the home team thanks to Andrei Sigaryov, a fresh-faced forward who got the only goal of the night in the 50th minute. The 20-year-old was used sparingly on SKA’s fourth line, but took matters into his own hands as he broke from his own blue line, advanced on goal and fired in a shot from the outer edge of the circle. Jeff Glass would normally gather that kind of effort easily, but this time he misjudged it and saw the puck sneak inside his near post. Small margins once again, but a huge moment for Sigaryov and SKA. 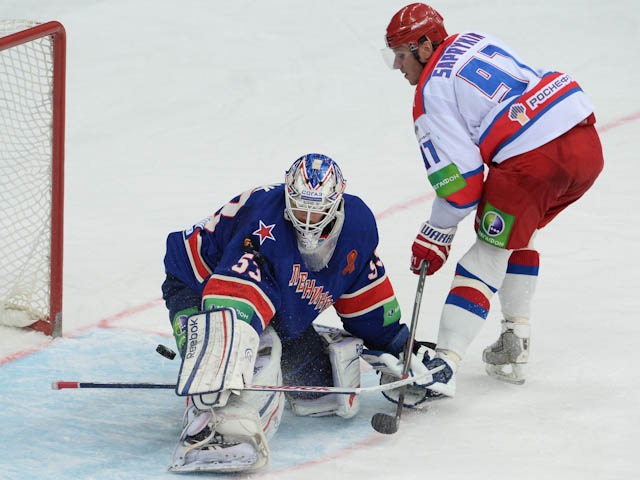 Two goals early in the third period set Lev on the way to victory over Medvescak as the Prague team clinched its first ever post-season victory. Last season Lev was swept by CSKA in its first play-off campaign, but this time it began with victory over the KHL newcomer.

The decisive spell at the start of the final session saw Petr Vrana break a 2-2 tie with a fine goal as he launched an unstoppable drive past Mark Dekanich from just inside the blue line. Less than three minutes later Martin Thornberg made it 4-2, tidying up the loose puck after Dekanich gave up a big rebound on a slapshot from Jiri Sekac. Matt Murley reduced the arrears for Medvescak, but Lev held on for a one-goal verdict.

The outcome was a fair reflection of the game: Medvescak was tenacious, and twice recovered losing positions, but Lev consistently produced more opportunities. Jiri Novotny opened the scoring after just 39 seconds, only for Matt Ellison to tie it up on the power play. Justin Azevedo ensured Lev went to the first intermission with the lead, but the Medvescak power play struck again in the second with Kurtis Foster finding the net. 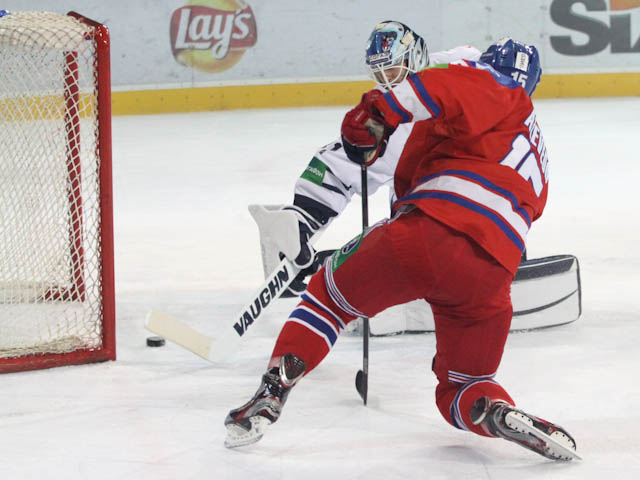 Play-off hockey arrived in Donetsk for the first time – and after an early wobble Donbass roared to a convincing 5-2 victory.

Dinamo Riga struck first, with Gints Meija forcing home the opening goal in the first period following a battle in front of the Donbass goal, but the second session saw the home side snatch the initiative. A power play goal for Petteri Wirtanen tied the scores before a short-handed breakaway saw Clay Wilson put the Ukrainian team in front in the 36th minute.

In the final frame Teemu Laine, who already had an assist on Wirtanen’s equalizer, came to the fore. He added two further goals, with Evgeny Dadonov completing the scoring for Donbass. Lauris Darzins got one back for Dinamo, but it wasn’t enough. 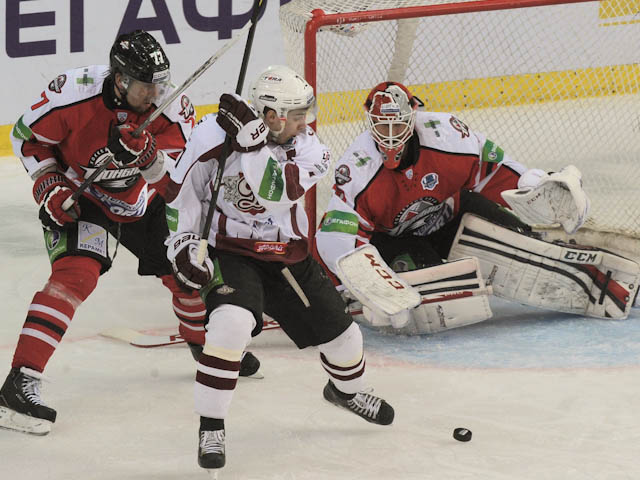