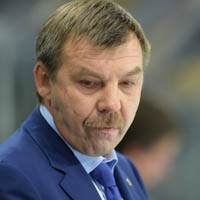 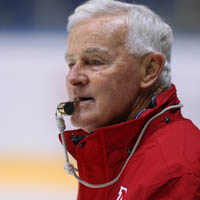 (1) Dynamo Moscow vs (8) Lokomotiv Yaroslavl
The KHL’s longest-serving head coach faces the league’s newest recruit. Oleg Znarok (left) is preparing for his fourth play-off campaign with Dynamo, while Dave King (right) has been behind the bench for just four games at Loko.

Znarok needs no introduction as he aims to lead the Blue-and-Whites to a third consecutive Gagarin Cup triumph; similarly his roster relies heavily on familiar faces. From goalie Alexander Yeryomenko, twice chosen as MVP for the play-offs, to a first-line troika of Leo Komarov, Konstantin Gorovikov and Maxim Pestushko, many of Dynamo’s weapons are well-known. But big names take a back seat to solid teamwork for the Moscow team, as Znarok perseveres with a proven formula.

King, who had an earlier stint in Russia at Metallurg Magnitogorsk, is the third man to stand behind Loko’s bench after Tom Rowe was replaced early in the season by Pyotr Vorobyov. Vorobyov is a club legend, and his ‘safety first’ approach steadied the team after an uncertain start and went a long way towards clinching a play-off spot which seemed unlikely for much of the fall. But in the last four games under the Canadian the team has shifted emphasis onto offense, scoring more than before. Loko’s prospects for progress will hinge on goalie Curtis Sanford maintaining his miserly form and youngsters like Daniil Apalkov and Sergei Plotnikov demonstrating how much they’ve learned from last season’s play-off experience. 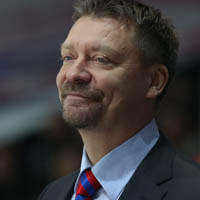 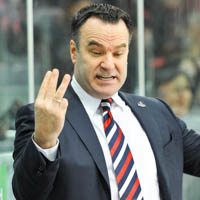 (2) SKA St. Petersburg vs (7) CSKA Moscow
The clash of the army clubs should have come later in the competition – both teams have big budgets and big ambitions to win the top prize. But while SKA has looked strong for much of the season, CSKA has flattered to deceive. Memorable moments, such as the Nikolai Prokhorkin-inspired victory over Dynamo, have been balanced by flat, under-powered displays which have reduced head coach John Torchetti (left) to fury.

SKA, with Ilya Kovalchuk leading the roster in terms of prestige and Artemy Panarin joining him at the top of the scoring charts, pose a potent attacking threat. It’s a team which has gone close in recent years, twice denied in the Conference final by Dynamo, and expectations around Jukka Jalonen (right) and his team remain high. If Kovi can deliver his ‘A’ game and the defense can remain solid throughout the post-season, there’s every reason for optimism by the Neva.

CSKA, meanwhile, needs to learn to pull out big performances consistently. The talent is there – the lively and unpredictable Alexander Radulov can be a threat to any team, including his own, while 20-year-old Prokhorkin’s emergence this term has been one of the bright spots of the regular season. But listless displays, especially from CSKA’s special teams, have hamstrung this team since September, and SKA represents a formidable obstacle if that is to change right now. 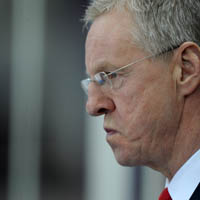 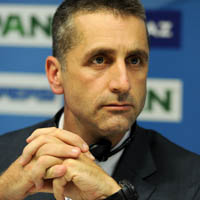 Solid defense has been key, starting with experienced Finnish stopper Petri Vehanen, who averages just 1.66 goals allowed in 41 games. At the other end, though, there hasn’t been a stand-out scorer. Martin Thornberg’s 18+13 from 53 games leads the way but it’s been a real team effort with no fewer than 19 players contributing 10 or more points. It’s also been a campaign built on resilience – with 18 of 54 games going beyond 60 minutes, and 12 of those resulting in victories for Kari Jalonen’s (right) team.

But for the neutral, the tale of Medvescak carries greater romance. Croatia is seldom regarded as a top hockey nation and the Zagreb team’s roster had little experience of playing at this level. But with skilful guidance from Mark French (left), solid goaltending from Barry Brust and Mark Dekanich and a plethora of points harvested by Jonathan Cheechoo (38), Matt Murley (36) and Ryan Vesce (35), the Bears have thoroughly deserved their play-off place. The team has also proved it’s one for the big occasion: memorable nights on home ice include a 7-1 thrashing of CSKA in its first ever game and a shoot-out win over SKA to leave Kovalchuk frustrated. 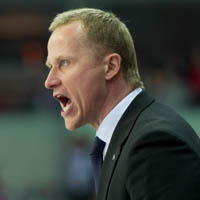 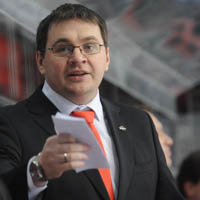 (4) Donbass Donetsk vs (5) Dinamo Riga
It’s hard to pick a winner between two teams which have been nip-and-tuck for much of the season. Donbass shaded the league standings thanks to a slender 1-0 victory in Latvia on the last day of the regular campaign, but in truth there’s little to choose between the two.

For Donbass it’s a first-ever KHL play-off campaign, but head coach Andrei Nazarov (left) has been here before with Severstal. A year ago he led the Steelmen to a surprise win over Lokomotiv in the first round before posing a powerful SKA roster more questions than expected in the second stage. Donbass has also been handed a boost after the KHL decided on Wednesday to allow the Ukrainians to stage home games in Donetsk despite the political uncertainty in the country.

On the ice, meanwhile, it will not be a clash of two Wilsons. Clay Wilson, of Donbass, has picked up 22 points from the blue line this season and stands as his team’s most potent defenseman. But he will not face Dinamo’s top-scorer Kyle Wilson (44 points) who is out with injury. Unless Artis Abols (right) urgently finds a decent substitution for Wilson’s prolific talent, his absence can influence the outcome of this evenly-balanced tie, especially after Donbass ended the regular championship as the only team to concede less than 100 goals.