Lokomotiv Yaroslavl completed the Western Conference play-off line-up with a 4-1 win over Avangard. Under the guidance of incoming head coach Dave King the team has thrown off its ultra-cautious style and scored 15 goals in three games to secure its post-season campaign.

Against Avangard the Railwaymen had to come from behind after conceding to Alexander Popov in the last seconds of the first period. But Geoff Platt tied it up within seconds of the restart, and a trio of third-period markers settled the outcome. Sergei Plotnikov got the game winner, Platt added his second of the evening and Kirill Kapustin completed the scoring. 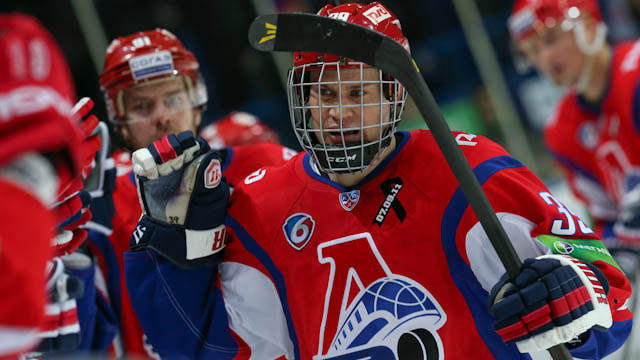 Loko’s only rival, Atlant, romped to a 5-1 victory over Ugra but cannot now overtake the Yaroslavl team. After Kirill Knyazev stunned the home crowd with an early goal, Maxim Velikov tied it up in the first period and unanswered goals from Alexei Mikhnov and Roman Rukavishnikov in the second set Atlant on the way to victory. 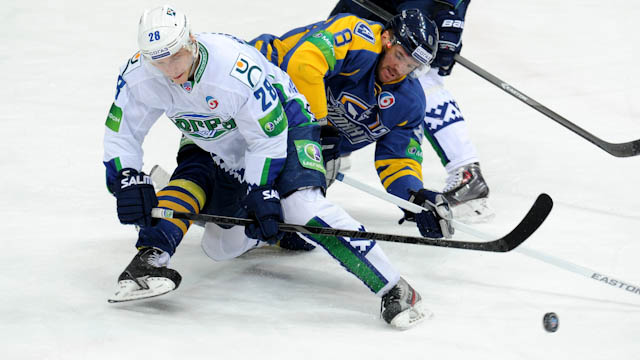 Traktor misses chance
Traktor failed to move back into the top eight in the East after suffering a 0-1 reverse at home to Torpedo. Victory would have given the Chelyabinsk team control of its play-off destiny but a goal from Vadim Krasnoslobodtsev and 27 saves from Georgy Gelashvili gave Torpedo the win.

Traktor, last season’s Gagarin Cup runner-up, now needs to rely on Admiral losing at home to Amur before Tuesday’s home game against Ak Bars if it is to get into this season’s play-offs.

Spartak wins at last
After a KHL record-breaking 19-game losing streak, Spartak finally tasted victory in the penultimate game of the season. A 3-0 win away to Slovan broke the curse that has hovered around the Moscow team since the collapse of its main sponsor and finally gave the long-suffering Red-and-White army something to celebrate.

Evgeny Kulik opened the scoring just after midway and Andrei Sergeyev doubled the advantage early in the final frame as Spartak got back to winning ways at last. Rastislav Spirko added the third and Igor Shestyorkin made 33 saves.

Around the league
Regular season champion Dynamo Moscow came from behind to win 3-1 at Salavat Yulaev. Tomas Zaborsky opened the scoring, but Yegor Dugin, Dmitry Vishnevsky and Maxim Pestushko turned it around for Dynamo. 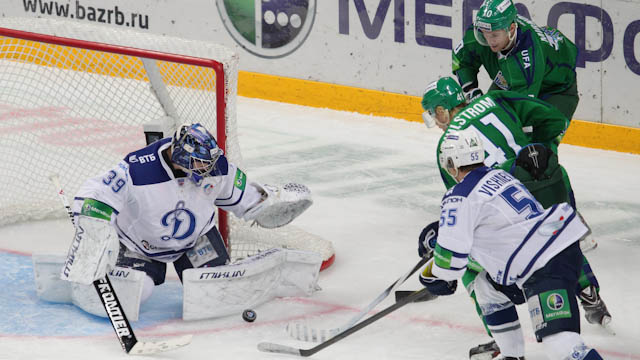 Metallurg Magnitogorsk ended its goal drought to edge a 1-0 verdict over Ak Bars. Magnitka had failed to score in open play since the Olympics, but Jan Kovar found the net in 7th minute to snatch the win and secure top spot in the Eastern Conference. 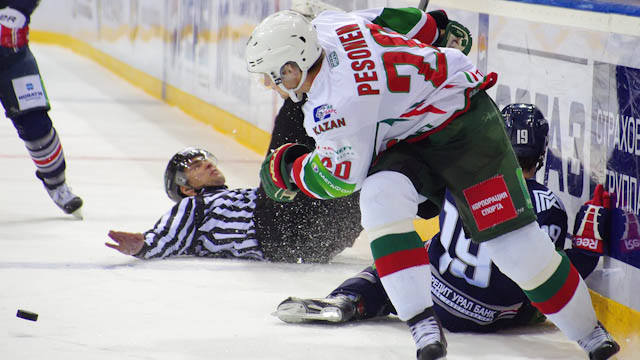 Ilya Ezhov blanked Avtomobilist with 29 saves as SKA claimed a 4-0 home victory. Yury Alexandrov opened the scoring late in the first; Ilya Kablukov and Artemy Panarin stretched the lead in the second and Patrick Thoresen completed the scoring late on.

Nikolai Prokhorkin got a shoot-out winner for CSKA following a 1-1 tie with Donbass. Earlier Alexei Morozov opened the scoring but Evgeny Dadonov tied it up.

A goal from Martin Thornberg gave Lev a 2-1 overtime win over Medvescak. In the first period Jiri Novotny cancelled out Michael Ryan’s goal for Medvescak.

Lowly Dinamo Minsk sank play-off bound Dinamo Riga with a quickfire second-period salvo. The scores were tied at 1-1 when Alexander Materukhin and Richard Lintner put the Belarusians in command midway through the game, and Minsk cruised to a 5-2 victory.

A dominant third period gave Neftekhimik a comfortable 5-1 win at home to Vityaz. The scores were tied at 1-1 after 40 minutes, but Andrei Taratukhin gave the hosts the lead on 43:27 and they never looked back.

Pavel Buchnevich scored in the 56th minute to give Severstal a 2-1 win over Barys.