Back in action. February 26 round-up

The KHL resumes after the Olympics with Dynamo Moscow closing in on the regular season title and the race for the last play-off spots hotting up.

Traktor, still in search of points to secure its play-off spot, pulled one back through Anton Glinkin but an empty-netter for Maxim Pestushko sealed the victory for Dynamo. The Moscow team moves to 108 points, and can confirm top spot with a win in Magnitogorsk on Friday. 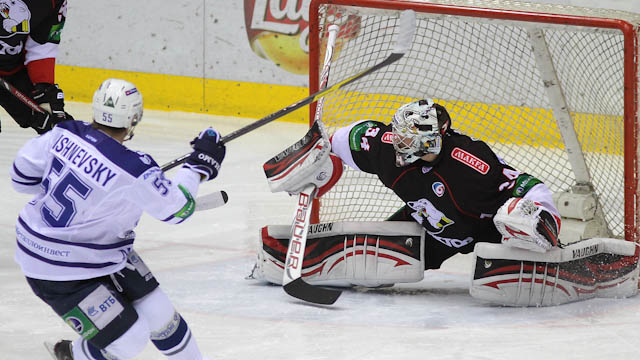 Magnitka was blanked for only the second time this season, stumbling to a 0-2 reverse at home to lowly Vityaz. The goals came in the second period through Vyacheslav Solodukhin and Georgy Berdyukov, while Sergei Denisov made 34 saves.

In Petersburg, SKA lost an absorbing game against Avangard in overtime after a 4-4 tie. The visitor, which brought Milos Riha back to the northern capital for the first time since his dismissal from SKA midway through last season, led 2-0 and 3-1, and seemed to have sealed the win when Alexander Perezhogin made it 4-3 with less than four minutes to play. A dramatic equalizer from Patrick Thoresen with just 15 seconds left forced overtime, but it was Avangard’s Sergei Shirokov who grabbed the winner.

Victory maintains Avangard’s hopes of sneaking into eighth place in the East – the Omsk team currently trails Traktor by two points with three games to play.

Gunfight in the west
The race for the last play-off berth in the Western Conference looks like a three-horse race – and all three contenders picked up wins.

Lokomotiv currently has the edge, and with Dave King behind the bench for the first team the Yaroslavl team defeated Avtomobilist 5-3 despite conceding after just 53 seconds to Alexei Simakov. It got worse in the second session when Andre Deveaux doubled the lead on 23 minutes. But that sparked a Loko fightback; Sergei Konkov picked up a goal and an assist to tie the scores before Geoff Platt made it 3-2 on 34:27. Avto tied it up again early in the third, but Jonas Holos and Yegor Averin paced the home team to the win. 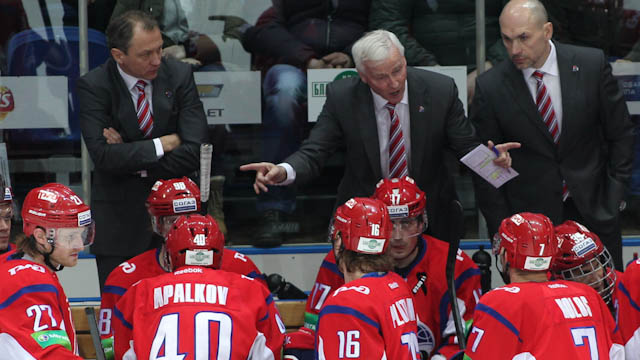 Atlant remains three points behind after a 5-1 win at home to Barys. Igor Radulov and Sergei Shmelyov scored twice to set the Moscow Region team up for a convincing success. 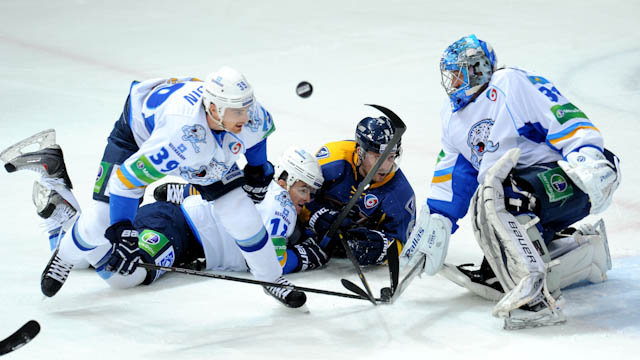 There was a similar story in Cherepovets where Severstal beat Ugra 4-1. Pavel Chernov and Anatoly Nikontsev both struck twice.

Slovan retains a theoretical chance of snatching a play-off spot. But the Slovaks remain eight points adrift after Wednesday’s shoot-out win against Dinamo Minsk and have just three games to make up the difference. Martin Stajnoch broke a 3-3 tie on the night to settle the outcome.

Around the league
Ak Bars was Wednesday’s top scorer, winning the Tatarstan derby 7-3 at home to Neftekhimik. The early stages were tight, with Dmitry Obukhov and Igor Polygalov scoring twice for their respective teams before Alexei Tereshchenko’s power play effort edged Ak Bars ahead. Tereshchenko also got an assist on Kirill Petrov’s game-winner in the second as the home side pulled away.

Ilari Filppula was CSKA’s game winner in a 2-1 success over Moscow rival Spartak. The Finn struck in the 48th minute to break a 1-1 tie in favor of the Army Men. 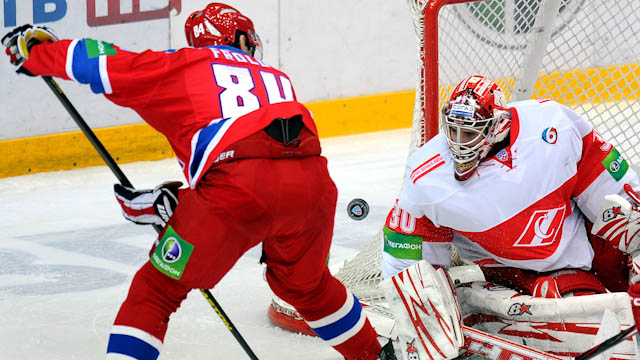 Lev eased to a 4-1 home win over Donbass after two goals in the first five minutes. Justin Azevedo and Topi Jaakola got things in motion early on for the Czechs.

Dinamo Riga recovered from losing an early goal to win 5-1 at home to Medvescak. Marcel Hossa and Roberts Bukarts changed the course of the game in the middle frame after Charles Linglet had opened the scoring in the second minute.