The top of the Western Conference enjoys a cosmopolitan appearance as the regular season draws to a close. Donbass’s win over SKA saw the Donetsk club join Lev Prague in a seeded spot with the play-offs drawing ever closer, while Medvescak and Dinamo Riga continue to push just outside the top four.

Coupled with the strong form of Barys Astana in the East, it looks like this year’s play-offs could see non-Russian teams among the seeds for the first time in the KHL’s history.

Thursday’s results underlined the strength of the ‘foreign legion’. Donbass overpowered second-placed SKA, recording a 4-2 win and clinching the play-off spot which eluded it last season.

The opening two periods were completely contrasting: SKA had much the better of the first, but failed to capitalize on its dominance and went into the interval at 1-1. In the second, though, the Petersburg men mustered just two shots on goal, and Oleg Piganovich’s marker separated the teams. But it wasn’t until midway through the third that the result was clear: Jan Kolar and Ruslan Fedotenko stretched the advantage to 4-1 and SKA’s response from Artemy Panarin was too little, too late.

Meanwhile in Zagreb Medvescak eased to an identical scoreline against Atlant thanks largely to a second-period double from Matt Ellison. He found the target twice in a four-minute burst, assisted by Charles Linglet both times, to snap a 1-1 tie and put the home team in control. Evgeny Artyukhin reduced the deficit, but Bill Thomas quickly reinstated the two-goal cushion to lift Medvescak to within two points of CSKA. 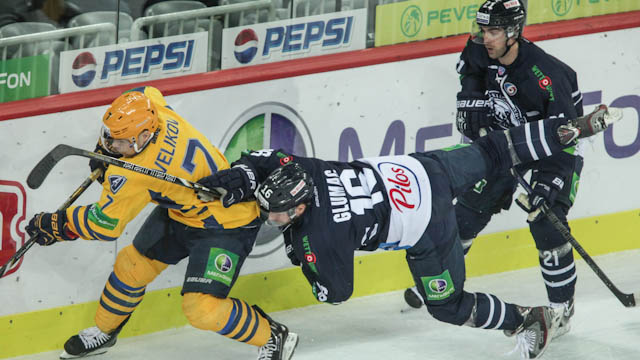 Loko closes in on play-offs
Lokomotiv took another big step towards securing a play-off place, grabbing a 3-1 win over Spartak to stretch its lead over Atlant to nine points.

Spartak took the lead in the first period through Viktor Bobrov, but once again failed to hold on to its advantage. Janis Sprukts tied it up early in the second and Sergei Plotnikov gave Loko the lead on the power play seconds before hooter. An empty-net goal from Yegor Averin confirmed a 14th consecutive loss for the Red-and-Whites, equalling a KHL record for the longest losing streak. 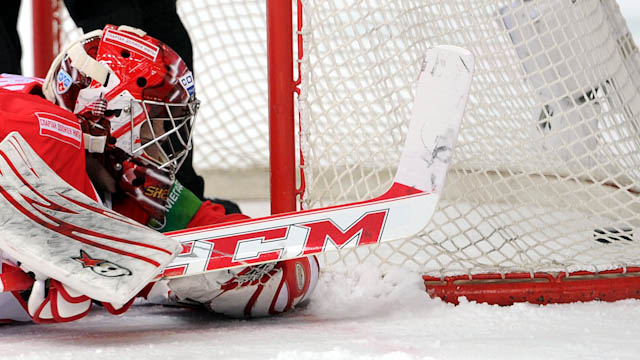 Magnitka holds on in Novokuznetsk
Metallurg Magnitogorsk’s prolific first line did the damage yet again, powering the team to a 4-0 lead in Novokuznetsk before the ‘other’ Metallurg clawed back to 3-4.

The offense trio, Kovar, Zaripov and Mozyakin combined to set up two very similar goals for defenseman Viktor Antipin in the first period, before Kovar found the net himself at the end of the second. Denis Platonov made it four early in the final session, and the task was too great for the home team despite a strong finish which almost snatched an unlikely tie.

All quiet on the Eastern front
Two games in Russia’s Far East produced just two goals between them – and both went to the away teams. In Khabarovsk Salavat Yulaev left it late to take the points against Amur. Alexei Kaigorodov struck in the 57th minute; Andrei Vasilevsky made 24 saves.

In Vladivostok, meanwhile, Admiral’s play-off hopes took a hit following a 1-0 loss to Neftekhimik. Renat Mamashev got the decider in the 14th minute and Alexander Sudnitsin made 36 saves. 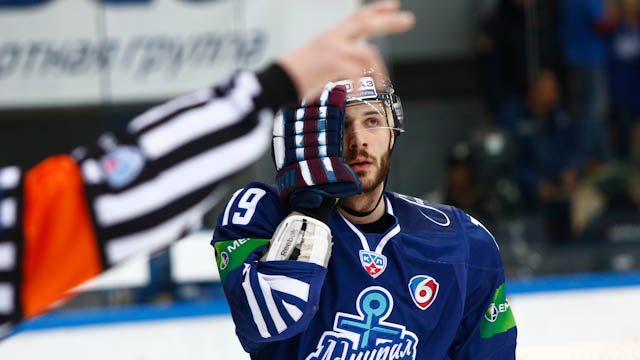 Around the league
Traktor picked up one more point in its bid to snatch a play-off spot, but could not do better than an overtime defeat at Sibir. Jonas Enlund snapped a 2-2 tie just 14 seconds into the extras, leaving Traktor with scant reward for two goals in 15 seconds of the middle session.