The race of the runners-up. January 16 round-up

Avangard and Traktor reached the 2012 and 2013 Gagarin Cup finals respectively, but this season both teams face a struggle to make the play-offs at all. Traktor is currently in eighth in the east, just three points ahead of Avangard, and both teams know there’s little margin for error.

The rivals both picked up home wins on Thursday, with Avangard’s 4-1 success over Spartak followed by a 5-3 win for Traktor against Salavat Yulaev, prolonging the intrigue in this unexpected battle between two of the KHL’s stronger clubs in recent seasons.

Avangard made short work of struggling Spartak, opening up a 2-0 lead in just 13 minutes thanks to Alexander Perezhogin and former Red-and-White favorite Stefan Ruzicka. Perezhogin added a second later on as the visitor succumbed to an 11th consecutive defeat. 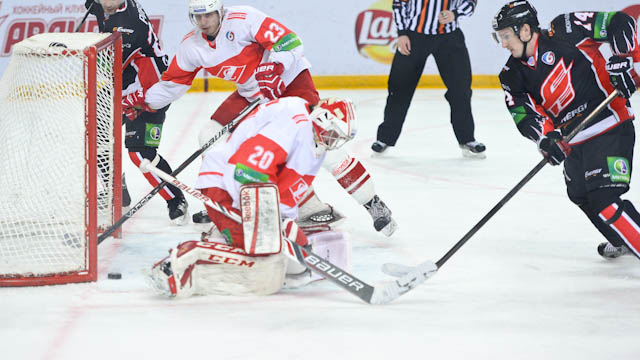 Traktor then faced a more challenging mission against Salavat Yulaev, and trailed 1-3 after Igor Mirnov converted a power play just before halfway. But Alexei Zavarukhin clawed one back before the second interval, and Traktor completed the fightback in the final session thanks to Andrei Kostitsyn and Andrei Popov before an empty-net goal from Zavarukhin wrapped up a 5-3 win. Fans in Chelyabinsk currently have another play-off campaign to look forward to – for the moment… 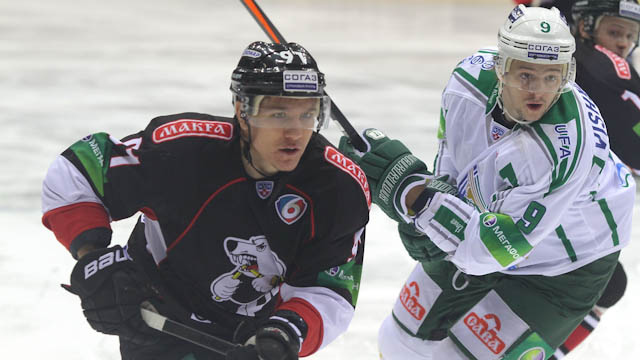 Medvescak downs Barys again
For the second time this season Medvescak found a way to blunt Barys’ potent offense and record a victory which inches the Zagreb team closer to a play-off spot in its debut KHL season.

For half of this encounter in Astana the visitors absorbed the pressure that Barys brought to bear. Then, in the 30th minute Charles Linglet opened the scoring, stunning the home crowd with a freakish goal off the back of goalie Ari Ahonen. Barys cancelled that one out thanks to Roman Starchenko, but Medvescak added two more in the third period through Matt Ellison and Jonathan Cheechoo.

Around the league
Metallurg Magnitogorsk returned to the top of the Eastern Conference with a 5-3 win at Neftekhimik. After falling behind early on, Magnitka turned the game around the second period with goals from Francis Pare, Rinat Ibragimov and Sergei Mozyakin. There was no way back for Neftekhimik, but Dan Sexton did score on his KHL debut.

Jakub Kovar’s fourth shut-out of the season helped Avtomobilist to a 2-0 win over Dinamo Minsk. Alexei Simakov and Anton Lazarev got the goals.

Ugra made it five wins in a row to keep its slim hopes of storming into the play-offs alive. Veli-Matti Savinainen and Artyom Bulyansky both had a goal and an assist to lead their team to a 3-1 success against Donbass.