Metallurg Magnitogorsk’s stay at the top of the Eastern Conference proved to be brief – a shoot-out defeat at home to Salavat Yulaev, combined with Barys beating Spartak saw the Kazakh team seize top spot.

Magnitka made the worst possible start, conceding to Nikita Filatov after just 56 seconds, but rallied to lead 2-1 at the first hooter thanks to a pair from Evgeny Timkin. But Salavat reasserted control in the second session to lead 3-2 before Sergei Mozyakin – inevitably – found the net once again to tie it up in the third. Success in the extras would still have kept the home side on top of the tree, but Alexei Kaigorodov, a former Magnitogorsk player, won the shoot-out for his current club.

Barys, meanwhile, returned to the top and heaped more misery on Spartak in the process. Nigel Dawes led the way with two goals and an assist in a 4-2 win in Astana; Spartak went down to a tenth successive defeat. 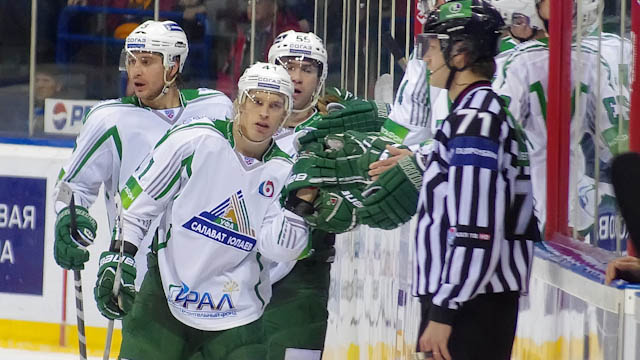 Two points gained, or one point dropped?
Avangard faces a battle to make it into this season’s play-off, and Tuesday’s win over Medvescak left mixed emotions for fans in Omsk. With just nine games left, every point is vital in the battle to overall Admiral and Traktor and claim a top-eight finish, so Sergei Shirokov’s shoot-out winner was obviously something to cheer.

But after racing into a 2-0 lead midway through the first period, thanks to goals from Denis Kulyash and Andrei Ivanov, there remains a lingering frustration at being pegged back to tie 3-3 in regulation. Hugh Jessiman and Matt Murley brought the visitors level in the second period, and after Alexander Perezhogin reinstated Avangard’s lead, Ryan Vesce took the game into overtime. Avangard remains in 10th in the East, three points behind Traktor.

Around the league
Ugra, fresh from defeating Dynamo Moscow in its last game, reignited its play-off prospects with a crushing 6-0 win at home to Dinamo Minsk. Two goals each from Mikhail Zhukov and Nikita Gusev paved the way; Alexei Kuznetsov made 22 saves.

Yegor Milovzorov – he of the famous All-Star carp mask – fished out a victory for Neftekhimik at home to Traktor. He netted twice in the last six minutes after Bogdan Yakimov had cancelled out a Jan Bulis opener.