It’s not often that SKA and Ak Bars go into a game with a whiff of crisis about them, but as the two prepared to meet in Monday’s highlight encounter both sides had cause for concern.

SKA, the hosts, had hit an indifferent run of form dating back to mid-December, while Ak Bars had tasted defeat in its two previous home games, slipping from the top of the Eastern Conference in the process. While many clubs would envy the lofty positions enjoyed by these two, high standards and high expectations mean that both sets of fans had cause for mild disquiet.

In the event SKA dispelled many of their supporters’ worries with a 3-1 win. Alexander Kucheryavenko got the decisive goal with a play worthy of settling any game: closely marked by Alexander Svitov, he wriggled into enough space to turn smartly and fire a low shot past Konstantin Barulin to make it 2-1 in the 35th minute.

Earlier the teams had traded first-period goals through Dmitry Kalinin and Artyom Lukoyanov, and there was a curio to complete the scoring. Ilya Kovalchuk got the third goal, despite being unable to put the puck in the net. Leading a breakaway on an empty net he was fouled by Alexander Burmistrov, and with no goalie on the ice to face a penalty shot the goal was awarded automatically.

The game also saw the first appearance of SKA’s retro-kit, bearing the word ‘Leningrad’, in honor of the 70th anniversary of the end of the Siege of Leningrad (now St. Petersburg) on Jan. 27, 1944. 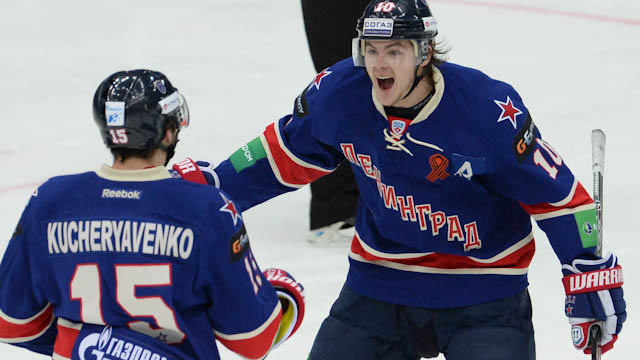 Stana’s steady return
Rastislav Stana made only his second appearance for CSKA since picking up an injury on Nov. 11 and returned to action with a shut-out in his team’s 3-0 win over Amur.

The Slovak stopper made 27 saves as his team eased to a straightforward home win. Goals from Fyodor Fyodorov, Alexander Frolov and Stanislav Yegorshev gave the Muscovites the points. 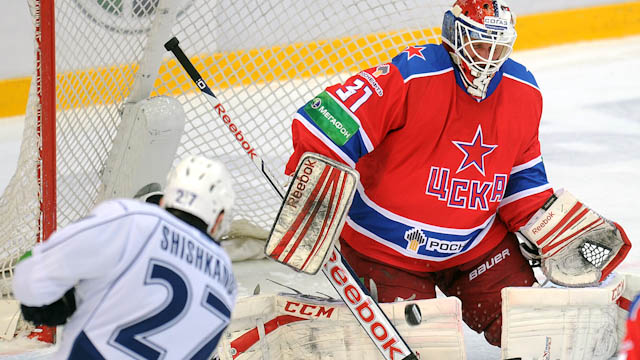 Admiral boosts play-off prospects
Admiral’s play-off hopes got a big boost with a 5-2 win at Dinamo Riga, lifting the Vladivostok team to within one point of the top eight.

Justin Hodgman scored twice to lead his team to victory and make it four goals in seven games. Having previously played for Metallurg Magnitogorsk and Torpedo this season, it seems that the Canadian has finally found a team to suit him.

Dinamo’s Kristaps Sotnieks also scored twice late on, but the game was long gone by that stage.

Around the league
Torpedo edged Atlant by the odd goal in nine at Mytishchi, despite trailing 2-0 at the first interval. Roman Lyuduchin put the visitors ahead for the first time in the 35th minute, but it took further goals from Finnish forwards Sakari Salminen and Jarkko Immonen to put the game beyond reach. Igor Radulov completed a hat-trick six seconds from time, but still finished on the losing side. 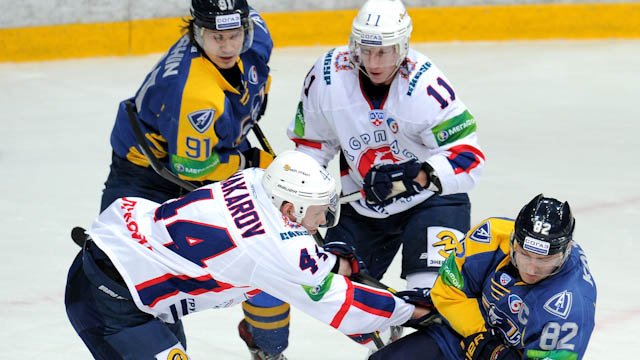 There was a tight one-goal victory at Lokomotiv as well, but here Geoff Platt’s powerplay goal was the only score of the night. Curtis Sanford still had a relatively quiet evening for his shut out – Vityaz managed just 12 shots on goal in the game.

Lev left it late to stave off defeat against bottom club Metallurg Novokuznetsk, clawing back a 0-2 deficit in the last five minutes. Petr Vrana and Jiri Sekac took the game to a shoot-out where David Ullstrom finished the job.

There was a similar story in Bratislava, where Sibir tied it up at 1-1 against Slovan in the 57th minute thanks to Oleg Gubin. The shoot-out went the way of the host with Michal Vondrka getting the decisive goal.