The traditional jamboree that is the KHL’s All-Star game delighted fans in Bratislava with another high-scoring, entertaining clash between East and West.
As the contest returned to the West after making its first foray into the orient at Chelyabinsk a year ago, so the final outcome also favored the occident, ending in a 18-16 win for the home team.
The West took an early 3-0 lead – Jonathan Cheechoo’s close-range stick-handling providing the pick of the early goals – and the East never managed to overhaul the deficit. 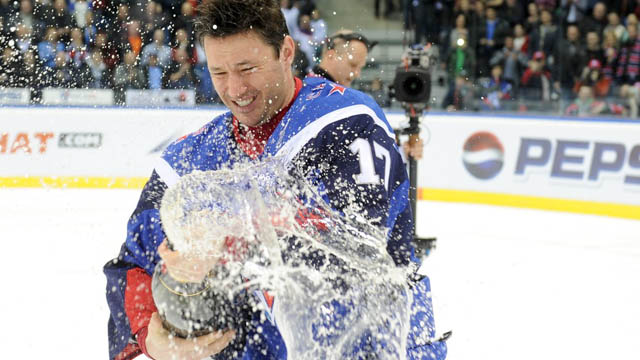 As always, though, the event was more about entertainment than competition: defensemen kept a tactful distance to allow the forwards to strut their stuff, and the Bratislava crowd was particularly keen to see some of its local Slovan heroes impress. So there was special delight at Miroslav Satan’s last-minute empty net goal to add to his two assists. Slovan’s Milan Bartovic also found the net, while Slovak international Marcel Hossa, of Dinamo Riga, scored twice.
Unusually for an all-star game, nobody got a hat-trick. Along with Hossa, there were doubles for Denis Denisov (CSKA) and Leo Komarov (Dynamo Moscow) of Team West and Denis Parshin (Torpedo), Sergei Mozyakin (Magnitka), Jori Lehtera (Sibir) and Brandon Bochenski (Barys) for Team East. Parshin came closest to a treble, but failed to take his chance with a penalty shot moments after his second goal.
While the cramped format of this year’s All-Star event – the key action crammed into a single day to fit into a congested Olympic season – made it hard for the League’s officials to arrange the grand show, the happiness seen all over the packed stands of the Slavnaft Arena confirmed that once again the mid-season showcase was a resounding triumph.
Speed, Moonwalks … and a giant fish
Earlier in the evening, the traditional skills challenge got off to a blistering start with local hero Milan Bartovic of Slovan making the most of home advantage to set a new record time of 13.48 sec, delighting the Slovak crowd. 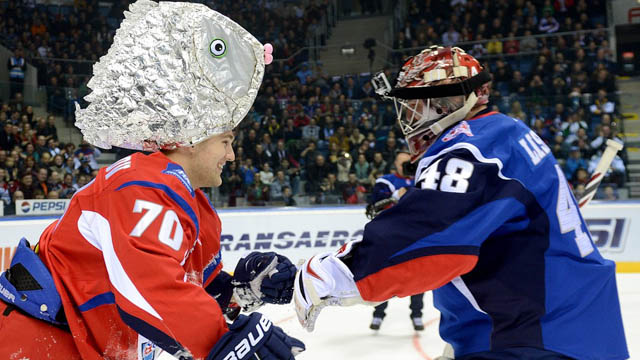 The contest ultimately went the way of the West, winning the speed skating, the goalies’ contest, the accuracy test and the second relay to claim a 4-3 verdict. Meanwhile the penalty shoot-out was enlivened by some unusual headgear – a giant fish modelled by Neftekhimik’s Yegor Milovzorov and a tank commander’s helmet for Avtomobilist’s Fyodor Malykhin took pride of place on this icy catwalk. Ak Bars goalie Konstantin Barulin found a way to rival last year’s star turn as a figure skater, ripping off his game jersey to reveal a muscle-bound super-hero t-shirt. 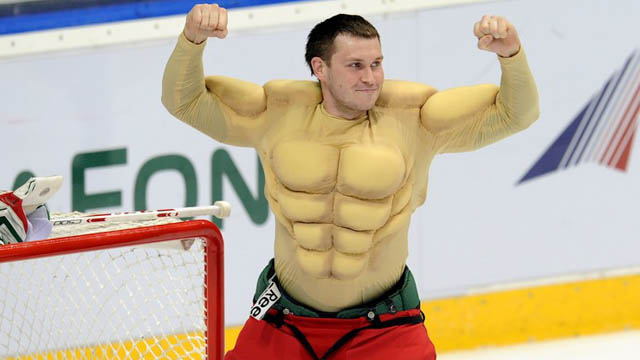 However not even a superman could stop Miroslav Satan’s subsequent shot.
Finally, young CSKA forward Nikolai Prokhorkin displayed some nifty footwork at the end of the decisive relay: after successfully anchoring the West’s dash, he channelled the spirit of Michael Jackson to celebrate with a Moonwalk on ice and set the scene for the night’s main attraction. 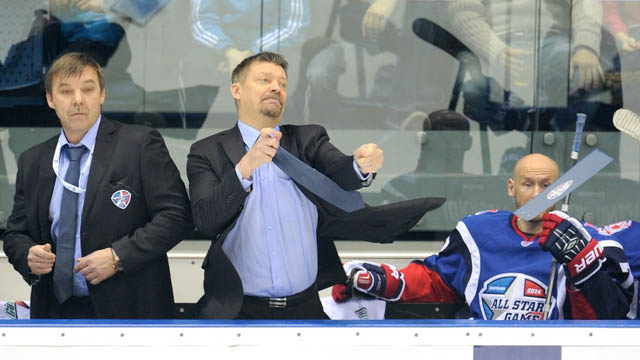 A new feature this year was a coaches’ competition, in which the bosses were handed the familiar task of throwing a tactic board on the ice, and the farthest throw belonged to SKA Saint Petersburg chief, Jukka Jalonen.