Dynamo Moscow’s winning run came to an abrupt halt at home to lowly Ugra. Although the visitor gave up a 2-0 lead, Nikita Gusev kept his nerve to snatch a shoot-out win following a 2-2 tie. Dynamo thus tasted defeat for the first time in 11 games, but remains comfortably ahead of the chasing pack in the league table.

Ugra had threatened a shock much earlier, opening up a 2-0 lead on the defending champion in regulation. Mikhail Zhukov opened the scoring in the eighth minute and Artyom Bulyansky’s penalty shot doubled the advantage early in the second – as well as giving a foretaste of Bulyansky’s later success in the first shot of the shoot-out.

But Dynamo doesn’t lack for confidence during its winning run. Martins Karsums reduced the deficit and Sergei Soin tied it up with 24 seconds to go in the middle session. Both sides had chances in the last, but nobody could find a winner and so it went on to a shoot-out. 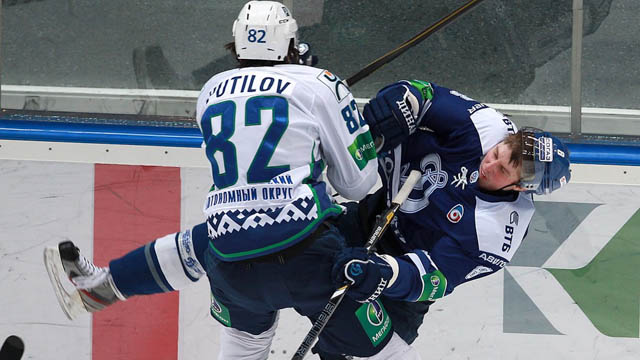 SKA still struggling
Another day, another defeat for SKA – the Western Conference high-flier slumped to its seventh loss in nine outings after a 4-0 flop at Sibir.

The home team did the damage early in the second, with Dmitry Kugryshev and Alexei Kopeikin opening up a two-goal cushion. At the other end, Nikita Bespalov was on top form, making 33 saves for a shut-out in only his second KHL game of the season, while two late goals from Jori Lehtera completed the scoring.

Mozyakin shoots Magntika to the top
Metallurg Magnitogorsk climbed to the top of the Eastern Conference thanks to a 3-1 win at home to CSKA. The KHL’s leading scorer Sergei Mozyakin took his tally to 26 goals (and 59 points) as he scored twice to put Magnitka in control.

He opened the scoring off a Danis Zaripov pass on 14 minutes and rifled home a wrist shot to make it 2-0 shortly after the interval. Sergei Tereshchenko extended the lead before Alexander Radulov got one back late on for CSKA.

Riga’s comeback delight
Dinamo Riga boosted its hopes of a top-four finish in the west with a comeback win at Traktor. Andrei Popov and Jan Bulis put the home team in control in the first period, but that all changed after the interval. Vitalijs Pavlovs and Marcel Hossa tied it up with two goals in two minutes before Krisjanis Redlihs gave Dinamo the lead in the 37th.

Marcel Hascak and Paul Szczechura completed the scoring in the final session as defeat leaves last season’s runner-up facing a battle to secure a play-off spot this time around.

Around the league
Seven crazy minutes decided the outcome of clash between play-off chasing Admiral and Atlant. Between the 25th and 32nd minutes Felix Schutz put Admiral 2-0 up, only for Atlant to battle back and grab the lead through Alexei Mikhnov. It finished 3-2, leaving both teams in ninth place in their respective conferences.

Seven was also the magic number for Torpedo as it skated to a 7-2 thrashing of Barys. Wojtek Wolski (1+2) led the scoring while Vadim Krasnoslobodtsev got three assists against his former club.

Nikita Filatov was the game-winner as Salavat Yulaev left it late to see off Slovan. Filatov had already scored once when he coolly converted a 55th-minute penalty shot to put his team 3-2 in front. Antti Pihlstrom found the empty net to seal a 4-2 victory. 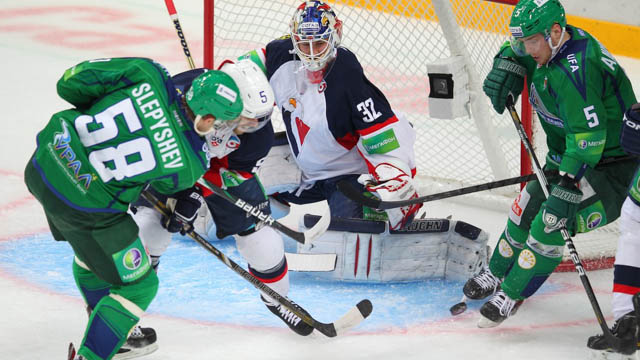 Lev cruised to a 4-1 victory at Neftekhimik. The Czech team had four different goalscorers and eight separate players claimed assists in an impressive team display; Martin Thornberg’s goal early in the second period proved to be the winner.

Avtomobilist kept on motoring towards a play-off spot with a 3-1 win at Vityaz. Igor Yemeleyev got the decisive goal on the penalty kill shortly after halfway.

Geoff Platt’s 39th-minute goal was enough to give Lokomotiv a 2-1 win at Metallurg Novokuznetsk. Earlier Daniil Apalkov had cancelled out Damir Zhafyarov’s opener for the home team.

Anatoly Nikontsev produced a game-winning performance for Severstal at Amur. He got an assist on Vadim Berdnikov’s opener then added two goals of his own as the visitor won 3-1.