Ten out of ten. January 7 round-up

Western Conference leader Dynamo Moscow made it 10 wins in a row thanks to a starring performance from Konstantin Volkov. He delivered 2+1 in a 3-2 win over Avtomobilist.

Volkov’s first contribution was an assist as Denis Mosalyov wiped out Artyom Chernov’s fourth-minute opener. Then he put Dynamo ahead in the 26th minute and got the game winner 30 seconds into the final period, with Dominik Granak getting his second assist of the game. 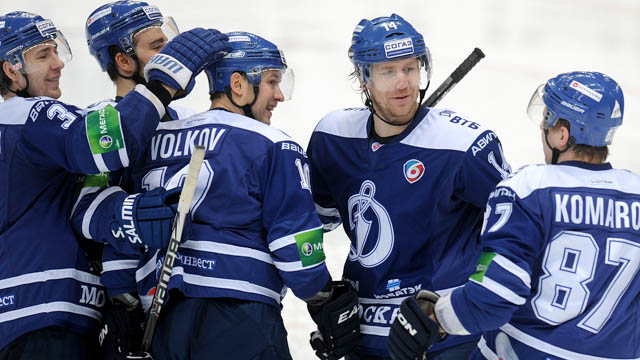 Barys triumphs in the battle of the East
Barys edged a 2-1 verdict at Ak Bars to make it four wins in its last four visits to Kazan and close the gap at the top of the Eastern Conference to a single point.

Nik Antropov was the game-winner, forcing home the puck from close range after Zak Hamill twice rapped Emil Garipov’s pads after he broke out from behind the goal.

Ari Ahonen then held firm in the Barys goal, making 19 saves in the third period to protect that slender advantage. Earlier Mikhail Rakhmanov had seen his third-minute goal cancelled out by Tim Stapleton.

SKA shocked in Novokuznetsk
Metallurg Novokuznetsk fans have not had much to cheer this season, but the club’s first home win in a month was the perfect gift to mark the Russian Orthodox Christmas.

Metallurg, languishing at the foot of the KHL table, stunned SKA, beating the Western Conference high-flyers 3-2 to set a joyful wave rolling around the arena for the first time since December 8.

The winner came on 47:37 as Kurtis McLean reacted first to the rebound from a Sergei Yemelin shot, and the victory was no freak result. Metallurg outshot its illustrious rival 37-27, and led twice in the earlier stages before McLean settled the outcome. Artyom Gareyev and Yegor Martynov were the other home heroes, while Artemy Panarin and Maxim Chudinov found the net for SKA.

While the triumph was a rare delight for the home team, SKA has become all too familiar with setbacks recently: Tuesday’s loss was its sixth in the last eight games.

Traktor’s Petri Kontiola led the way, firing home a hat-trick as his team beat CSKA 3-1 in Chelyabinsk to strengthen its play-off push. Kontiola scored twice in the first period, then added an empty-netter to complete his first KHL treble in his fifth season in the competition. Oleg Saprykin got CSKA’s consolation. 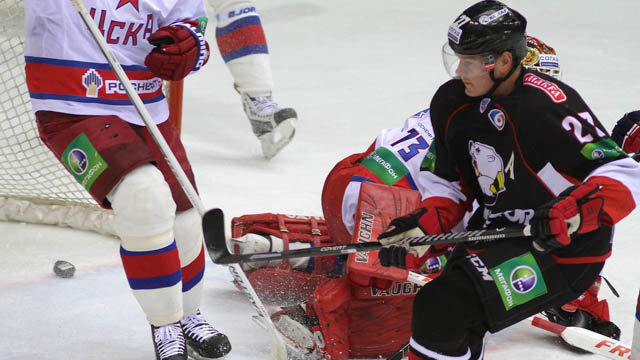 In Novosibirsk Jori Lehtera celebrated his call-up to Finland’s Olympic roster by getting the game-winner as Sibir beat Lokomotiv 3-1. He scored in the 31th minute off a Dmitry Monya pass; Monya completed the scoring in the last minute.

Goals in the Urals
The biggest wins of the day came in the Ural region, but while home fans were delighted with Metallurg Magnitogorsk’s 6-2 thrashing of Dinamo Riga, Salavat Yulaev was stunned with a 1-5 reverse at home to Lev.

Dinamo was competitive in the first period, clawing back an early 2-0 deficit to go into the first interval with the scores level. But after that Magnitka’s prolific offense stepped up a gear. Viktor Antipin made it 3-2 seconds after the restart, and the ever-reliable troika of Sergei Mozyakin, Jan Kovar and Danis Zaripov each found the net to complete the scoring.

Jiri Novotny, another player called up for the Olympics, got Lev’s game-winner in Ufa. Fellow Olympian Antti Pihlstrom got one back for Salavat, but the game got away from the home team in the final session as Ondrej Nemec, Jiri Sekac and Patrick Zackrisson ensured the goalie Vladimir Sokhatsky’s evening ended early.

Around the league
Miroslav Satan scored twice in a losing cause as Slovan went down 4-3 in overtime at Neftekhimik. Igor Polygalov settled the issue on 61:30, leaving the visitors beaten despite a second-period recovery that took Slovan from 0-2 to 3-2.

Denis Parshin led the way as Torpedo recovered to beat Avangard 5-3. He tied it up at 3-3 on 35 minutes, then got an assist on Maxim Potapov’s game-winner before adding an empty-net goal to round things off.

Admiral picked up another comfortable win, downing Severstal 4-1 in Vladivostok. Artyom Zemchyonok and Justin Hodgman gave the hosts an early advantage that was never relinquished.

Alexander Yunkov twice gave Amur the lead at home to Atlant, but still ended up losing out after Maxim Mayorov won it for the visitor in a shoot-out following a 2-2 tie.