Eastern Conference leader Ak Bars went down to a surprise defeat at home to Avtomobilist. A hat-trick from Igor Yemeleyev did the damage, lifting the Yekaterinburg team to a 3-1 success. The much-travelled forward was the spearhead of Avto’s counter-attacking game, scoring twice in the second period to put his team in control.

Stung into action, Ak Bars piled the pressure on Jakub Kovar’s goal, only to be caught out once again when Yemeleyev grabbed a short-handed goal with seven minutes to play. Janne Pesonen clawed one back, but the deficit was too great. 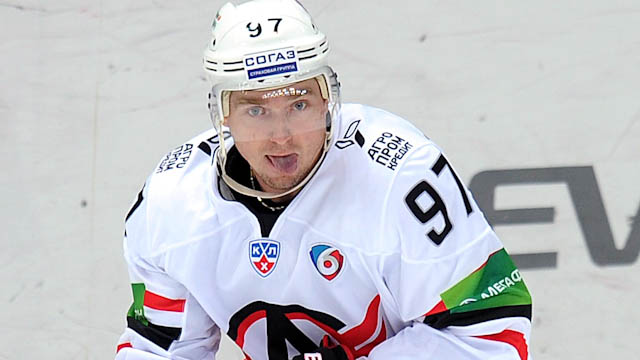 The teams had shared a 2-2 tie and Barys had rattled Dynamo’s crossbar in overtime before Marek Kvapil popped up on the powerplay to snatch victory with just 26 seconds left to play. He fired home from the left-hand face-off spot after Dominik Granak’s pass picked him out.

Despite dominating the first session, the Blue-and-Whites could not find a way past Vitaly Yeremeyev as he returned to face his former club. Maxim Pestushko’s short-handed goal eventually opened the scoring in the 27th minute, but two goals in the space of a minute saw Dustin Boyd and Talgat Zhailauov put Barys ahead. That lead lasted until the 57th minute when Dmitry Pestunov made it 2-2 and forced overtime. In the added minutes Zhailauov rattled the home piping before Dynamo got that decisive powerplay and claimed the win. 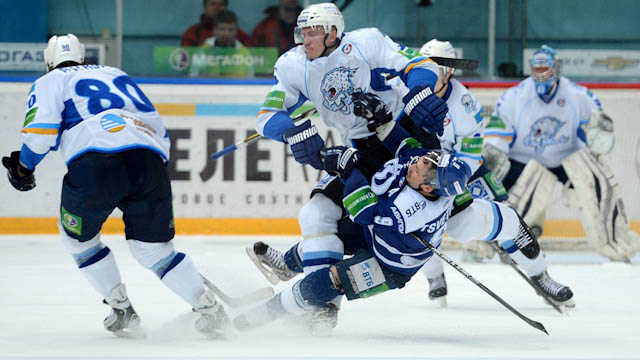 SKA hit six
SKA produced the perfect tonic after a period of poor form either side of New Year, handing Amur a 6-1 drubbing on its own ice.

Artemy Panarin led the scoring with three goals, while Ilya Kovalchuk had two assists in a powerful display by SKA’s offense. The first of Panarin’s goals, in the 15th minute, made it 3-1 and effectively ended the contest as it cut off the lifeline Amur had sought following Alexander Yunkov’s marker on 11:56.

CSKA overwhelmed by Ufa fightback
Salavat Yulaev proved too strong for CSKA, even though the visitor led twice when the teams met in Ufa. Denis Denisov and Alexander Radulov ensured the Army Men enjoyed the early advantage, but after the midway point the game tipped decisively in the home team’s favour. Andrei Zubarev tied it up then got an assist on Igor Mirnov’s go-ahead goal in the 37th minute. Denis Khlystov added two more in the third to make the final score 5-2.

Around the league
Marcel Hossa gave Dinamo Riga its first win since December 14 and pushed the Latvian team back into the top four in the Western Conference. He earned a 1-1 tie at Neftekhimik before grabbing the overtime winner.

Metallurg Magnitogorsk battled back to edge Lev 4-2. Calle Ridderwall twice gave the Czechs the lead, but third-period goals from Tim Brent and Rinat Ibragimov turned the game around. Sergei Mozyakin grabbed an empty-net goal to settle the outcome.

Admiral’s young goalie Evgeny Ivannikov added to his burgeoning reputation with another shut-out. This time Lokomotiv was the victim in his team’s 3-0 win. Justin Hodgman’s short-handed goal in the second opened the scoring; Niclas Bergfors and Richard Gynge wrapped it up.

Avangard took a shoot-out win at Vityaz through Sergei Shirokov. Earlier the Omsk team had led twice in a 2-2 tie. 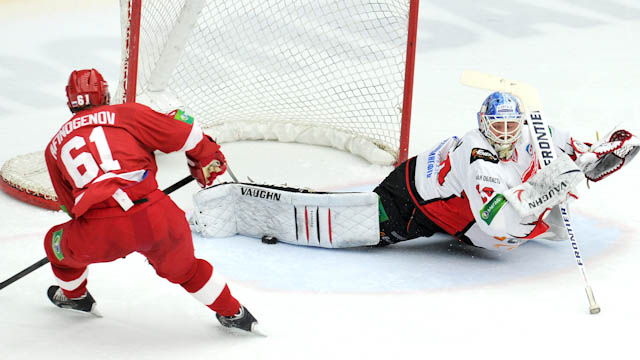 Artyom Bulyansky broke a 4-4 tie to hand Ugra a high-scoring victory at Torpedo. He struck midway through the third period. Earlier Veli-Matti Savinainen had scored two for the visitor.

Linus Videll was Severstal’s hero after steering his team to a shoot-out win at Metallurg Novokuznetsk. Videll tied the game at 1-1 in the 50th minute and went on to get the decider.

A pair of second-period goals took Traktor past Slovan. Igor Valeyev and Alexei Zavarukhin gave the home team an unassailable advantage before Branko Radivojevic pulled one back for the Slovaks.

All the scoring came in the third period as Sibir downed Atlant 3-1. Dmitry Monya and Oleg Gubin put the home team 2-0 ahead before Rafael Batyrshin got Atlant back in contention with two minutes to play. Alexei Kopeikin’s empty netter confirmed Sibir’s superiority. 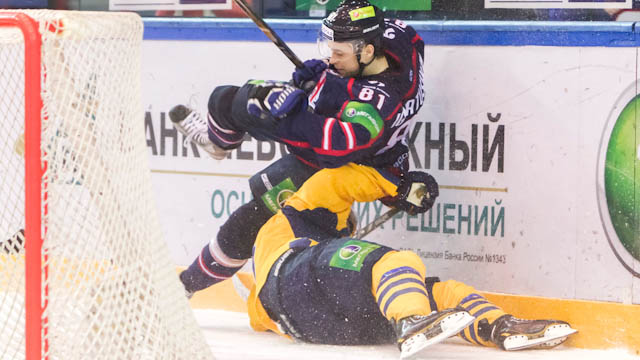