Salavat Yulaev silenced SKA’s offense for much of Saturday’s big game in St. Petersburg, and that was enough to secure a 2-1 victory.

The home side struggled to create opportunities in the first two periods, managing just 16 shots at Vladimir Sokhatsky’s goal and failing to score. At the other end, the men from Ufa were more productive, with Igor Mirnov and Alexei Kaigorodov scoring in the second period to put the visitor in charge.

SKA improved in the final session, and came close to forcing overtime. First Dmitry Kalinin pulled one back with two minutes to play, then the video officials were called into action to judge whether the home team had managed a second goal. After due consideration they ruled that the puck had not fully crossed the line and Salavat held on to condemn SKA to a fourth defeat in five games. 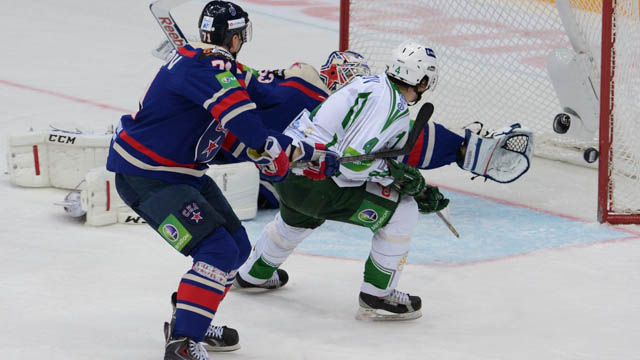 Barys thrashes Amur
Brandon Bochenski’s hot streak continued with 2+3 in Barys’ 8-2 win at home to Amur. The American, who scored a hat-trick in his previous game, wrapped up 2013 in fine style to lead the way for his team.

Bochenski isn’t the only Barys man to enjoy a successful year: team-mate Nigel Dawes concluded his 2013 with a hat-trick, finding the net in each period. The Kazakh team heads into 2014 in second place in the Eastern Conference, comfortably its strongest position since coming into the KHL.

Avangard ends the year on a high
Avangard began the season in dreadful form, but the Omsk team has finished 2013 in fine shape. A 4-1 success over Admiral made it five wins in a row and strengthened Milos Riha’s team’s grip on a play-off spot. Alexander Perezhogin led the way with two goals in a game where Avangard always looked comfortable.

For Admiral, meanwhile, a bright start to the season is beginning to fade. While victory today would have put the newcomer from Vladivostok right back into the play-off frame, the team now lies in 10th place, five points adrift of the qualifying line. 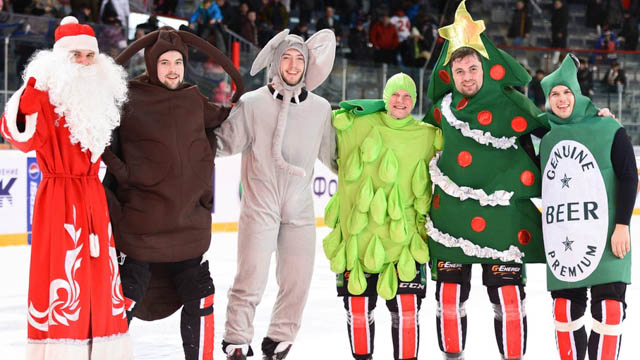 Around the league
Dinamo Riga missed the chance to climb to third in the Western Conference after a shoot-out defeat at home to Lev. It looked like Marcel Hossa’s second period goal would be enough to win it for the Latvians, but Ondrej Nemec made it 1-1 with less than two minutes left. Overtime couldn’t settle the outcome, but Jakub Klepis claimed the winner in the shoot-out.

Avtomobilist climbed to fifth in the Eastern Conference with a 2-0 win over Metallurg Novokuznetsk. Jakub Kovar recorded his third KHL shut-out, making 23 saves in the process, while Fyodor Malykhin got both goals.

Ugra picked up a rare win, seeing off Sibir 2-1. Veli-Matti Savinainen got the game winner in the 56th minute.