Resolute defense and clinical finishing saw Dynamo Moscow breeze past Medvescak in Zagreb. The home side had come within a minute of a massive shock when it visited Moscow earlier this year, but there was to be no danger of a repeat once Maxim Karpov set the Blue-and-Whites on their way to a 5-0 victory in the third minute.

Medvescak, usually so dangerous at home, found it difficult to impose its attacking game against a Dynamo back line which welcomed back Filip Novak (pictured) for his first appearance in more than two months. He marked his return with an assist on Alexander Ryazantsev’s goal, but found himself in the penalty box as Denis Mosalyov scored the best goal of the night. With his team shorthanded he collected a Maxim Pestushko pass in his own zone and embarked on a dazzling solo run, bamboozling two defensemen before beating Barry Brust.

After that display of individual flair, Dynamo also produced a terrific team goal in the second period. Slick passing from Yury Babenko and Alexei Tsvetkov found Konstantin Glazachev all alone to score on the exposed Mark Dekanich. Pestushko completed the scoring in the closing minutes, while Alexander Yeryomenko had 34 saves for his shut-out. 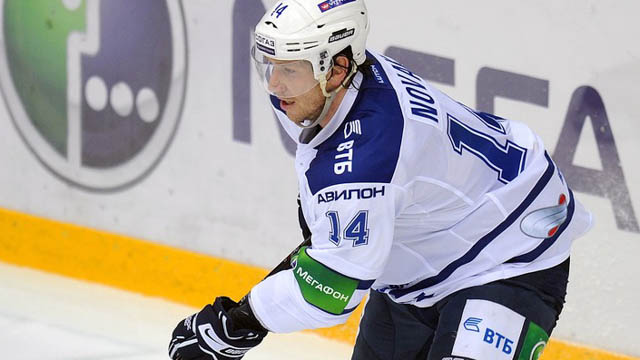 Magnitka wins big again
Metallurg Magnitogorsk followed up Wednesday’s 6-1 win at Spartak with a 4-0 triumph at Severstal – but the game was closer than the scoreline suggests.

Magnitka took an early lead through Evgeny Timkin, but Severstal fought hard and it remained a one-goal game until the 55th minute. Finally, though, the home team crumbled. Francis Pare added to his two goals against Spartak before Sergei Tereshchenko and Oskar Osala completed the scoring. Vasily Koshechkin made 29 saves.

Ak Bars battles to win
AK Bars had to work hard to see off Dinamo Minsk in Belarus. The Eastern Conference leader made an ideal start, with former Dinamo favourite Tim Stapleton getting an assist on Alexander Burmistrov’s opener. But even though the visitor had the edge in terms of shots on goal it struggled to put the game beyond reach. Even after Dmitry Obukhov made it 2-0 in the 46th minute Dinamo managed an almost instant reply through Sergei Drozd. Ak Bars then withstood a 5v3 powerplay to hang on for a narrow win.
Around the league
Lokomotiv condemned Traktor to a second shoot-out defeat in successive games after the teams failed to find a goal in Yaroslavl. Vitaly Kolesnik pulled off 27 saves in the game and kept Traktor at bay in the shoot-out; Michael Garnett’s 31 saves could not help him against Emil Garipov’s penalty shot, a back-hander which ripped into the roof of the net. 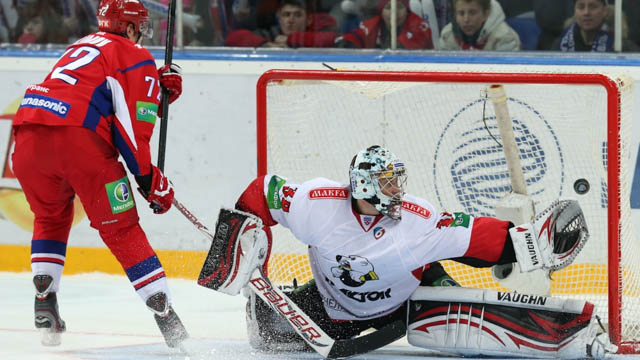 There was another shoot-out after Vityaz and Spartak tied 3-3, and once again it went to the home team. Vyacheslav Solodukhin gave Vityaz the verdict after Oleg Kvasha’s third-period goal for Spartak forced overtime. 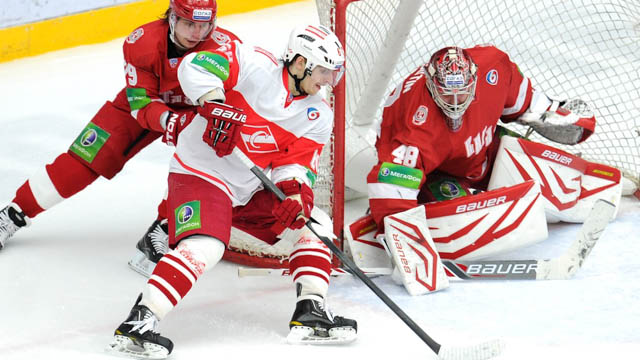 Donbass played out a 2-2 tie for the second game running – but this time the shoot-out went against the Donetsk team. Torpedo’s Wojtek Wolski finally settled it with the 16th post-game shot; earlier Vladimir Galuzin scored twice for Torpedo.

Spengler Cup – Fedorov’s return
Legendary forward Sergei Fedorov got back on the ice after an 18-month absence as CSKA began its Spengler Cup campaign with a 4-3 win over AHL outfit Rochester. Fedorov, now CSKA’s general manager, made himself available for selection following an injury crisis at the club earlier this season but didn’t make a KHL appearance. However, he resumed his familiar offensive duties, centering a line with Oleg Saprykin and Ilari Filppula at the tournament in Switzerland. Igor Girgorenko scored twice to lead CSKA to the win.
#Round-up
Share
Прямая ссылка на материал