Avangard reached the play-off places after completing a fourth win a row – but fans in Omsk had a nervous evening before Amur went down to a 2-3 loss.

Although the home side comfortably outshot its opponent, Amur twice tied the game up before Maxim Goncharov’s powerplay goal early in the third proved decisive. The defenseman broke out from behind his own goal, exchanged passes with Sergei Shirokov and lifted his shot into the top corner to settle the outcome.

Avangard now lies in eighth place, one point ahead of Traktor but having played three games more. 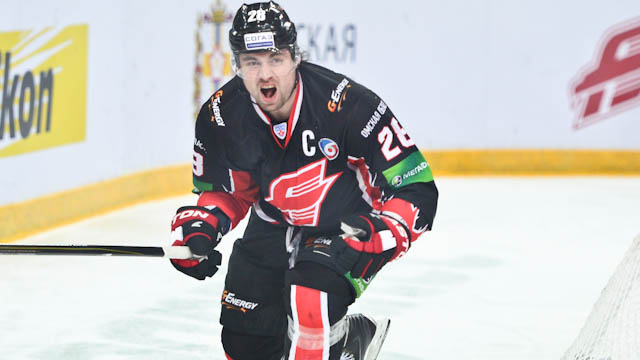 Bochenski blasts Barys to victory
Brandon Bochenski hit a hat-trick to lead Barys to a 6-3 verdict at home to Admiral. The American hot-shot had a hand in his team’s first four goals on the night, starting with a well-worked breakaway on the penalty kill midway through the first period and taking in an assist on a Nigel Dawes goal as Barys opened up a 4-2 lead before the second interval.

Admiral, playing its first game since the departure of captain and leading scorer Enver Lisin to CSKA, battled hard and two goals from Felix Schutz kept the Vladivostok team in the hunt, but nothing was going to take the shine off Bochenski’s day.

Salavat sinks Atlant
Two goal flurries in the second period saw Salavat Yulaev ease to a 5-2 win away to Atlant. After a scoreless opener, Teemu Hartikainen and Sergei Zinovyev scored in the space of two minutes to put the visitor in charge. Atlant hit back through Alexander Kadeikin just after midway, but that prompted another double burst from Salavat with Hartikainen on target once again. Nikita Filatov and Alexei Mikhnov traded goals in the final stanza. 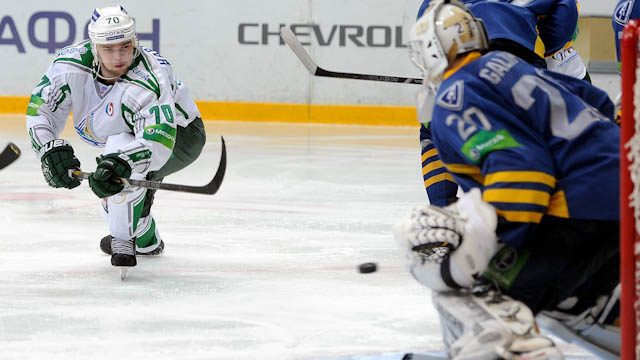 Around the league
Avtomobilist goalie Jakub Kovar produced a top-class display to see his team to a shoot-out victory over Sibir. Kovar made 31 saves in a 0-0 tie, then denied Oleg Gubin and Jori Lehtera in the shoot-out. Vasily Streltsov gave Avto the win.

Metalurg Novokuznetsk powered to a 6-1 win at Ugra. Mark Skutar’s 1+3 led the scoring for the visitor.