Special brewing of the All-Star Baltika 3

While this new brew conforms to the recipe and manufacture of the famous Baltika 3 beer on general sale, the manufacture takes place in Baltika’s unique microbrewery, designed to produce experimental and limited-edition varieties of the amber nectar, and the guests were shown how the special ingredients were blended together to create the All-Star Game’s exclusive beverage.

The specialist brewers shared their expertise with their distinguished guests, taking them through every stage in the making of a beer, from sourcing the ingredients to maturing and bottling the finished article. Having undergone some short, on-the-job training, the dignitaries were allowed to take turns to first pour ground malted barley down into the mixing vat, and finally add in the hops which give the classic beer, Baltika 3, its distinctive taste and aroma.

Baltika became an official partner of the Kontinental Hockey League in 2012 and the exclusively-brewed limited edition series of Baltika 3 is dedicated to the KHL All-Star Game, with the aim of strengthening cooperation in promoting a culture of responsible consumption of beer among fans of hockey. 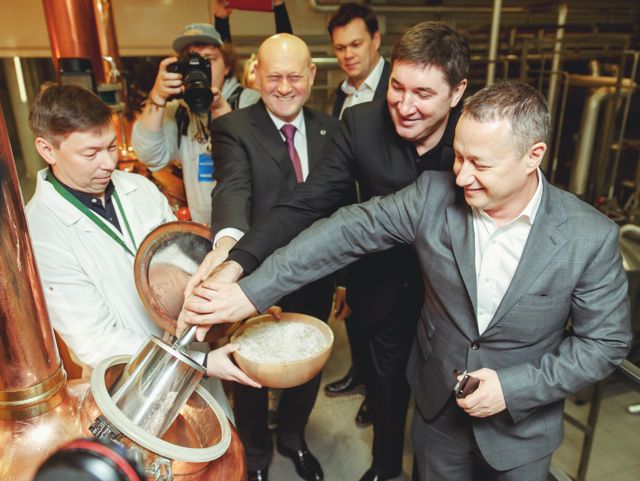 This commemorative beer is truly exclusive, made as a memorable gift for the brewers, fans and partners of the KHL and the Baltika brewing company; it will not be put on general sale.

“It was very interesting for me to play a part in the brewing of this limited-edition series of Baltika 3, dedicated to the All-Star Game,” Ilya Kochevrin said of the experience. “I've seen how the creation of a beer is a complex process, combining strict procedures, technology and natural ingredients of the highest quality."

“It was a pleasure to take part in brewing the fans’ traditional drink,” added Alexander Kozhevnikov. “I hope this beer will be the ideal gift to those celebrating the success of our players in the All-Star Game.”

“Our classic Baltika 3 blend has won a multitude of Russian and international awards, including the prestigious Product of the Year on fifteen occasions," said Isaac Sheps. “We believe our limited-edition Baltika 3, brewed in the presence of the renowned hockey player, Alexander Kozhevnikov, and KHL-Marketing’s general director, Ilya Kochevrin, serves as a symbol of the high quality of our beer. Watching a sporting contest as good as the KHL All-Star Game with a beer as good as ours – that is the comfortable and civilized way to relax.”