It all went wrong in the second period as the visitor scored five times from 10 shots on goal to build a commanding lead. A triple whammy in the space of just 70 seconds saw Michal Sersen, Michal Vondrka and Libor Hudacek wipe out Oleg Saprykin’s early marker for the home team. A goaltending error from Ilya Proskuryakov gave Branko Radivojevic a simple task to make it 4-1 and Vladimir Mihalik got the fifth just before the hooter.

There were some bright spots for CSKA – Nikita Zaitsev scored twice on the powerplay, and Alexander Frolov made it 4-5 with five minutes left, proving there was still some fight in John Torchetti’s team. But the damage from the second session was too much, and the points were headed for Bratislava. 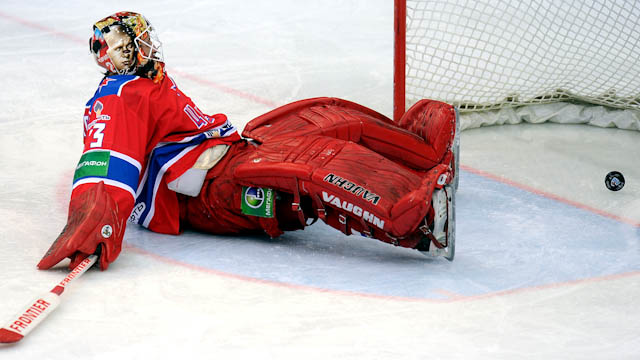 Moscow wins dynamic duel
Dynamo Moscow maintained its position on top of the league table with a 4-2 win at Dinamo Minsk. The defending champion took a 1-0 lead into the first interval thanks to a rare goal from young defenseman Denis Barantsev, but it was the second session which decided the outcome.

Leo Komarov and Maxim Karpov scored twice in the space of two minutes to put the visitor in command, and even though Alexander Materukhin pulled on back with a penalty shot Konstantin Gorovikov reinstated a three-goal cushion in the 40th minute. The Belarusians scored early in the third through Andrei Stas, but it wasn’t enough to stop their Moscow namesakes easing to a fifth successive win.

Koshechkin the unbeatable
For the second game running Metallurg Magnitogorsk goalie Vasily Koshechkin produced a shut-out in the face of heavy fire. After spiking SKA’s guns on Wednesday, he pulled off 41 saves to deny Atlant.

At the other end it took just one goal to decide the outcome, with Chris Lee doing the honors in the last minute of the second period as he fired home a wrist shot from in front of the net. That also confirmed the pre-game prophecy on the video cube, which identified Magnitka’s first line as by far the strongest link on Mike Keenan’s roster. But identifying the threat proved easier than neutralizing it, and Metallurg took the points. 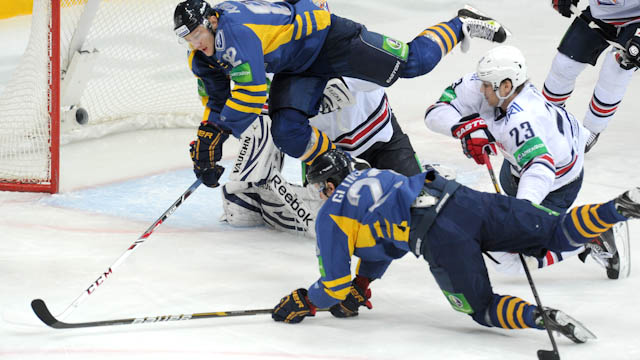 Ak Bars back on top
A 2-1 win at Spartak, coupled with a surprise home defeat for Barys, saw Ak Bars return to the Eastern Conference summit.

In Moscow, all the scoring came in the third period. Ak Bars grabbed the lead through Dmitry Obukhov, but Spartak levelled within seconds thanks to Igor Volkov. But in the 47th minute Kirill Petrov got the winner. 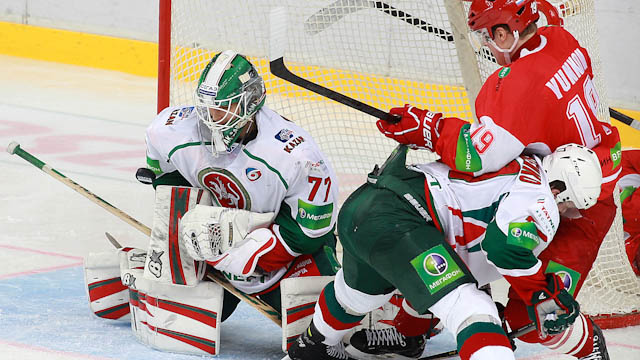 In Astana, meanwhile, Barys threw away a 3-0 lead to lose 4-3 to Sibir. Igor Ignatushkin scored twice for the visitor before Dmitry Monya got the winner.

The hero from the bench
Replacement goalie Sergei Mashkovtsev was Torpedo’s unlikely hero in a shoot-out win at Medvescak. Starting netminder Georgy Gelashvili managed a shut-out in regulation, but left the ice injured on 61:45. That left the 21-year-old, whose previous KHL experience totalled just 70 seconds of game time, to negotiate the rest of overtime and a shoot-out.

He managed both without conceding, and Vadim Krasnoslobodtsev finally found the net at the other end to give Torpedo the points.

Around the league
Avangard closed to within a single point of a play-off spot thanks to a 3-2 win over Metallurg Novokuznetsk. Sergei Kalinin scored twice, Dmitry Semin had two assists.

Avtomobilist continued its impressive form with a 5-2 home win over Admiral. Fyodor Malykhin extended his hot streak to six games in a row with the final goal of the night, Avto has now won six of its last seven.

Jakub Petruzalek’s 55th-minute goal was enough to give Amur a 3-2 win at Ugra.

In the West, Donbass climbed to fourth with a 5-3 win over Vityaz. The teams were locked at 3-3 until Lukas Kaspar’s second of the night broke the deadlock in the third period. Tuomas Kiiskinen wrapped up the points with five minutes to go.

Three goals early in the final session lifted Severstal to a 5-3 home win against Salavat Yulaev. Vladimir Antipov, Evgeny Kovyrshin and Pavel Dedunov’s second of the game left the visitor with too much to do.

Neftekhimik struck late to surprise Lokomotiv. After trailing 2-1 at the second interval, the visitor turned the game around with goals from Pavel Zdunov and Nikolai Belov. Roman Lyuduchin’s empy-net goal completed a 4-2 win. 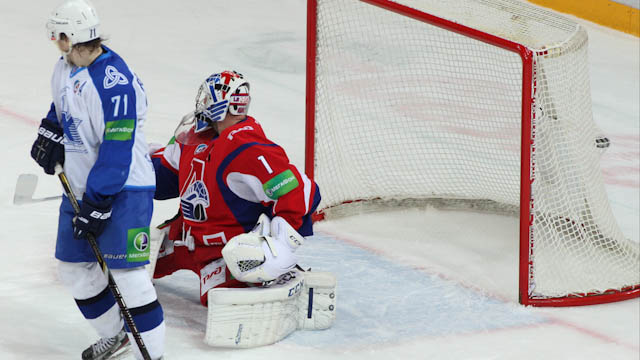